Last year, ADVC generated ~$2.8M of cash earnings power.  With a little bit of volume growth, modest pricing increases and operating leverage, I think this year we are going to generate ~$3.0M of cash earnings power in 2018 and $3.3M of earnings power in 2019.  This translates to $0.52 of FCFPS in 2018 and $0.57 in 2019.  In terms of market capitalization-to-earnings, ADVC trades for ~9.3x 2018E and ~8.4x 2019E earnings.  However, in terms of enterprise value-to-FCF, ADVC trades at just ~6.5x 2018E FCF and 5.9x 2019E cash earnings.  This is a very modest valuation to pay for a business that has a prettly long history of ~24% net margins, ~37% EBITDA margins, ~14% growth rate in earnings over the last 5 years, a very sticky customer base with basically a software product (electronic data interchange) enmeshed in the workflow and work habits of its customers.  Especially considering that ADVC has a debt-free balance sheet and yet ADVC is still earning 35% returns on average equity (again with a balance sheet loaded up with net cash).  This is especially cheap when you compare and contrast ADVC's business with some of its competitors, e.g., Park City or SPS Commerce, both of which trade at much higher multiples of EV/Sales.

Since the company went dark after the end of FY'2012, I have continued to receive financial statements.  Here are some of the key P&L stats.

Through its primary subsidiary, Edict Systems, ADVC provides an electronic data interchange (EDI) platform to retailers and manufacturers that helps them to manage inventory, shipping and purchase orders more efficiently and paperlessly.  It's hub customers include large companies Kroger and Honda.  Edict Systems gives its service away to "hub customers" for free in excahnge for making their suppliers transact on Edict Systems' EDI platform.  This has proved to be a very good--if nichey--business model over the years. 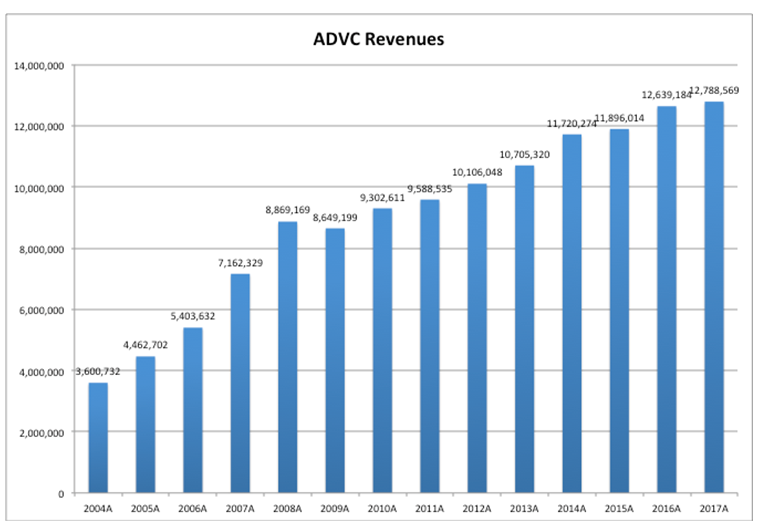 And it has grown in a capital efficient way, making only one acquisition over the period 2004-2017, earning very attractive returns on capital. 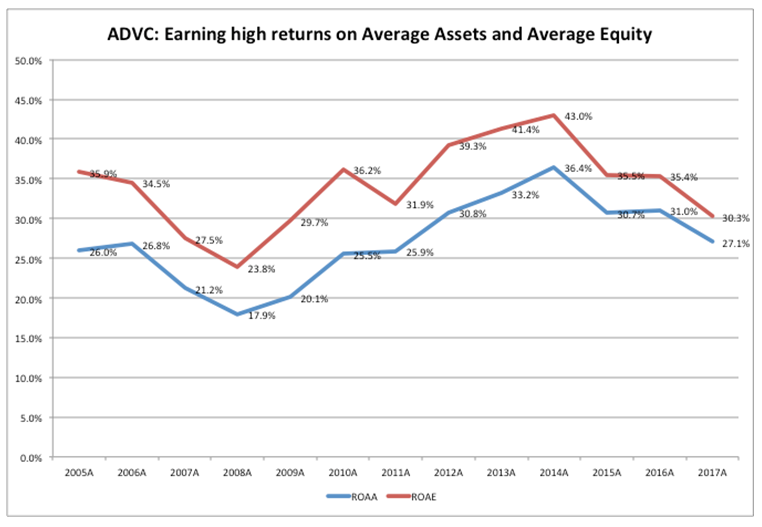 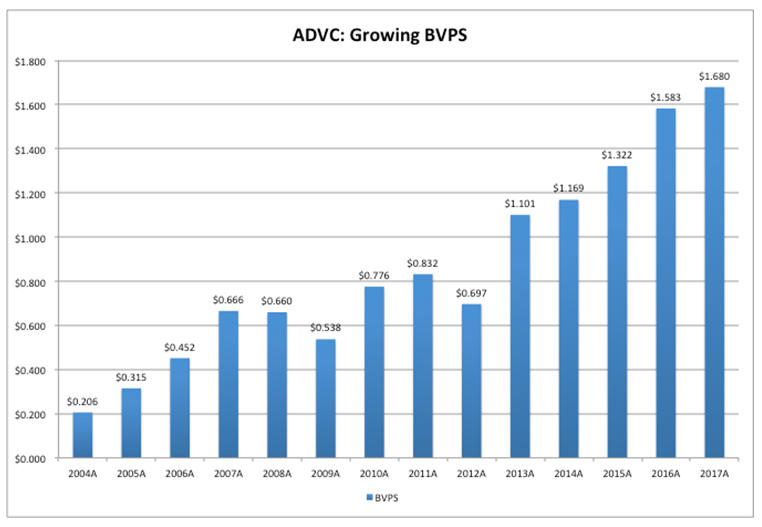 ADVC has managed to maintain an attractive (and increasing) EBIT Margin over the period as well, an indication of the quality of the product and value to the customers. 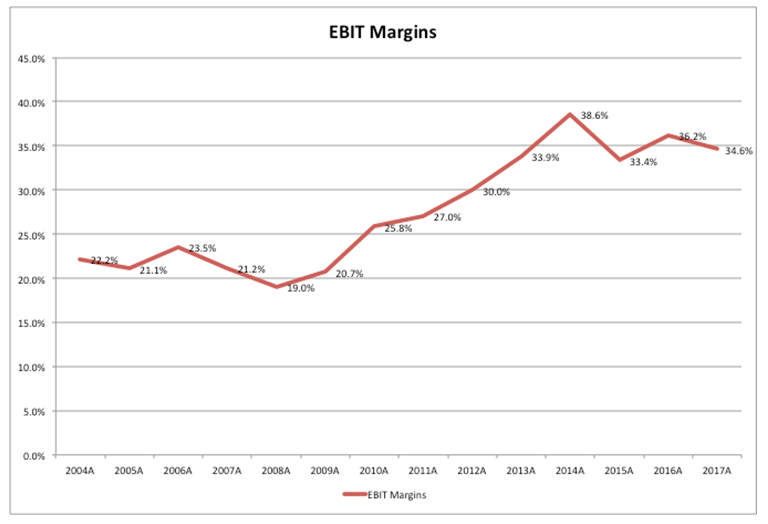 Combination of growing earnings power and shrinking share base has resulted in steadily growing FCFPS over the period. 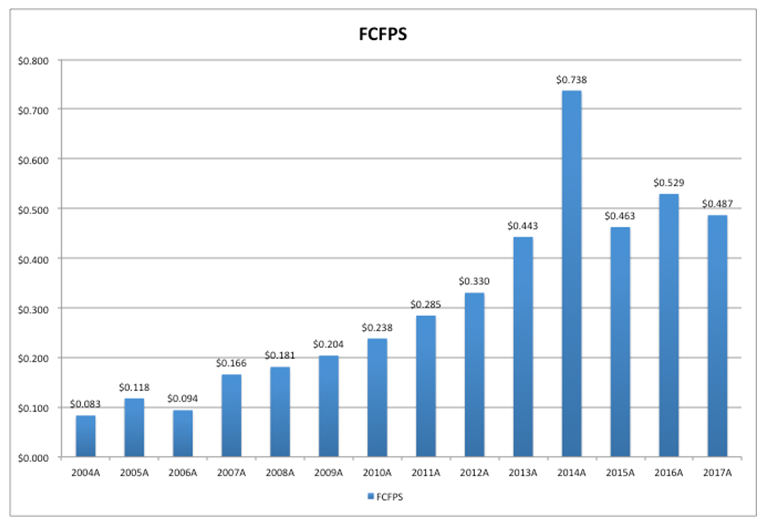 Looking at the business one other way, I think about that $12,788,569 of total revenue divide by the 6,000 active subscribers, each active subscriber generates ~$2,131 of revenue (on average).  $12,788,569 of total revenue divided by the 28,000,000 transactions annually, gets you to about $0.46 of revenue per transaction (average).  Think about the incremental cash earnings power that can flow into the business with even a modest 5-10% pricing increase on that $0.46 of revenue per transaction.  Much like the payment networks (Visa and MasterCard, or Adyen), ADVC is essentially a transaction processing company with very little incremental cost to process incremental transactions or take on incremental customers.  The operating leverage with modest pricing increases is potentially tremendous.  ADVC is a very modest cost to its customers so, theoretically, ADVC should be able to push through consistent and modest price increases over time.

Given a share price of $4.80 per share, you are getting $1.43 of BS cash and paying $3.37 for a business that will generate ~$0.52 of FCF per share this year.  Paying 6.5x EV / FCF.  However, if ADVC is able to raise price to $0.50 per transaction from $0.46 (~8% increase -- will probably happen gradually over a 2-3 years), all of the sudden because of the operating leverage the business could be earning ~$0.90 of FCFPS and is only trading at 4x EV/FCF in 3-4 years.  And that is holding transactions constant at 28M per annum.  I expect transactions to rise over time at ~3% per year clip.  So say, transactions were 30M and price was $0.50, you get ~$3M of incremental FCF, and the business would be generating ~$1.08 of FCFPS, that now means the business is trading at 3.1x EV/FCF.  Maybe this price increase takes a 2-3 years to push through, but that is very cheap.  Based on price increases and volume increases, I estimate earnings are on a smooth glide path to double in 3-4 years (I get a CAGR of somewhere between 17-24%).  What is the value of a business that is growing earnings at 17-24% and earning $1.08 per share?  Cash is now at $1.43 and I think that BS cash will build even with a dividend to $2.00 over the next 3-4 years.  So, let's put a 12x multiple on that 1.08 and that gets you to ~$13.00 +$2.00 of BS Cash +we are going to probably continue to get some dividends == Value is likely to be in the $15-16 range and I think it can keep compounding from there.  Further, this ignores the probably significant savings from the recently passed tax act which will further boost after-tax owner earnings.  So, suffice it to say, this is a classic example of a microcap company off-the-beaten-path (based in Beavercreek, Ohio, just outside of Dayton) that nobody is paying attention to, thus resulting in a huge discrepency between price and business value.

A little bit of background on the founder-CEO and largest shareholder... ADVC has been conservatively managed by the founder-CEO, Jason Wadzinski, for ~20 years.  He has grown ADVC slowly and deliberately without the use of debt.  Died-in-the-wool value investors will appreciate his bargain hunting prowess.  Years ago, there was a fluke murder at a bar-restaurant in Dayton, Ohio, near where ADVC's old offices used to be.  Wadzinski was expanding ADVC's headcount and needed to get new office space.  So this is about the time that this murder happened and he read in the Dayton Daily News about how news of this murder was negatively impacting the bar-restaurant's business and that it was going to go out of business, so Wadzinski bought the building and the land where this bar was and redeveloped it into ADVC's new offices.  He got the office space very cheap (he calls it, "getting the murder discount").  (I know the "murder discount" story because I worked for the construction company that redeveloped the property when I was in high school, ~16 years ago.)  Another fun fact for you value investors interested in scuttlebutt, Wadsinski is something of a serial entrepreneur and a motorcycle afficianado.  He opened a biker bar near ADVC's headquarters a few years ago and it has been a local success story.  Wadzinski got ADVC started with less than $10K and has bootstrapped it from there with excellent salesmanship and Midwestern work ethic.

As mentioned before, Wadzinski has displayed a bias toward paying dividends over the years, but he has also used cash to shrink the share base from 6,785,794 shares outstanding in 2008 to 5,812,341 in 2017.  Again, he paid out $12,115,302 in dividends and used $2,381,58 to repurchase shares over the period 2004-2017.  I have a bias against companies that pay dividends due to the (a) tax inefficiency and (b) I would rather a small company soak up incremental dollars in to high return projects internally that can grow the company's earnings power.  Unfortunately, I have not been successful in persuading Wadzinskin on this point.  In this case, despite the leakage, I call the dividend a "high class problem." 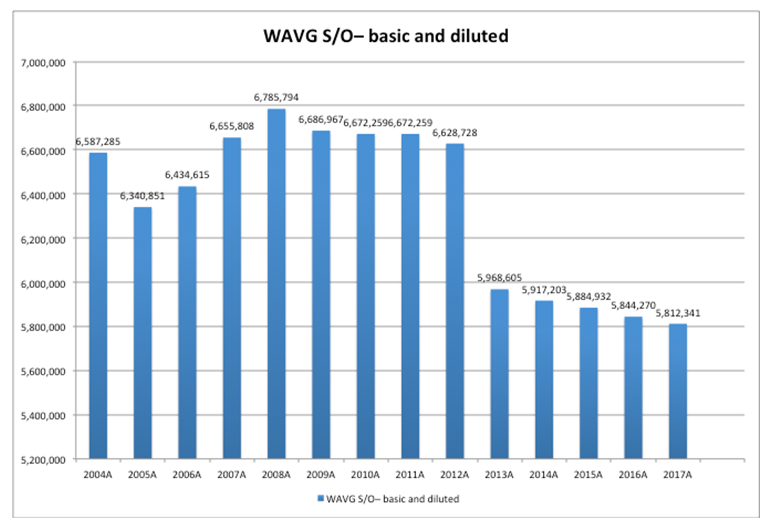 Wadzinski has actively shrunk the share base (increasing his percentage ownership) in recent years at cheap valuation levels in anticipation of an eventual monetization (e.g., sale to a strategic acquirer such as an SPS Commerce (ticker: SPSC) or Park City Group (ticker: PCYG).

Are you sure you want to close this position ADVANT-E CORP?

Are you sure you want to Flag this idea ADVANT-E CORP for removal?