Alleghany Corporation (Y) offers an attractive long-term buying opportunity. The company’s status as an orphaned security with minimal investor communication and analyst coverage in addition to concerns over significant catastrophe losses driven by Hurricanes Harvey and Irma have provided an attractive entry point at 99% of book value. Alleghany is an $8.4B market capitalization holding company that is predominantly focused as an insurance and reinsurance underwriter.  The company also has much smaller private investments through their subsidiary Alleghany Capital. Alleghany has a long legacy as a holding company dating back 87 years.  Initially the company was focused on the railroad industry and had industrial interests in legacy companies including MSL Industries, Jones Motors, and World Minerals.  By the 1960s, Alleghany had predominantly transitioned into financial services businesses and held interests in IDS, Chicago Title and Trust, and later Underwriters Re.  Prior to CEO Weston Hicks joining the company in 2002, then CEO John Burns sold “everything that wasn’t nailed down.”  Hicks notes that when he joined the company 70% of assets were in treasuries and Burlington Northern Santa Fe stock.  Management notes that today they are a reinsurance and specialty insurance group with a “differentiated asset management capability.”  Alleghany’s goal is to use insurance underwriting, public investments and private investments with a long-term goal of producing 7-10% growth in book value per share over time. 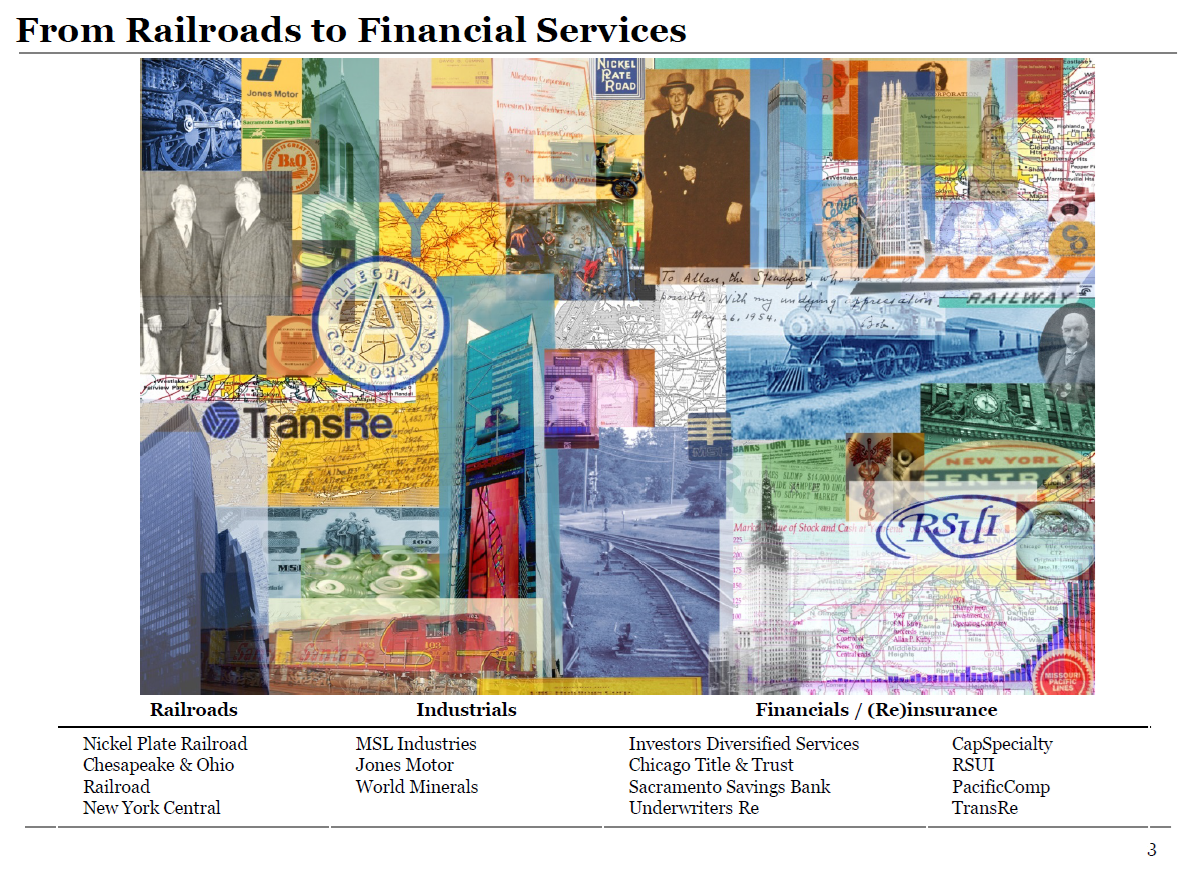 The investment thesis for Alleghany is based on the following points:

Reinsurance – The Reinsurance segment consists of TransRe, formerly known as Transatlantic Holdings that was acquired by Alleghany for $3.5B in cash and stock on March 6, 2012.  TransRe is a leading specialty professional reinsurer with a diversified offering of property and casualty products.  TransRe is headquartered in New York City with five locations in the US and other operations on a worldwide basis. In 2016, TransRe reported net written premiums of $4B, net premiums earned of $3.8B, a combined ratio 93.3% and pre-tax income of $580.5MM

TransRe utilizes both direct and indirect distribution.  In 2016, approximately 85% of TransRe’s gross premiums written were written through brokers with the balance written directly.  Aon, TigerRisk Partners, LLC and Marsh & McLennan were their largest brokers accounting for 25%, 20%, and 16% of gross premiums written.

TransRe utilizes a team underwriting approach of utilizing underwriters, actuaries, and claims staff.  TransRe will often conduct underwriting and claims audits at the offices of a ceding company before and after entering into major treaties as with their role as an insurer they are always tied to the quality of underwriting of the ceding company.  TransRe will often participate in treaty arrangements where the lead reinsurer on a treaty generally accepts one of the largest percentage shares of the treaty and takes the initiative in negotiating, price, terms and conditions.

RSUI is a specialty underwriter in the property, umbrella/excess liability, general liability, directors’ and officers’ liability and professional liability lines of business.  As a “specialty” insurer RSUI is focused on providing coverage for “hard-to-place” risks that generally do not fit the underwriting criteria of the standard market which provides coverages for largely uniform and relatively predictable exposures.

RSUI writes specialty business in the admitted specialty market through RIC, a New Hampshire-domiciled insurers in all 50 states and the District of Columbia where RIC is licensed and subject to state form and rate regulations.  Most of the risks in the admitted specialty market are unique and hard-to-place in the standard market, but must remain with an admitted insurance company for regulatory and/or marketing reasons.

RSUI writes business on an approved, non-admitted basis through Landmark, an Oklahoma-domiciled insurer.  Landmark is not subject to state form and rate regulations and has more flexibility in rates and coverages due to their coverage of specialized or hard to place risks.

RSUI distributes its coverage through 125 independent wholesale insurance brokers located throughout the U.S. and 29 managing general agents.  These wholesale brokers are appointed on an individual basis based on management’s appraisal of “expertise, premium production potential, loss history with other insurance companies, the size and experience of the agency, and on specific locations of a wholesale broker’s operations.”  RSUI’s top wholesale brokers – CRC and AmWINS Group accounted for 43% of gross written premiums in 2016 and their top five brokers were 68%.

RSUI has a strong underwriting culture and has reported a cumulative combined ratio of 82% since being acquired.  Management asserts that their underwriting is based on only handling lines in which its underwriters have expertise.  RSUI focuses on high-severity, low frequency specialty risks that can be effectively desk underwritten without the need for inspection or engineering reviews.  Underwriters are given significant authority and CEO Hicks believes that they have the best underwriters in the industry.  Underwriters are paid on profitability and not volumes.

Platte River is licensed in all 50 states and D.C. and operates in conjunction with CIC primarily providing surety products and offering pricing flexibility.

PacificComp is a result of the legacy Employers Direct acquisition.  Prior to June 2009, the company primarily wrote workers comp with a primary focus on California – specifically Los Angeles.  In June 2009, the company determined that is was unable to write business at rates that it deemed adequate due to the state of the California workers comp market.  They stopped soliciting business and sold the renewal rights to their business.  The company has now effectively relaunched under new management as a providers of workers comp through independent insurance brokers.  Premiums are still modest at $140MM and the group reported an underwriting loss of $2.6MM in 2016.

Corporate & Other – Corporate and Other is effectively a “grab-bag” of corporate overhead, allocated interest expenses, some investment gains and losses and Alleghany Capital.  Alleghany Capital allocated capital was $748MM at June 30th, 2017.  Alleghany Capital oversees private capital investments in non-financial companies.  The company’s strategy is to invest in closely-held businesses with meaningful cash generative abilities, where owners are seeking a long-term home for their business or patient capital to support growth.  Alleghany has also made “growth capital investments” in more speculative opportunities – specifically Stranded Oil Resources Corp (SORC).  In 2016, Alleghany Capital’s Manufacturing and Services businesses generated $51.5MM in adjusted EBITDA.  This was offset by $14.1MM in negative adjusted EBITDA from SORC and -$12.3MM from corporate and other expenses.

Alleghany has had positive reserve development each year over the past decade and in the first six months of 2017 implying that book value is conservatively stated.  Additionally CapSpecialty and PacificComp have generally reported underwriting losses over the last several years, weighing down the aggregate combined ratio.  Below is the company’s reserve triangle from the 2016 10K.  This is clearly a company with sound underwriting discipline, redundant reserves and a book value that is likely understated.

Alleghany is overcapitalized and has a sound balance sheet.  Debt to capitalization is 15% and is only 8% on a net basis.  The company has a total investment portfolio of $17.9B relative to common equity of $7.9B and tangible common equity of $7.6B.  Net written premiums to common equity is only .59x on a LTM basis.  There is significant room to increase writings with no needed capital in a more favorable environment.  Regarding the breakdown of total investments 71.6% of investments are in debt securities, 17.7% are in equities, 3.8% are in short-term investments, 3.4% are in commercial mortgage loans and 3.5% are “other invested assets.”  Within other invested assets, there is a $210MM equity stake in Ares Management with an agreement to engage Ares to manage up to $1B in certain investment strategies.  Alleghany also has an ownership interest in Pillar Capital Holdings, Limited, a Bermuda-based insurance asset manager focused on collateralized reinsurance and catastrophe insurance-linked securities.  The Pillar investment is $226.5MM.  The duration of the fixed income portfolio is 4.5 years, average credit quality is AA- and the annualized investment book yield is 2.3%.  Regarding equities, the company has a $2B “core” portfolio where the largest eight positions account for 70% of the portfolio.  The top eight holdings are Google, JP Morgan Chase, Visa, CSX, Microsoft, Comcast, Roper, and Amazon.  They have an additional $1.4B in passive equity strategies.