We believe that American Renal Associates (ARA) is an attractive short position with 50% downside to our estimate of intrinsic value.  The key aspects of our thesis are:

1.       Industry:  The dialysis business (and American Renal in particular) utilize a deceptive relationship between the facility operators and the American Kidney Foundation (AKF) where the operators make donations to the AKF in return for the AKF to steer patients away from low-priced government plans and into high-priced commercial insurance plans where the AKF either pays the premium or makes other charitable assistance for patients

2.       American Renal is most vulnerable to reimbursement pressure because of its relatively small size, its high leverage and its JV-structure

5.       Valuation is stretch on any fundamental metric

We believe that at even a generous valuation of 15x actual FCF of $23 million would yield a $350 million equity value / 35 million fully diluted shares = $10 per share or over 40% downside.  It is not inconceivable to see American Renal become insolvent if reimbursement pressure becomes more severe.

1.    The deceptive relationship between the dialysis industry and the American Kidney Foundation/Fund

The dialysis industry has some quirks that have allowed incumbent operators to exploit the relationship with the main industry charity – the American Kidney Foundation.  In brief, the 3 major dialysis facility operators (Davita and Fresenius are the two largest by market share) have been making charitable contributors to the American Kidney Foundation in return for the AKF steering patients away from low-priced government insurance (where the dialysis operator receive the Medicare rate of $248 per treatment) to higher-priced commercial plans that charge up to $2,000 per treatment for the same exact procedure.  This industry practice began receiving more attention in recent years and was the subject of a few notable articles, investigative journalist reports and even a skit on John Oliver’s show on HBO. Notably, insurance companies began to take measures to stop this practice, with Aetna suing Davita and UnitedHealth suing American Renal (more on this later). The following links (particularly the SIRF report) provide the most comprehensive background on the industry and the relationship with the AKF.  We are happy to answer additional questions in the Q&A:

2.    American Renal is the most vulnerable due to its smaller size, higher leverage and its reliance on joint-ventures

For these reasons, American Renal will be more susceptible to any reimbursement or legal/regulatory pressure in the industry.

Centerbridge owns 54% of American Renal’s shares and has not sold shares since bringing the company public at $22 per share in 2016.  On March 26, with ARA’s stock right the IPO price at $21.82, American Renal announced that Centerbridge was planning on selling 5 million shares (out of the 18 million held) and ARA’s stock dropped over 15% in the subsequent 2 days.  Two days later, American Renal announced that the equity offering was withdrawn. We think that Centerbridge is eager to sell their shares and a strategic exit is very unlikely given the large market share concentration of the two main larger competitors.  Centerbridge’s holdings and price sensitivity should serve as a ceiling for the stock.

While this lawsuit is ongoing in various jurisdictions (mainly Florida), UnitedHealth just initiated a related lawsuit in Massachusetts with some more pointed allegations, notably that the put-options that were granted to its nephrologist JV partners in connection with its IPO violated federal Anti-Kickback regulations.  In 2014, Davita paid a $406 million fine for similar violations of the anti-kickback statute (see page 50 of the DVA 2017 10K: https://www.sec.gov/Archives/edgar/data/927066/000092706618000030/dva-123117x10k.htm). While the potential damages from both lawsuits are very serious, we believe the greater risk is that commercial reimbursement rates are lowered by payors.  Since dialysis facilities make all of their profits from their small portion of commercial treatments, American Renal is very sensitive to the commercial reimbursement rate:

American Renal likes to tout a metric called “EBITDA less non-controlling interest (NCI)” which they feel represents the cash flow to the company.  We strongly disagree with this approach for a variety of reasons:

First, EBITDA does not equal unlevered pre-tax cash flow.  Dialysis facilities require significant capital expenditures and EBITDA less NCI does not account for this.  American Renal states that “maintenance capex” for 2017 was $6.4 million but this number is extremely understated.

Second, “EBITDA” and “non-controlling interests” are an apples-to-oranges comparison.  EBITDA is an unlevered and pre-capex and pre-tax figure. Non-controlling interests is a share of the profits of each facility – after routine maintenance capex and other facility level charges, such as clinic-level debt service.  In our view, the appropriate calculation would be a proportional EBITDA based on the facility equity interest or (more appropriately) a simple free cash flow calculation that demonstrates the true recurring “owners earnings” of these dialysis facilities.

Lastly, given the high level (particularly the debt allocated to American Renal’s parent company), we think it is inappropriate to use EBITDA.  We believe there is a reason why a private equity chooses to highlight a figure such as EBITDA less NCI but we think it is wrong. That being said, even on EBITDA less NCI, American Renal is valued much more richly than its larger, more stable peer Davita: 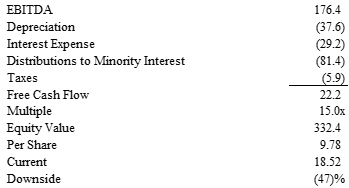 Additional Topics to be discussed in Q&A 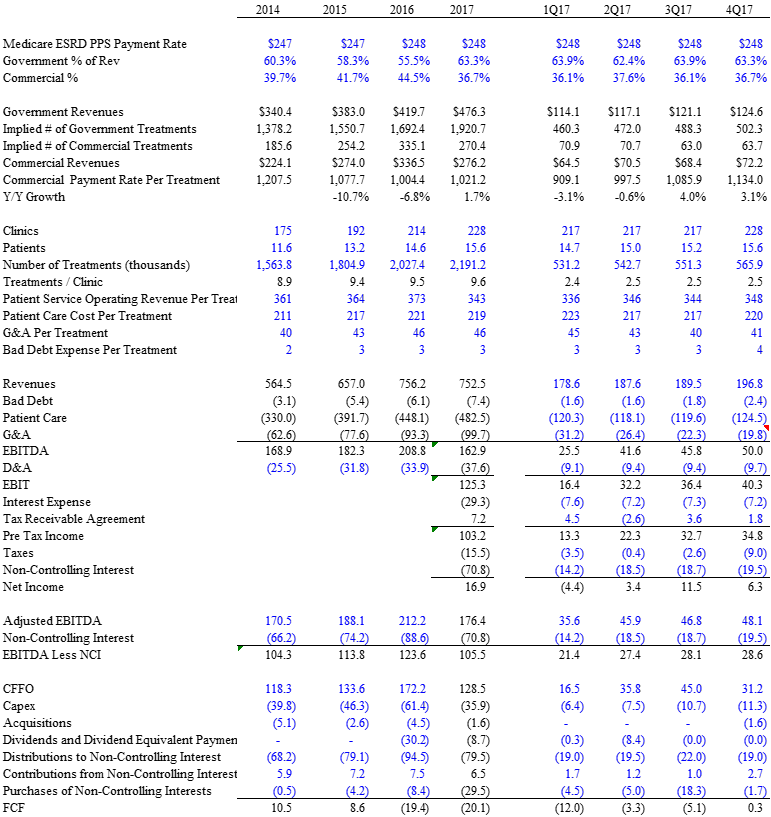 Are you sure you want to close this position AMERICAN RENAL ASSOCS HLDGS?

Are you sure you want to Flag this idea AMERICAN RENAL ASSOCS HLDGS for removal?