Recent History: Historically Boardwalk transported natural gas from Western Texas and the Gulf Coast up to the Northeast US to satisfy significant power demand in the major population centers.  Due to the rise of abundant gas flowing out of the Marcellus, within the past five years the Northeast no longer needed to import gas from elsewhere in the country.  In fact, the Marcellus now produces a surplus of gas and now needs an outlet out of the Northeast (more on that later).  As South-to-North contracts have rolled off over the past five years that capacity was not re-contracted putting strain on BWP’s cash flows.  Boardwalk’s stock price topped $30 in October 2013.  In February 2014, BWP opted to cut its distribution 80% causing the stock price to fall 60% to $12.  BWP stock settled and increased to a $15-18 range where it has traded for the past two years.  BWP was written up in March of 2014 at its lows by egec who recommended an exit a month later after the stock had popped 25% though.  Correctly, egec predicted that despite the obvious value in the stock, the market would not re-rate BWP for several years.  This write-up will give an update on what’s happened since early 2014 as well as give some more detail on contracts and growth projects.  I will also make a case that now is the best time to buy BWP in the past 10 years as there exists a massive upside/downside skew with a hard catalyst coming in 2018 and the stock is largely ignored by the market.

Investment Thesis & Variant View: MLPs have traditionally paid out all available cash flow and raised equity and debt to fund growth capex which BWP did for many years.  In February 2014, Boardwalk management (51% owned and controlled by Loews Corporation) determined it would be least dilutive to reduce distributions to fund equity needs.  That strategy was ultimately followed by several MLPs, including Kinder Morgan but it initially backfired.  MLP investors tend to use a simple yield + growth valuation model to evaluate MLPs.  Despite the obviously misguided conclusions, they tend to take the yield and add the most recently guided distribution growth rate and use that to compare MLPs.  (See Kinder Morgan’s 5% plus 10% growth guidance implying a 15% annual return…later cut drastically.)  After announcing the distribution cut, BWP stated they would not raise the distribution until they had finished funding their growth capex program and debt/EBITDA was comfortably and sustainably under 4.5x.

Thus, despite the highest distributable cash flow yield in its peer group, Boardwalk’s yield + growth currently looks like 2.5%+0%, which is why the market and the sell-side is ignoring their fundamentals (average price target is $20 by sell-side).  This will significantly change in 2018 when BWP reinstates what will likely be a 6-8% yield growing 10-15% per year causing the stock to re-rate to $27-36, implying 60-120% upside including cash distributions.  I believe in BWP’s growth projects because the majority of the capex is low multiple retrofitting of existing pipes to turn the gas flow from North to South to alleviate the glut of natural gas sitting in the Marcellus and management has consistently outperformed both their own guidance and street expectations.

Valuation: Boardwalk trades at 9.8x EV/EBITDA and an 11.3% DCF Yield significantly cheaper than its peer group despite having low leverage (4.4x) and perhaps the highest ratio of long-term take-or-pay contracts (80%) and visible distribution growth within its peer group.  For comparison, the peer group trades at 12x EV/EBITDA, an 8.1% DCF Yield and is levered 5.6x debt/EBITDA.  I believe this discount is due entirely to BWP’s low cash payout and I believe that BWP will re-rate when they reinstitute their distribution.  Based on my model, I think this should occur in 2018 with the stock potentially reacting one year in advance as the sell-side updates its models.   Given a slightly longer investment horizon (2 years) and assuming BWP re-prices to a 6-8% yield I believe BWP is worth between $27-36/sh or 1.6-2.2x the stock price today excluding cash distributions which could total another 0.2x return.

BWP’s counterparties tend to be investment grade supply pull power plants and LNG hubs which are both in high growth mode and better credit risks than demand push E&Ps.

The best types of assets to have in midstream energy are the long interstate highways that take gas over multiple states to major processing hubs.  They are difficult to permit and once in existence often operate as a regulated monopoly.  BWP owns several interstate pipes running from the Gulf Coast up to the Northeast that are impossible to replicate.   They simply need a couple years to add additional compressors to reverse the flow of gas from the Northeast down the Gulf Coast and these high value properties will be maximizing cash flow again.  (This time, BWP made the pipes bi-directional, just in case this happens again).

Re-contracting: BWP has a looming contract expiration on Gulf Crossing in 2019.  Currently there exists very little differential between the origination and destination side (East TX -> LA) of this pipe so bears point to this as a major negative.  There are several mitigants.  First to put numbers to it, the amount of revenue expiring in 2019 is $180mm.  Assuming current EBITDA margins, this represents approximately $100mm of EBITDA on a $750mm EBITDA base.  EBITDA is set to increase by $200mm over the next 3 years from contracted projects.  In addition, the gas still needs to flow out of East Texas so the current expectation is that instead of paying $0.40/mcf, BWP will have to drop the rate to $0.10/mcf which keeps enough revenue to offset $45mm in decline.  In addition, BWP has acknowledged this issue and has been working on it for a couple years and still has three more years to repurpose the assets.  They have hinted that they are working with various LNG companies to provide their required throughput.  To this point, last year they signed a 20year contract with Freeport LNG which repurposed much of their Gulf South pipe.

Counter-party risk: This has come up in several recent cases with other MLPs.  BWP has prudently contracted with utilities and LNG offtake companies trading lower rates for better counterparty risk (vs contracting with independent E&Ps).  BWP is not immune however and recently lost about a 1/3rd of the contracted capacity on their planned growth project called the Northern Supply Access due to the bankruptcy of the customer.  Fortunately, this was a retrofit project that was still in permitting phase so it was simple enough to reduce the amount of compression on the pipe saving the majority of the funds but keeping the permits for potential additional capacity for future use.

Maintenance capex: Under investing in the existing infrastructure to hit cash flow goals is a risk that has been brought up in the MLP space especially with regard to Kinder Morgan.  Given the attitude of management toward their distribution, it would be surprising if they would be underinvesting as a policy.  As a quick gut check BWP has about 10% as much midstream assets as KMI but spends about 25% as much on maintenance capex. 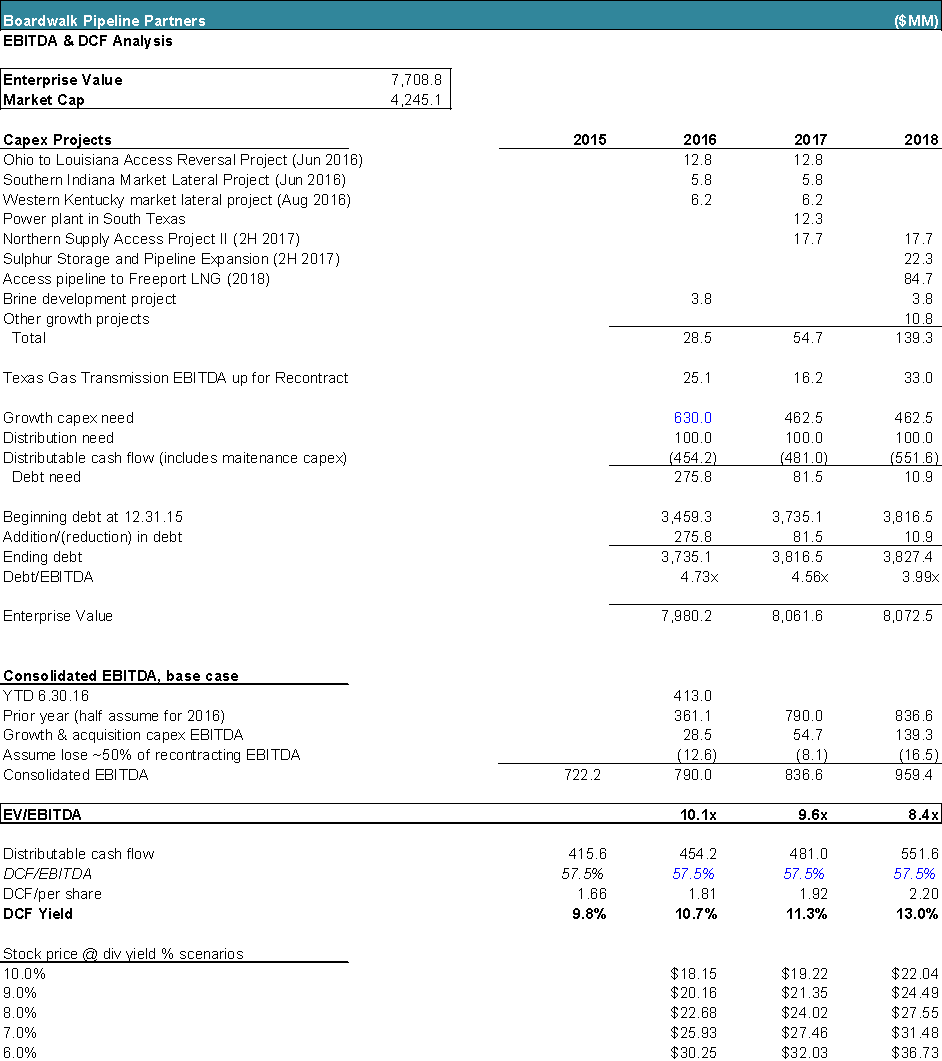 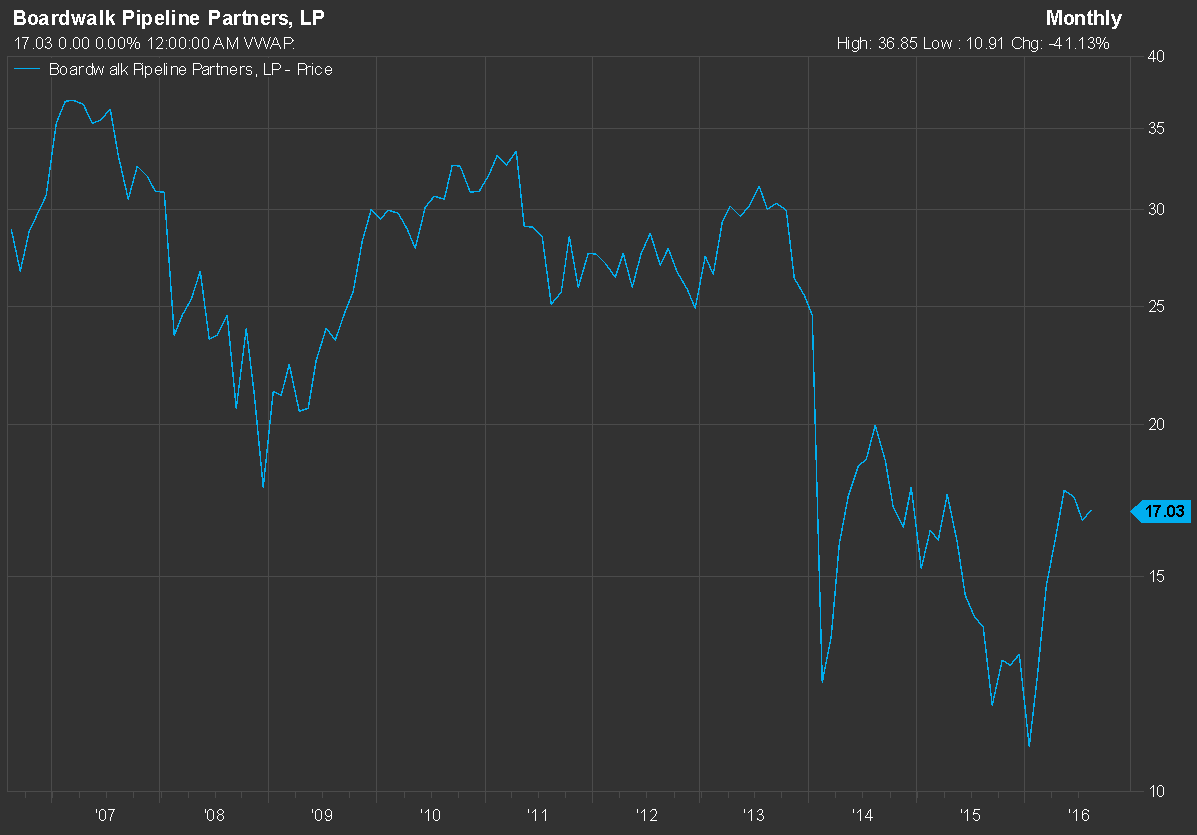 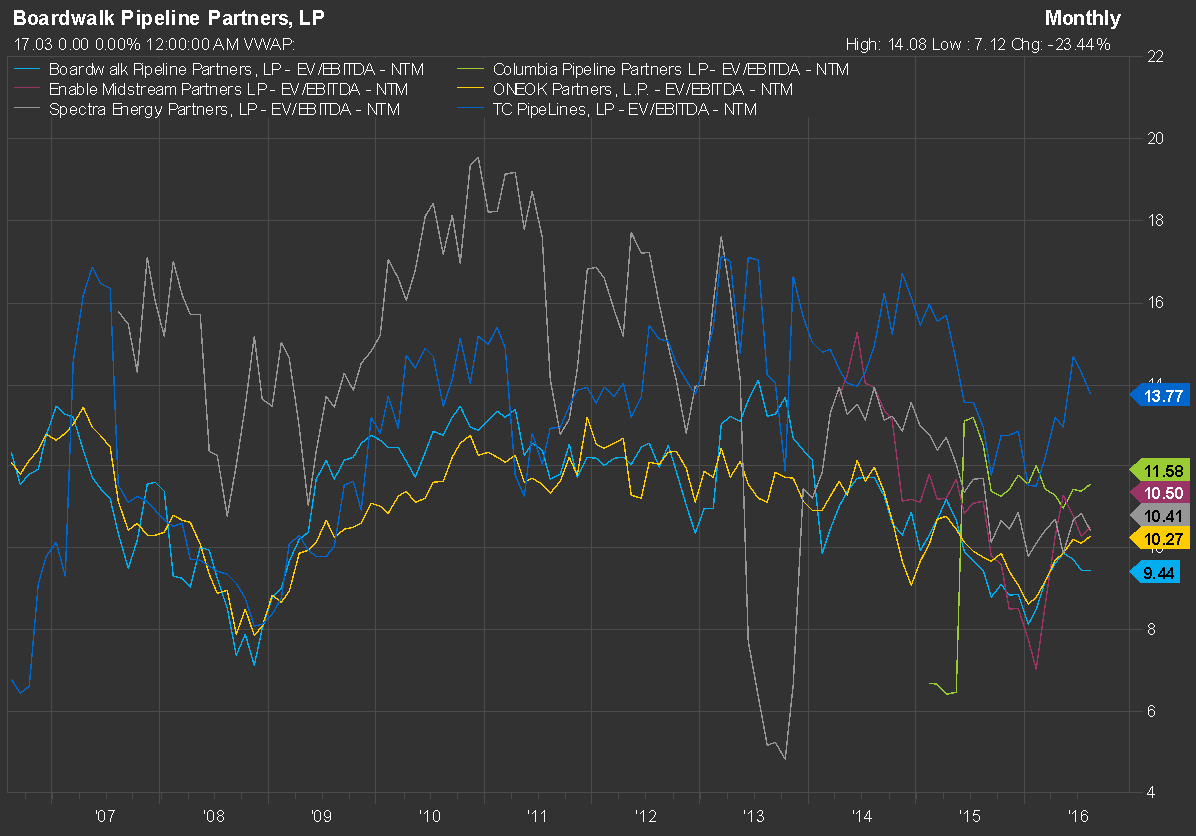 Are you sure you want to close this position BOARDWALK PIPELINE PRTNRS-LP?

Are you sure you want to Flag this idea BOARDWALK PIPELINE PRTNRS-LP for removal?