CSAL was written up by Fletch back in July, 2015 at around $22, with a target price of $32.  The stock surpassed his target last year, and has since sold off pretty dramatically to $26, creating a stock with an asymmetric risk/reward and a 9% dividend yield.

I won’t go into a lot of detail on the history and formation of the company, Fletch does a good job explaining this.  In short, CSAL was a spin-out of Windstream, a Rural Local Exchange Carrier - who at the time of the spin was over-levered and needed to cut its dividend.  Instead, it surprised the market and created a triple net REIT - CSAL - whereby they did a sale/leaseback of all the copper, fiber, electronics and distribution systems in the network to CSAL.  WIN levered up CSAL, took the debt off the shoulders of WIN, and retained a 30% stake in CSAL.  WIN has a 15 year lease for the network with CSAL, paying $650 million / year to the company, with a sad 0.5% / annum escalator starting after year 4.  For GAAP purposes, the revenue is recognized on a straight-line basis over the course of the lease.  Since then, Windstream has sold off or done debt exchanges to reduce its ownership in CSAL to 0 - while also diversifying its own business by announcing a deal to acquire Earthlink.  Windstream will see its leverage fall to 3.2x (from 3.7x) post the Earthlink acquisition which should close mid 2017.

The risk to the CSAL payments from WIN is low - as CSAL is effectively the most senior lender to Windstream.  Even if WIN was forced to cut its dividend or even defaulted on debt, in order to keep the business operating it would still have to pay CSAL its $650 million / year through any bankruptcy.  Its also worth noting that any capital Improvements made to the network by Windstream, including overbuilt fiber, automatically become assets of CSAL under the master lease agreement.  As of the Q3 call, the CSAL benefitted from $181 mm of tenant improvements from WIN.

CSAL will continue to make acquisitions in 2017 - with a pretty robust pipeline of opportunities - including a potential deal with Windstream around the soon to be acquired Earthlink assets.  CSAL, originally laid out a business plan to diversify its business away from Windstream with a mid-long term goal of 50% diversification.  The company targets wireless infrastructure businesses - specifically fiber (dark and lit), wireless towers and wireless tower ground leases as well as other triple net sale/leaseback structures.  While the company was spun with 100% of revenue attributable to WIN, it is starting 2017 with about 20% of its business derived from external wireless infrastructure businesses.  A potential Earthlink deal would take them further away from diversification - but would add scale and potentially provide an opportunity to structure a transaction in a more beneficial way for CSAL, given it would now be at arms length, rather than at WIN terms.  It could allow them a more robust escalator, or additional growth opportunities.

The company has made 3 sizeable transactions over the past year, 2 on the fiber side and 1 on the tower side.

Mix of future deals in pipeline

The stock traded off from a high of $32.73 it hit back in September to a low of $24 in November post election.  A few reasons we believe have led to this: 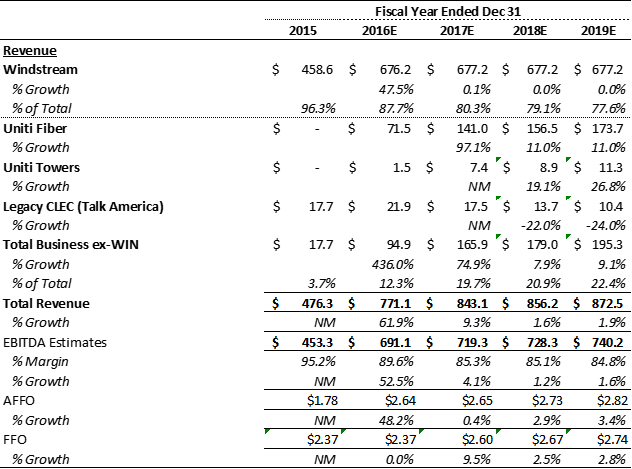 The business is not sexy, but it is an orphaned asset, trades with a 9% dividend yield, 10x AFFO and 11.5x EBITDA.  The Triple Net REITs - the closest comparable -  trade at a 5.3% dividend yield, 15x AFFO and 17x EBITDA.  WIN has a dividend yield of 7.5%, 150 bps inside CSAL despite its dividend being subordinated to the lease payments owed to CSAL.  Further, WIN 5 year debt trades at 7.8%, 120 bps inside CSAL dividend yield and 130 bps wide of comparable CSAL debt at 6.5%.  As mentioned before, this is important to note b/c as I mentioned above because CSAL effectively is a senior lender to WIN.

Ascribing a 7% dividend yield, and 13x AFFO multiple - still a large discount to the Triple Net REITs, the company would be at $34.50, and provide a total return of 39%.  If it could trade to 14x with further diversification (I don’t factor in any additional M&A), it would be a $37 stock, with a 49% total return.

Are you sure you want to close this position COMMUNICATIONS SALES &amp; LSNG?

Are you sure you want to Flag this idea COMMUNICATIONS SALES &amp; LSNG for removal?