In August, Craft Brew Alliance (ticker: BREW; CBA for this article) announced a deal to expand their distribution agreement with Anheuser-Busch (AB). The agreement was complex, but what really interested me about it was the agreement included a framework for AB to acquire CBA. Per the 8-K,

I kept turning my wheels on that buyout clause and wondering why either party would put it in there unless AB was truly serious about acquiring CBA. And the more I thought about that sale arrangement, the more I was reminded of this VIC write up by Charlie479. The underlying thesis of that write up was fantastic, but I’ll boil it down to this: AmBev exchanged some of their operations with Quinsa and took an equity stake in them as a result; in addition, AmBev got a put/call option that allowed them to acquire Quinsa for a predetermined price that was significantly higher than the price Quinsa was trading at.

The similarities between Quinsa then and CBA now are striking. Agreed upon buyout offer formulation at a price higher than today’s? Check.  Strategic acquisition target? Check. AmBev is the buyer and already owns a minority stake in the target? Check (AmBev, which bought Quinsa, has evolved into AB through mergers and currently owns ~1/3 of CBA).

The deal between CBA and AB is pretty complex, but there are three main pieces to it (in addition to the buyout clause): the amended master distributor agreement, the contract brewing agreement, and the international distribution agreement.

To me, the bottom line is the deal clearly incentivizes both sides to merge sometime before August 23, 2019. On CBA’s side, AB can hit them for pretty significant penalties (cancellation of all the one time payments, pulling their distribution agreement) if CBA declines to be acquired by AB after AB makes an offer. On AB’s side, those onetime payments for international rights are pretty significant and the overall terms of the deal are pretty generous to CBA. Given the market cap of non-AB owned CBA shares would be ~$325m at a share price of $24.50 (the minimum takeout price in 2018), I can’t see AB looking at that $20m incentive fee in 2019 and thinking it makes more sense to pay that fee versus buy all of CBA, particularly once the substantial potential synergies from taking CBA in house are factored in.

So the upside here is pretty obvious. AB seems pretty interested in acquiring CBA based on this contract, and if AB bought CBA out currently, it would be for “not less than” $22/share. Shareholders would obviously be pretty happy with that outcome given shares are currently at ~$13 (assuming the offer comes before that $20m payment is due in August 2019, the IRR from today’s prices ranges from >30% on the low end to well over 100% on the high end depending on the timing of the offer). Management would make out pretty well too: they updated their CoC payments in May 2016 to provide a pretty nice payday if they get bought out.

I’ll dive into the business in a second, but given all that is public information (CBA even highlights the buyout agreement in their IR presentations), it’s worth asking real quickly: why does this opportunity exist? I think there are three main reasons: 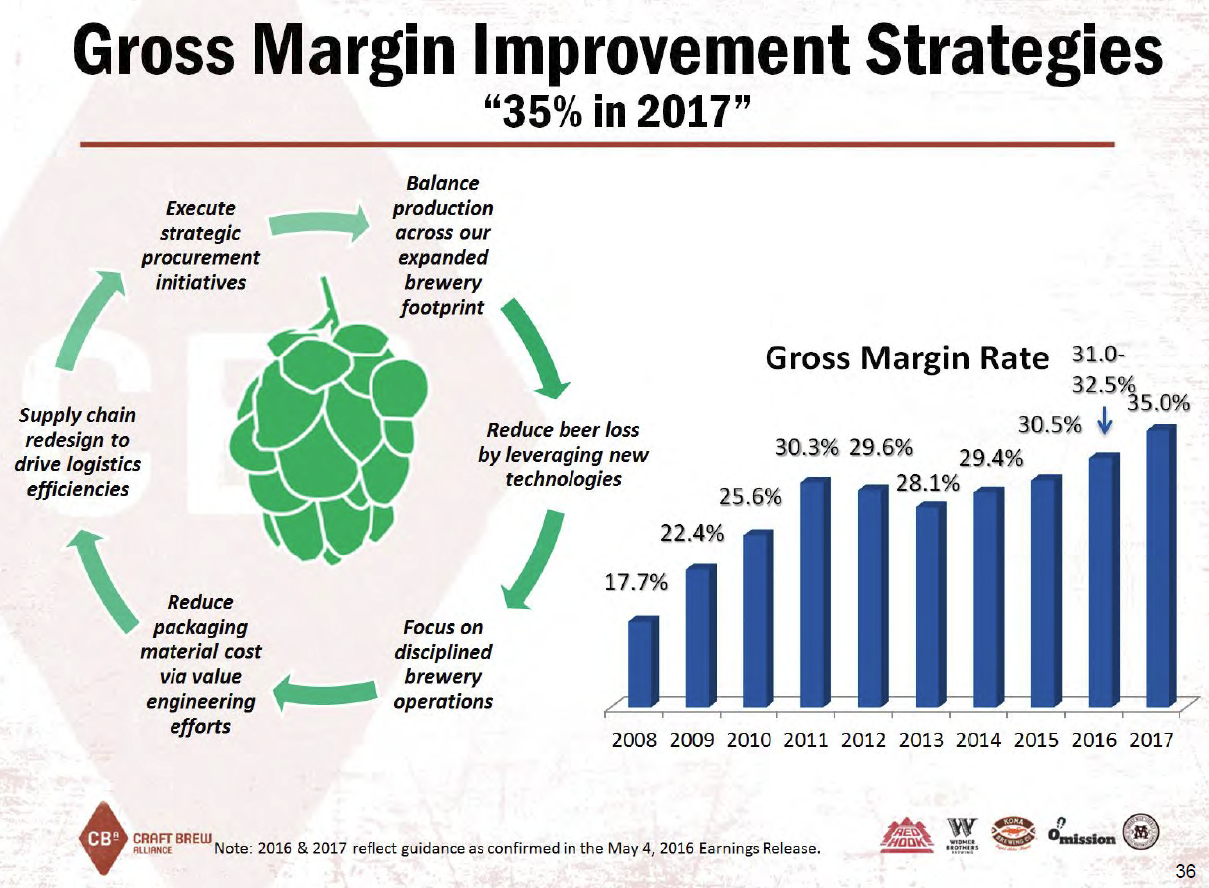 Alright, so let’s dive a bit deeper into CBA. As you might guess from the name, CBA is a craft brewing company. Their major brands are Redhook (Seattle area), Widmer (Portland), and Kona (Hawaii). They also have Omission, which is the largest Gluten Free beer with ~45% market share of an admittedly extremely small market.  All in, CBA measures themselves as the 6th largest craft brewing company; I’ve got some issues with the way the chart below is set up since it gives companies credit for every beer the own, but however you cut the data CBA is a major player in the craft space and Kona is one of the biggest brands in craft beer. 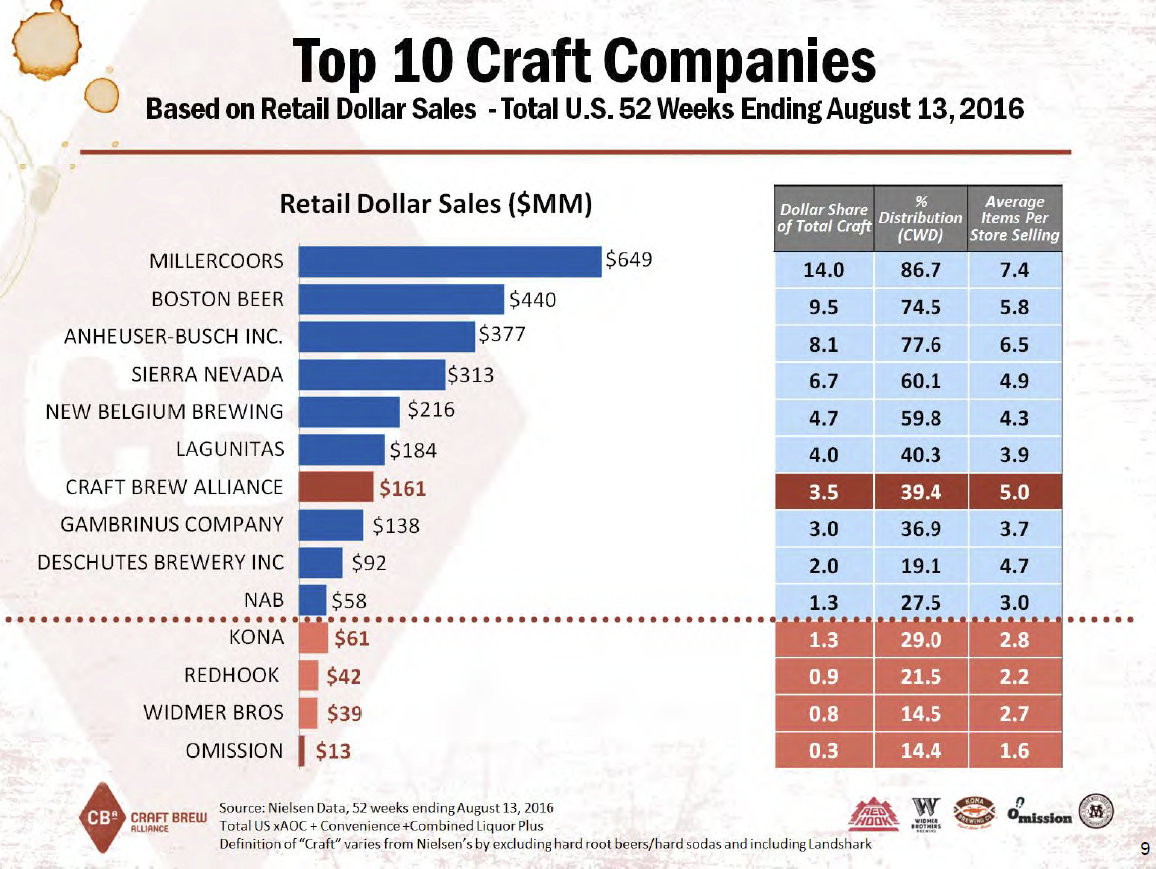 Until late 2014 / early 2015, CBA was focused on growing all three of their brands into national brands. However, as the craft segment got more competitive, CBA adopted their “Kona Plus” strategy: the Kona brand would be their flagship national brand, and they would “retrench” Widmer and Redhook from national sales to focus more on their local markets. To replace the lost sales from Widmer/Redhook in their non-home markets, CBA would begin striking up alliances with interesting local brewers that took advantages of the local brewers’ brand strengthen and CBA’s distribution with AB. The retrenchment decision has had a big impact on their financials: while the Kona brand has seen continued strong growth (shipments up high teens annually) the other two brands have seen strong declines which has led to a relatively stagnant total shipments / revenue numbers for CBA for the past few years.

Ok, so you’ve got a business that has shown flat growth for several years and a management team with little to no credibility with the street at this point. Aside from the possibility of a buyout, what makes CBA attractive today?