We recommend a long position in the shares of Firstgroup PLC (“Firstgroup” or “the Company”).  Firstgroup is a leading transport provider in the U.K. and North America with operations across five divisions:  First Student (North America school bus), First Transit (Private sector provider of public transit), Greyhound, First Bus (UK bus operator) and First Rail (UK rail).  The Company’s business mix provides both 1) leverage across a common infrastructure, skill set, and expertise and 2) diversification across geography, customer base, and service offering.  We note the shares are down ~10% after the Brexit referendum, however; ~65% (73% of estimated FY 2017) EBITA is based outside of the UK.  We believe these earnings should be both relatively insulated from EU related macro issues and benefit from the translation effects of the decline in the British Pound post Brexit (down ~12%).

The Company is poised to benefit from a number of near term and longer term tail winds:  1) margin recovery in First Student 2) unwinding of unprofitable fuel hedges 3) optionality on future rail franchise wins 4) addressing losses in Greyhound Canada.  The stock offers a compelling value at these levels, trading at a consensus forward EV/EBITDA multiple of 4.2x and 7.8x PE (4.3x and 7.9x based on our estimates) vs. 4.8x and 10.1x consensus EV/EBITDA and PE for its peer group.  We set a 1 year forward price target for the shares of 1.58 pence (based on DCF) implying a multiple of 10.6x PE multiple (ex cash and adjusted for amort) and 61% upside from the 6/29 closing share price.

Operational Turnaround:  The Company is in the process of driving an operational turnaround in a number of its divisions.  Below we provide a summary of the Company’s FY 2016 EBITA margins, the Company’s medium term targets, and the margin assumptions driving our forecasts.  Our forecasts are currently only giving the Company credit for success in First Student.  We provide some margin uplift for Greyhound related to fuel savings (which we detail later in the write-up).  There is potentially meaningful upside to our target price if the company were to achieve incremental margin uplift in UK Bus and Greyhound beyond our targets.  We note that progress on the respective turnaround plans has been slow to date. This partly reflects a change in the industry backdrop, notably slowing UK bus revenue trends reflecting the continued contraction in UK high street retail footfall, the collapse in the oil price affecting demand for public transport services (fuel hedges in place limiting cost benefit) and the tightening in the US job market leading to driver shortages and above inflation labor cost increases. 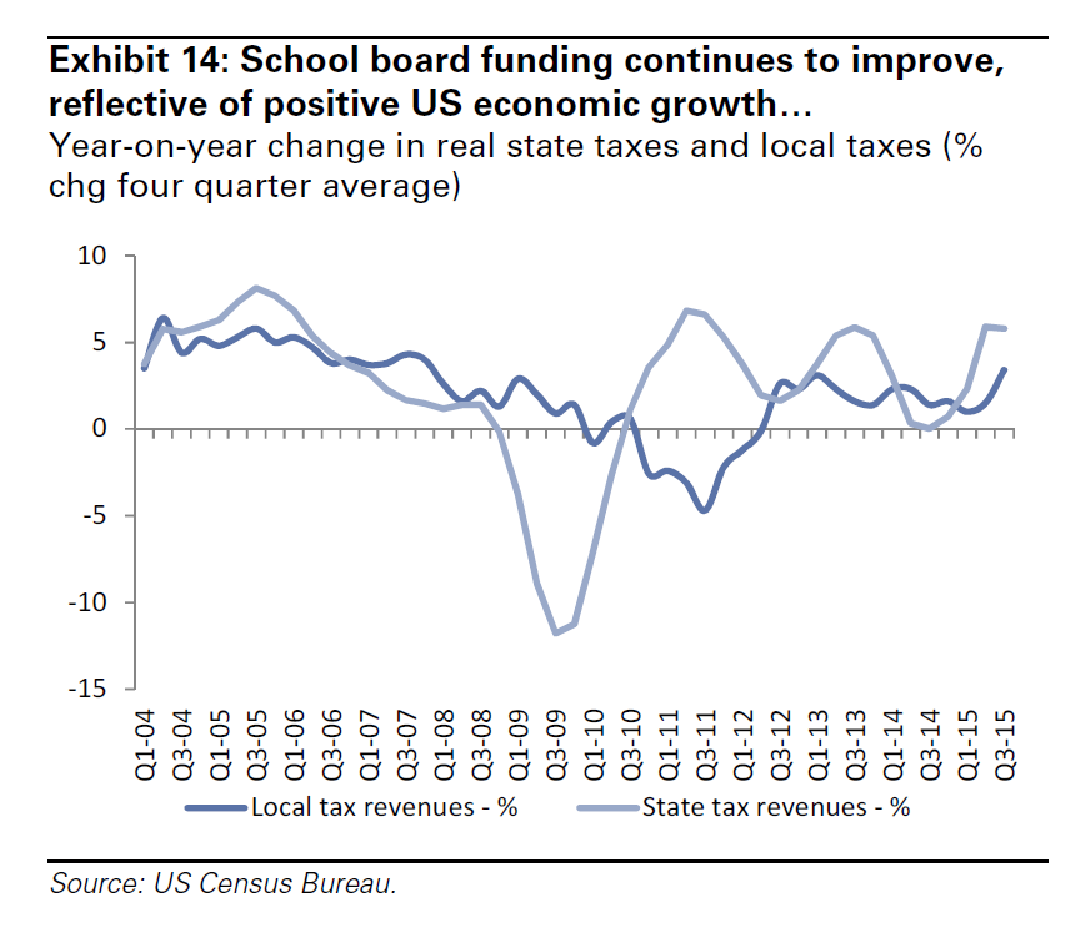 First Student has been in the process recapturing margin through 1)  overhead cost reductions 2)  asset rationalization 3)  process re-engineering 4)  pricing uplift on underperforming contracts up for renegotiation.  The main drivers of margin expansion in our model are: 1)  normalization in operating days between 2017 and 2016 (GBP ~17m in uplift) 2) overhead reduction (GBP ~17M remains on current program) and 3) Fuel savings.  We note the Company has been successful in driving revenue and margin uplift from contract renegotiations as price increases averaged 5.3% in 2016 and 4.5% in 2015 with 94% contract retention across the portfolio.  However, labor conditions have tightened in the U.S. and assume much of this benefit will be consumed by higher labor costs.  We believe the Company will be able to achieve its targets for the First Student business based on 1) historical margin performance 2) margin performance of smaller publicly listed competitors (National Express at close to 10% margins) 3) traction with current turn around plan. 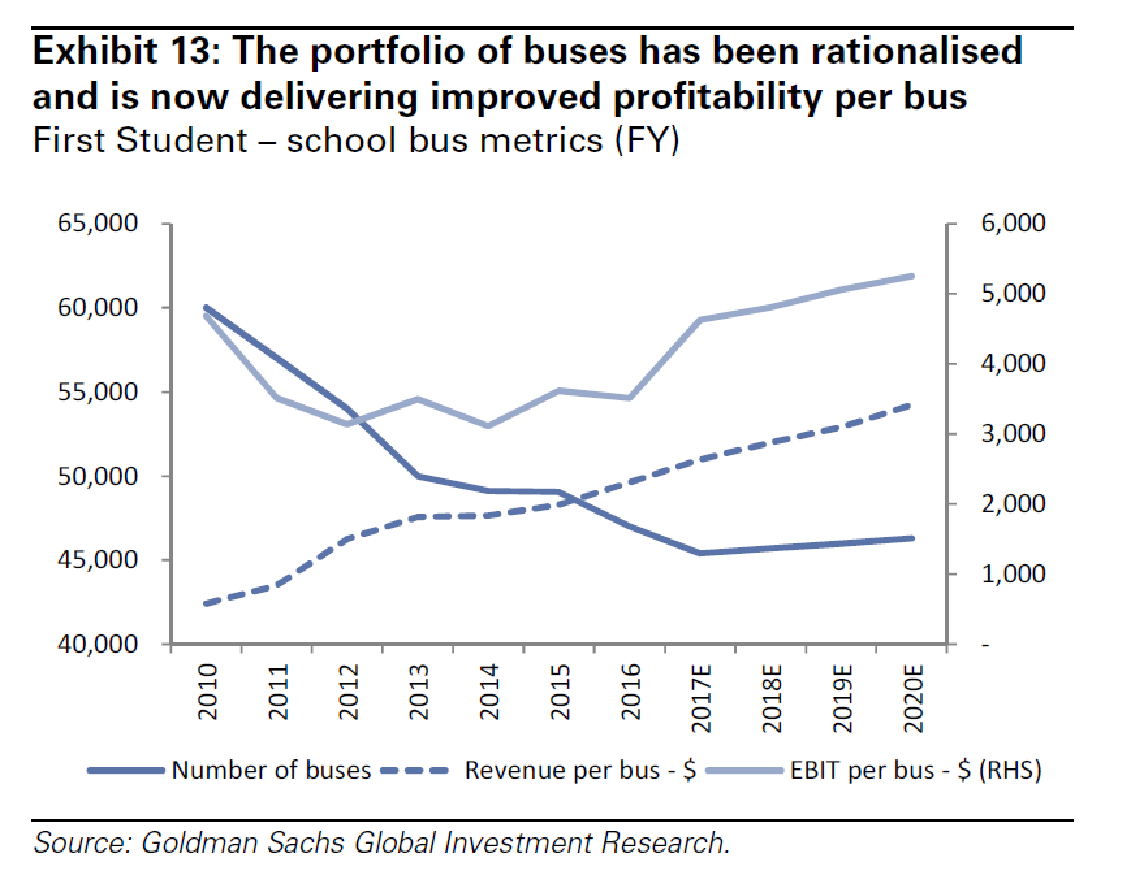 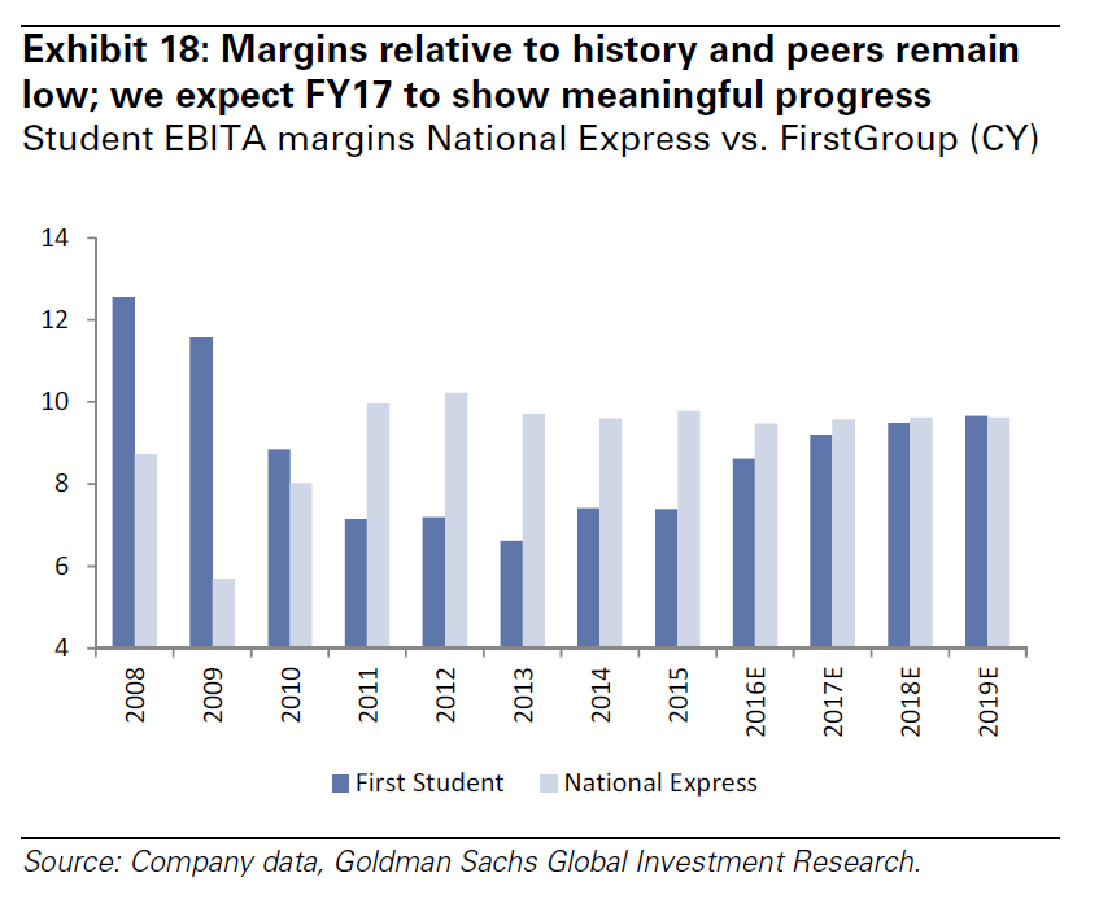 Greyhound: The modernization and turnaround program at Greyhound, focused on improved flexibility and a reduced cost base, delivered operating margin improvement and significant EBIT growth until FY13. However, weather disruption in FY14 and the significant drop in fuel prices post FY15 led to a reduction in demand for intercity coach services as these factors improved the affordability of other forms of transport, notably personal car usage and air travel. We thus assume no further margin uplift from operational initiatives at Greyhound given the lack of traction.  The current margin uplift in our forecast is the result of fuel savings rather than operational improvements.  We note though that there are a number of levers the Company could employ to drive margin uplift at Greyhound:  1) the Company is currently implementing an airline style yield management tool that could drive utilization and pricing uplift 2)  the Company could achieve break-even on its Canada operations which currently lose ~$10M/year.  Fixing the Canadian operations could translate into additional margin of 1.7% and adding 1 extra passenger per trip (average load is 35/50 seat bus) could provide another 1.7% of margin expansion. 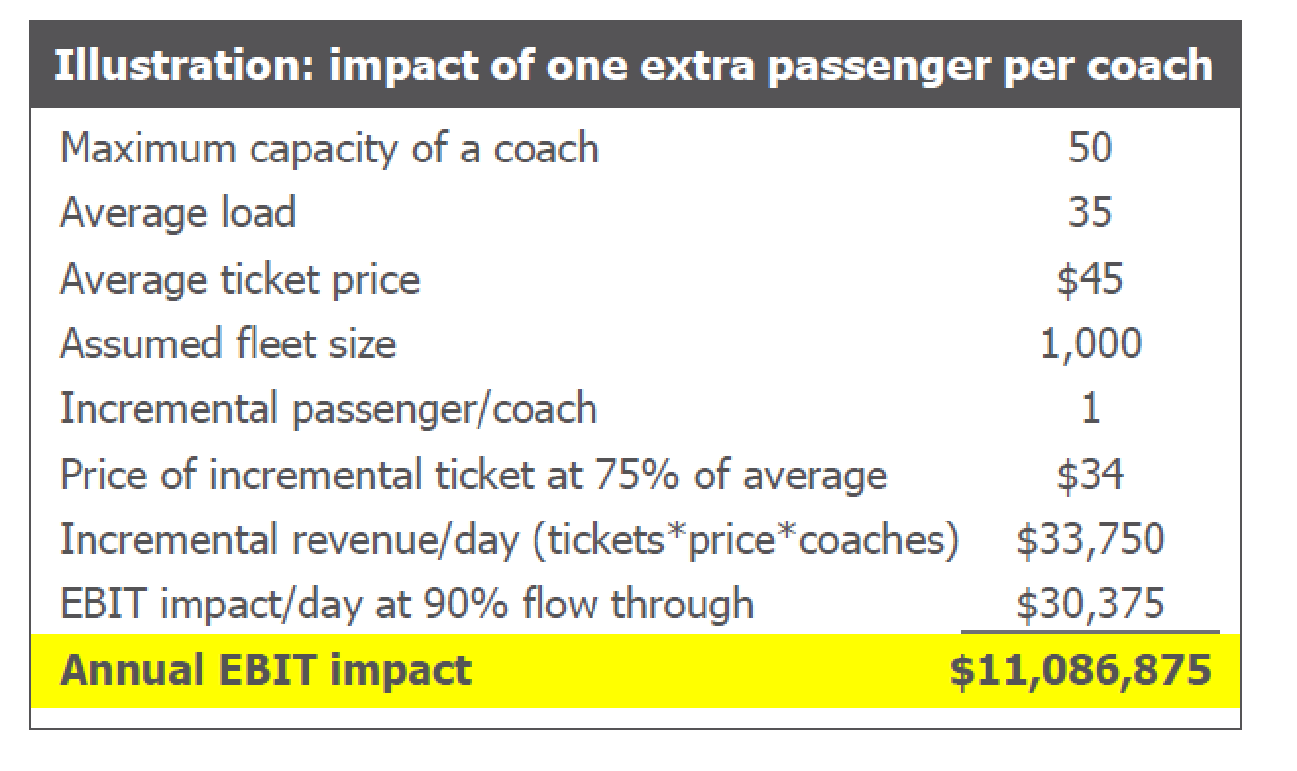 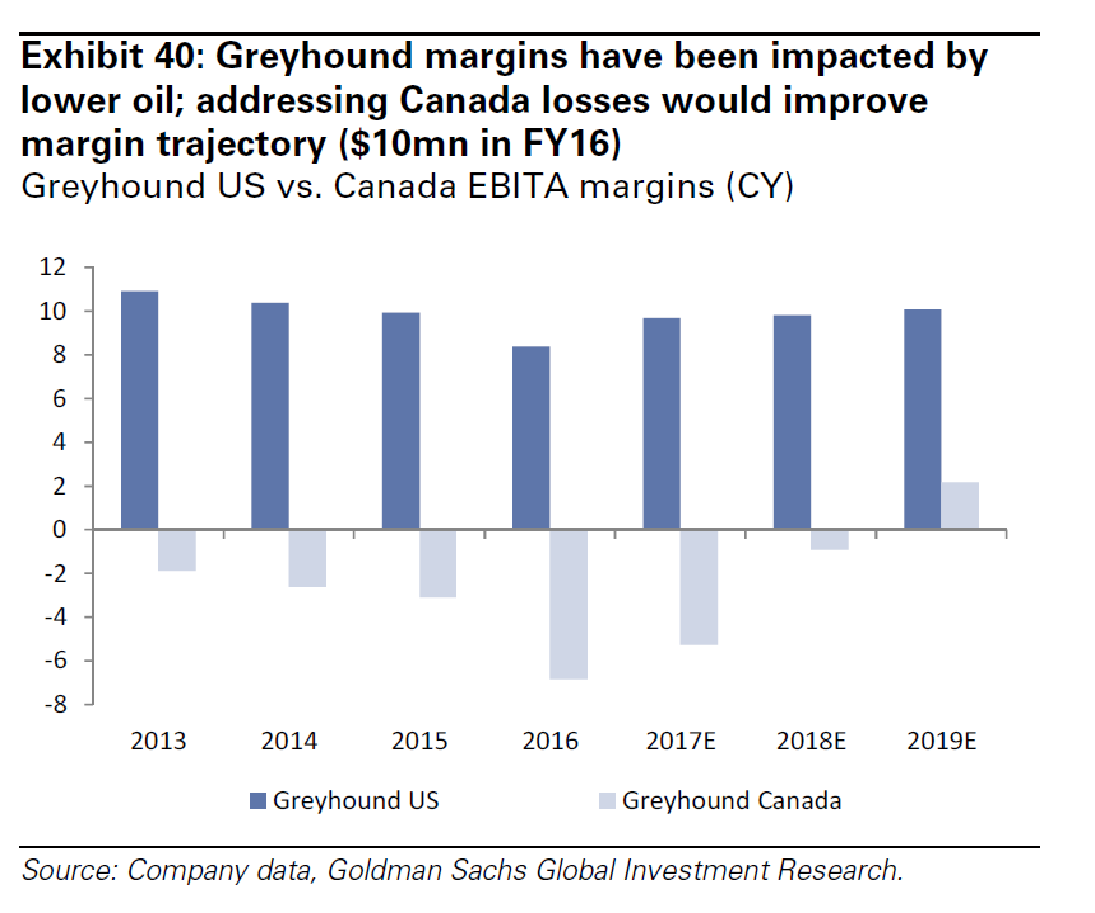 Uplift From Fuel Hedges:  In 2016 the company had a substantial portion of its at risk fuel exposure hedged at prices substantially above market.  Going forward a smaller portion of this exposure will be hedged (allowing the company to purchase at lower market prices) and the exposure that is hedged will be hedged at lower prices.  The maximum upside potential from the improvements in the Company’s hedge position is substantial per the table below:  $32M, $48M, $61M in incremental profits in the UK and $19, $36, and $43 in the U.S. ($51, $84, $104 total) for 2017, 2018 and 2019 respectively.  This could potentially translate into GBP 39M, 63M, 79M of incremental profit vs. GBP 300M of adjusted 2016 EBITA.  We note that our model/valuation assumes no uplift from fuel savings in the UK and assumes only 50% of the benefit is captured in the U.S. businesses. 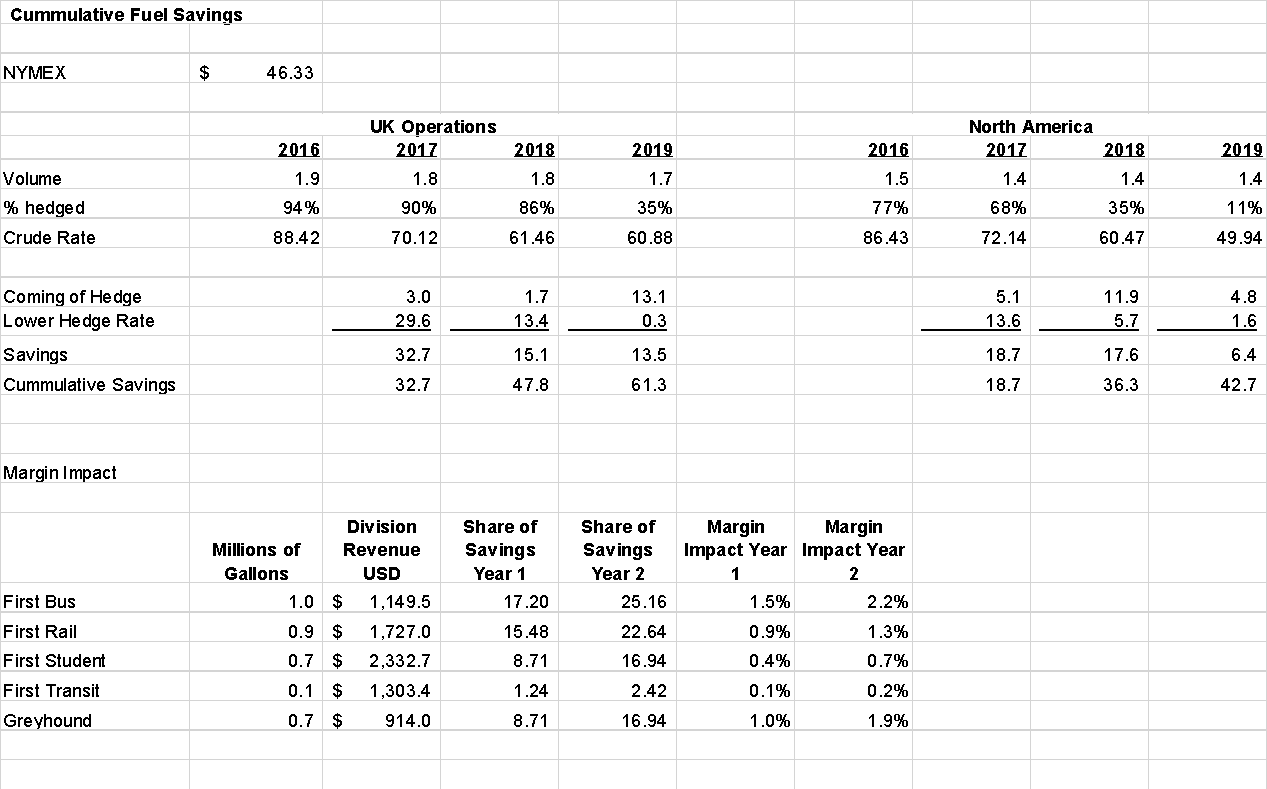 Rail Optionality:  The Company’s rail business has the majority of its revenue contracted through 2019 and beyond, however the company is positioned to compete for the 19 major franchise opportunities expected to be up for bid through 2020 (~50% of a GBP 9B market).  Based on the current announced rail franchise tender timetable, over the next 18 months we expect five franchises will come out to tender (for none of which is FirstGroup the current incumbent). FirstGroup has already been shortlisted for two (East Anglia and South Western); we expect it will also bid for West Midlands and East Midlands as it continues to work towards increasing its rail portfolio but not for the West Coast tender, owing to its recent experience with the previous tender process. The DfT is expected to decide on the East Anglia franchise sometime in June, 2016. 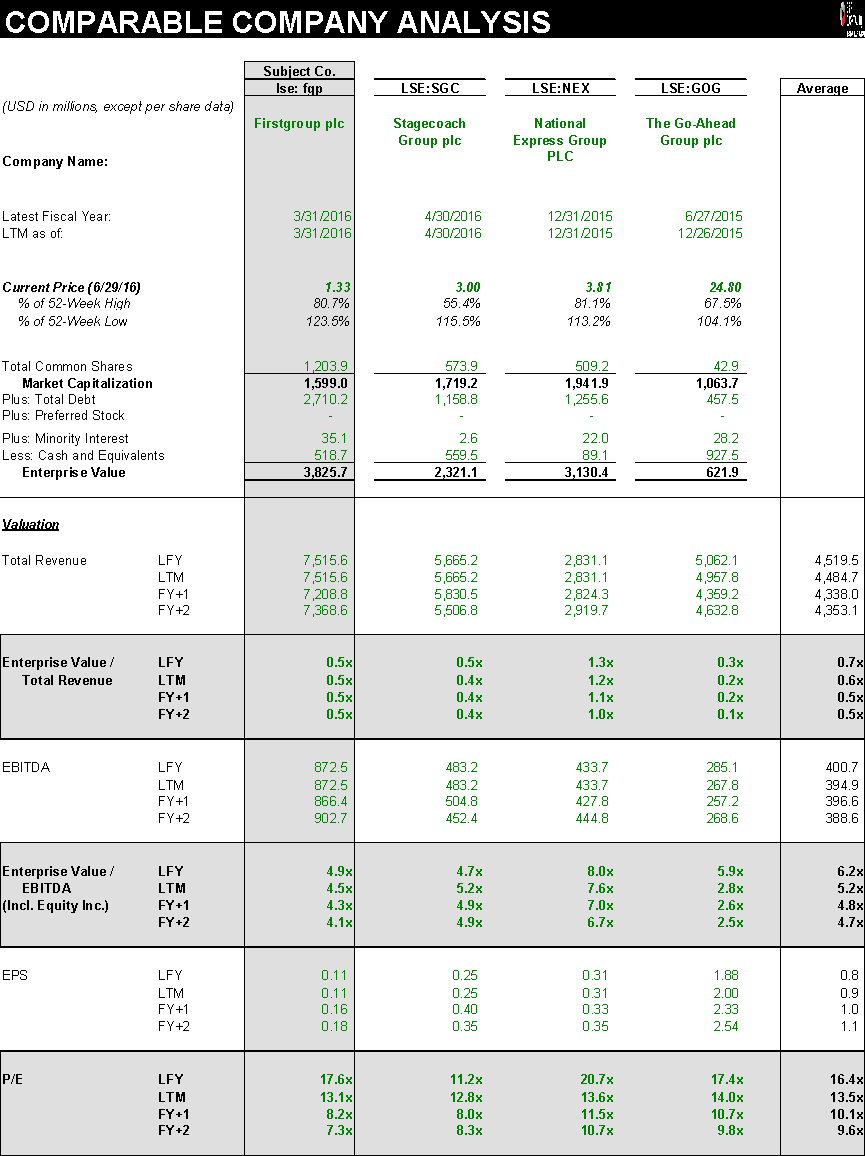 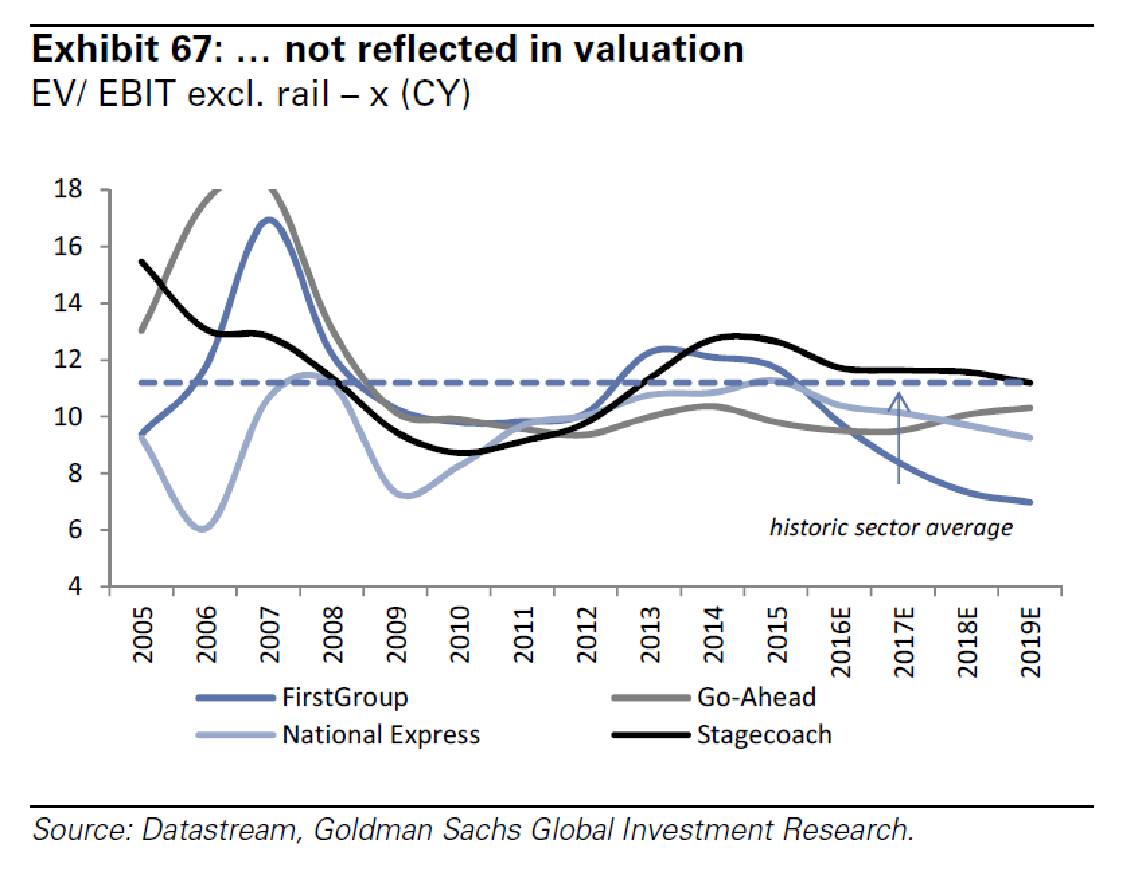 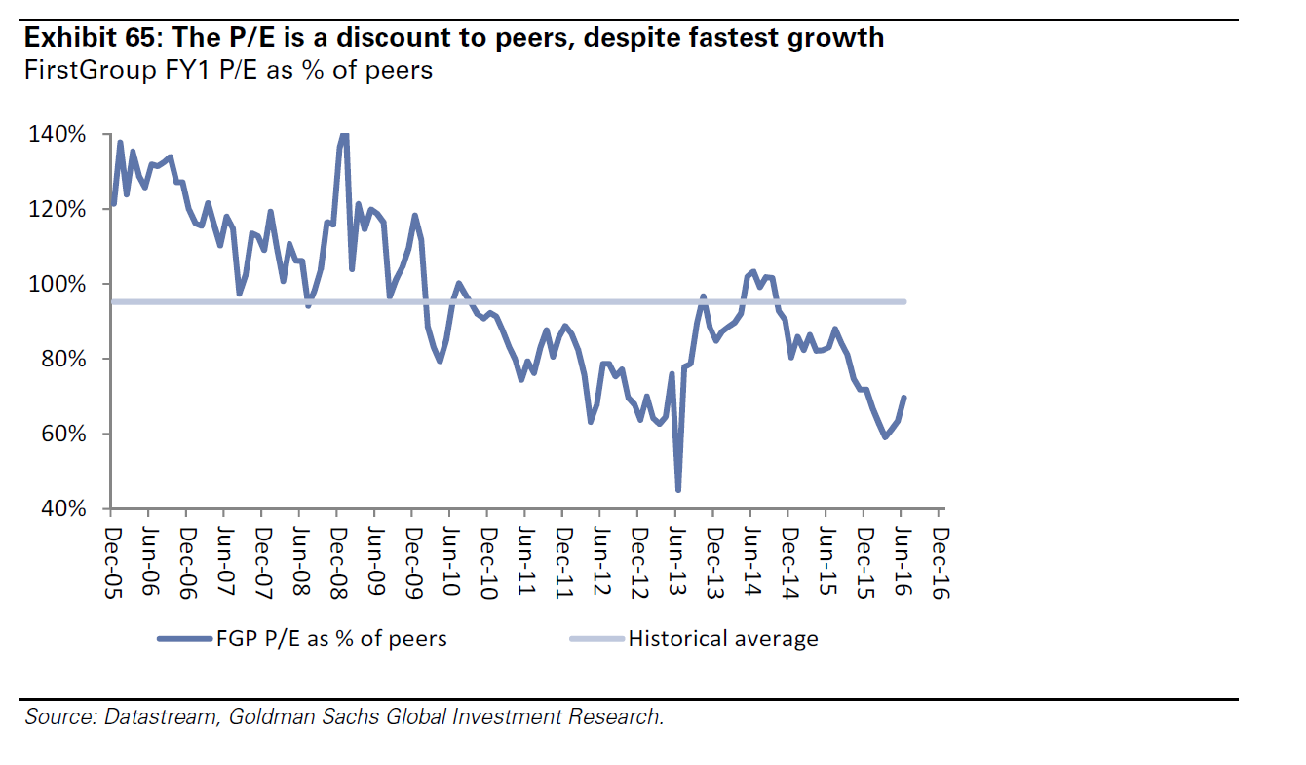 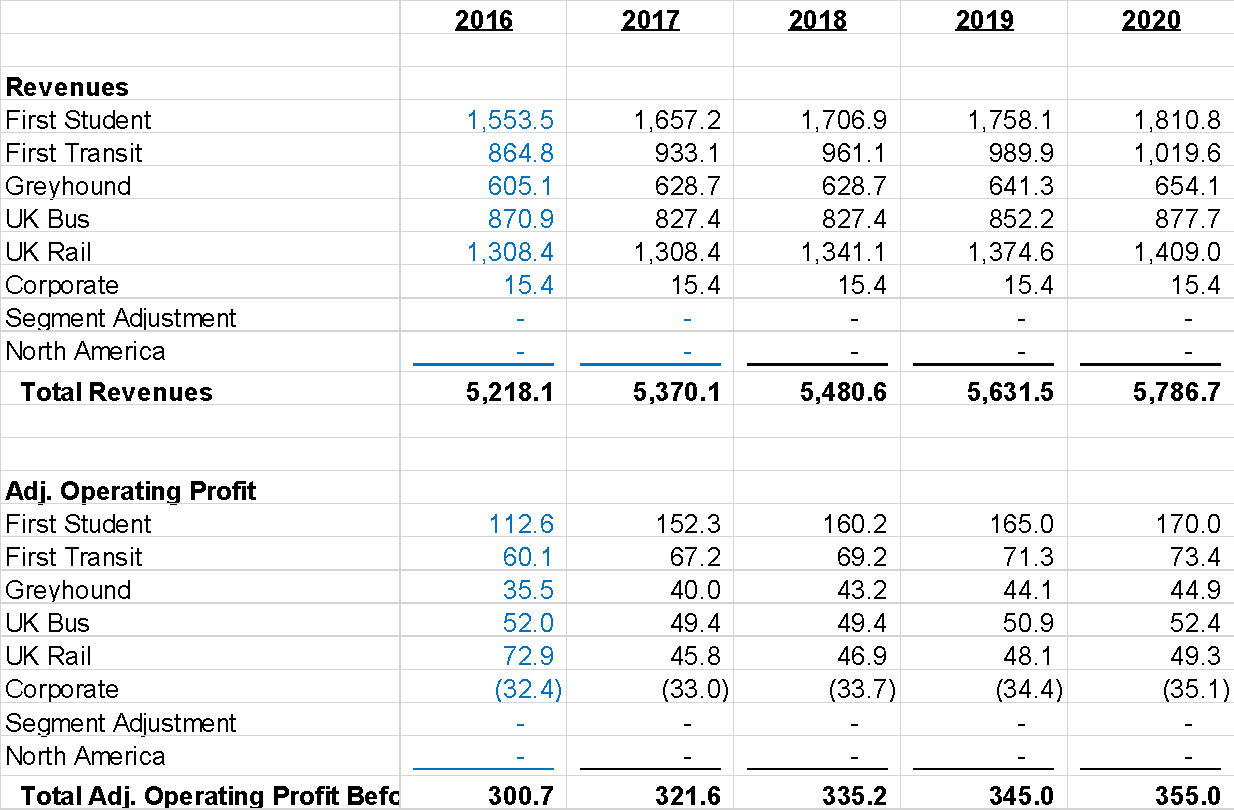 Are you sure you want to close this position FIRSTGROUP PLC?

Are you sure you want to Flag this idea FIRSTGROUP PLC for removal?