Gannett (GCI) is a struggling newspaper company that is a short because it’s share price has been elevated by an take-over approach from a private newspaper (MNG) that we think has very low likelihood of occurring.  Absent a deal, we think the stock deserve to go back to its undisturbed share price under $10 and eventually to the mid-single digits. Our thesis is:

1.       MNG / Alden Global don’t really intend to acquire Gannett, but are rather trying to force a merger as a way to exit their own investment in MNG

2.       Even if MNG / Alden were genuine in their offer, it almost inconceivable that the deal is consummated because of financing, regulatory and labor reasons

3.       Gannett, like most other newspapers, is in terrible shape from a fundamental perspective

4.       Absent the offer from MNG / Alden, Gannett should trade down to its undisturbed price and is worth nearly 50% less even using Alden’s valuation

5.       The May 16th shareholder meeting will be a catalyst for MNG / Alden to walk away and Gannett’s stock should decline accordingly

1.    MNG / Alden Global don’t really intend to acquire Gannett, but are rather trying to force a merger as a way to exit their own investment in MNG

On January 14, a private newspaper controlled by a hedge fund called Alden Global made an offer to acquire Gannett for $12 per share:

Despite its apparent seriousness, we think Alden actually does not want to acquire Gannett but is using this as a way to exit their own investment in MNG through a merger with GCI (or even an acquisition by GCI of MNG).  This was reported by the NY Post shortly after the deal announcement:

“The secretive hedge fund that owns MNG Enterprises — a controversial newspaper chain hated by journalists for slashing jobs at papers like the Denver Post and The (San Jose) Mercury News — is desperately looking to exit its investment, The Post has learned.”

It was also confirmed by GCI’s press release after meeting with MNG/Alden:

“MNG framed its proposed transaction as a merger or combination, not the acquisition proposal that MNG had previously put forth.”

At a meeting that MNG finally agreed to join on February 7, 2019, and despite having 15 representatives in attendance, including financial and legal advisors, MNG continued to evade Gannett’s basic questions concerning MNG’s unsolicited proposal.

MNG also repeatedly stated its desire for a “combination” or “merger” with Gannett, and never made specific mention of its unsolicited, all-cash proposal to acquire Gannett. While MNG later stated that it continues to pursue an acquisition of Gannett, MNG’s posture in the February 7 meeting further supported Gannett’s view that MNG is ultimately seeking to be acquired by Gannett. In fact, in the past, MNG has repeatedly approached Gannett seeking to be acquired, which Gannett has declined in all instances. We believe MNG is using its proposal as a ploy to open discussions for such a transaction. Given these facts, Gannett continues to question whether MNG is in fact a buyer or a seller.

To people familiar with Alden, their previous 13D filings in Pier 1 and Fred’s don’t instill much confidence in their investing expertise.  They were lucky enough to exit with a profit on PIR, though one can imagine what would have happened if they were able to get board seats like they wanted:

In addition, one of Alden’s major investments was the reorganized equity of Payless ShoeSource, which just filed for Chapter 22 recently, effectively wiping this out investment.

Alden’s 13F shows $89 million in investments, made up mostly of GCI and FRED.  While we have read different reports that say that Alden manages over $1 billion, we wonder whether MNG is the last major asset that Alden has and whether they are desperate to exit.

2.    Even if MNG / Alden were genuine in their offer, it almost inconceivable that the deal is consummated because of financing, regulatory and labor reasons

Even if one were to assume that Alden was genuine in its desire to acquire GCI, we believe the deal is virtually impossible.  First, it would require significant debt financing, which has not been secured. Alden claims to have gotten a “highly confidential” letter from Oaktree, but GCI has claimed that the letter was essentially worthless:

Financing Risks: At the February 7 meeting, MNG confirmed it had not secured financing for a potential transaction or even reached out to potential financing sources three weeks after having made an unsolicited proposal to acquire Gannett. Furthermore, the letter that MNG recently procured from Oaktree Capital Management, L.P.’s distressed debt fund, Oaktree Strategic Credit, more than two months after MNG launched its unsolicited proposal and more than a month following this meeting, does not represent a contractual commitment for financing or a legal obligation, and is highly conditional. The letter does not indicate that Oaktree Strategic Credit itself was confident in its own ability to arrange committed financing or otherwise suggest it would even play a role in the financing, as would be customary in a letter of this kind. The letter continues to propose financing a transaction exclusively with debt. Based on MNG’s current debt levels and EBITDA, as indicated by MNG, to complete a transaction with Gannett, we believe pro forma leverage would likely exceed 4.0x, or would require synergies in the hundreds of millions of dollars, well in excess of Gannett’s own cash flow today.

Second, for those not following the Denver Post labor relations issue closely, there is perhaps no entity more hated in the land of journalists than Alden Global.  We will include a list of articles at the end of this report but most can be traced/found from here:

We think nearly all GCI employees would not come into work the day after a take-over from Alden.

Third, the under-funded pension at GCI is effectively a poison pill, so much so that even Senator Chuck Schumer wrote to the head of Alden warning him not to play games with the pension:

For these reasons, we think that the GCI offer is not genuine, and even if it was, has very little chance of being completed.

3.    Gannett, like most other newspapers, is in terrible shape from a fundamental perspective

It is our view that there are three types of newspapers in the world today:

·         National papers with actually high quality original content that people will subscribe for through a pay-wall:  the Wall Street Journal, the New York Times, the Financial Times

·         Newspapers that may not be on a national scale but have enough “civil institution” value that they can be salvaged as a trophy property for some wealthy benefactor: The Washington Post, the LA Times

·         Every other newspaper that is effectively dead

GCI has none of the first and many of the last.  Its flagship paper is the USA Today, which doesn’t really even have a home market, has literally no “news” and is largely given away for free when you stay at a budget hotel.  The rest of the papers are effectively poster children for the industry’s struggles:

For this reason, despite several relatively large acquisitions (ReachLocal for $150 million in 2016, WordStream for $130 million in 2018) to diversify away from the newspaper business, GCI’s adjusted EBITDA has gone from $360 million in 2016 to an estimated $290 million at the midpoint of its 2019 guidance.  We think the business will continue to decline.

4.    Absent the offer from MNG / Alden, Gannett should trade down to its undisturbed price and is worth nearly 50% less even using Alden’s valuation

The valuation analysis that MNG / Alden provided in its 13D filing and for support for its “purported” acquisition offer is very misleading.  By using several peers, Alden suggests that the comparable multiple for newspaper peers is 5.5x EBITDA 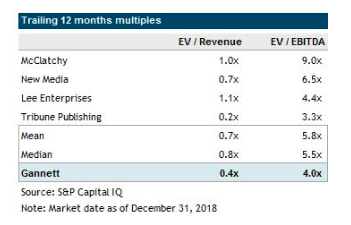 However, this analysis includes McClatchy where the enterprise value is essentially all debt, warping its EV/EBITDA multiple.  For many years, McClatchy debt traded at 60c on the dollar, suggesting that the “market” valuation was closer to 4x EBITDA. We believe McClatchy isn’t a good peer because it’s own debt is being manipulated by its major creditor:

We believe the most appropriate comparable is actually Tribune, which, according to Alden’s table above, trades at 3.3x EBITDA.  Using such a multiple, GCI is actually worth $6 per share:

B. When Tribune acquired the New York Daily News (an iconic tabloid paper with 200k subscribers), the purchase price was one dollar ($1.00) PLUS the assumption of pension, post-employment and workers compensation liabilities.  Looking above at the newspapers that Gannett owns, we believe it is appropriate to include the value of the underfunded pension in any valuation analysis.

On September 3, 2017, the Company completed the acquisition of 100% of the partnership interests in Daily News, L. P. (“DNLP”), the owner of the New York Daily News in New York City, pursuant to the Partnership Interest Purchase Agreement dated September 3, 2017, for a cash purchase price of $1 and the assumption of certain liabilities, subject to a post-closing working capital adjustment.

5.    The May 16th shareholder meeting will be a catalyst for MNG / Alden to walk away and Gannett’s stock should decline accordingly

Alden continues to talk a big game and acts as if they want to do this merger, but there are so many open questions:  would GCI be taken private and shareholders get $12 per share and MNG-GCI remains private? If so, then we will lose 10.7% on this short from the closing price on April 3.

We think that is an unlikely scenario.  We think the more likely scenario is that Alden walks away with their tail between their legs and has to sell their 7.5% stake in GCI at a share price that is somewhere between $7 and $9.  Long-term, it’s possible that Gannett faces insolvency risk. 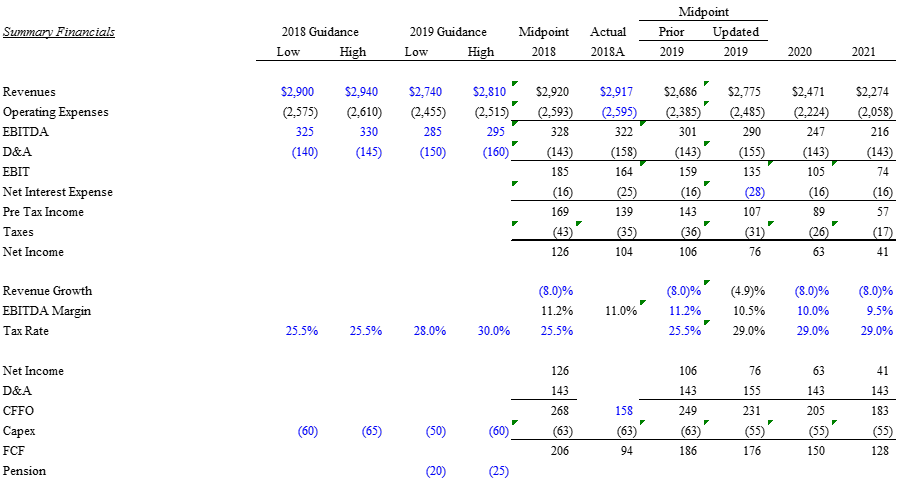 “The author of this post or his employer may have a position (long or short) in the securities of companies discussed and such position (and the author’s views) may change at any time and the author has no obligation to update this post in such event. This is not a recommendation for any person to purchase or sell any of the securities discussed.”

May shareholder meeting or MNG/Alden walking away prior

Are you sure you want to close this position GANNETT CO INC?

Are you sure you want to Flag this idea GANNETT CO INC for removal?