We are constructive on shares of IAC.   Along with Liberty Media, IAC has been one of the great shareholder value creation stories of the past few decades that have emerged from traditional media.  Barry Diller began his run with the Silver King TV station group in 1995 and through a series of exceptional acquisitions and successful spin-offs, has evolved Silver King into what ultimately became known as IAC, growing the company from $250 million of market cap to roughly $21 billion today.  During the ensuing 25 years, IAC has compounded at 14% per annum, well in excess of the S&P 500.  IAC’s outperformance has been even more pronounced over the past three, five and ten years with CAGRS of 50%, 34% and 29%, respectively. 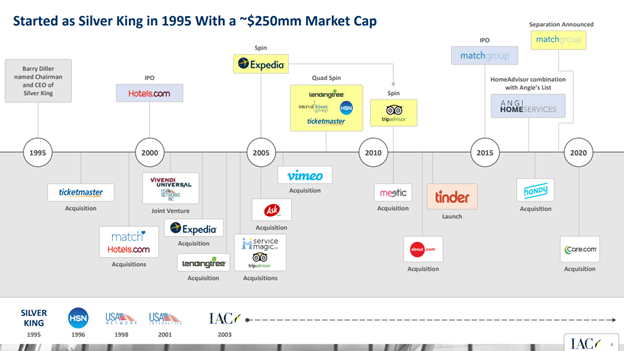 The company has an exceptional track record of growing businesses and separating assets at the “right time” and repeating that process.  The company is about to embark on its third major separation of businesses with the impending spin of Match, given investors one more opportunity to participate in this potential wealth creation process.

Following the second quarter spin-off of Match.com, investors will have a chance to own a mid- cap company with a $6.1 billion market cap and an enterprise value of $3.7 billion.

With such a modest market cap and enterprise value, if only one IAC bet turns into a major success, shareholders stand to be disproportionately rewarded.  Of course, over the past five years, that bet turned out to be MTCH.

While IAC will begin its next chapter with $2.4 billion of net cash, management is not in any hurry to spend this cash.  In fact, management has commented on valuations in the private market being highly elevated and valuations in the public market – particularly for cash flow generating businesses – being much more reasonable.

Management believes that investments in the private markets are likely to be small while the larger opportunities are likely to present themselves in the public markets – i.e. care.com.

Below, we present two sum-of-the-parts models on IAC.  The first model does not separate MTCH from IAC.  The second model is pro forma for the spin-off of MTCH at Friday’s closing price.

ANGI – The largest asset inside IAC is ANGI.  The business generated $202 million of adjusted EBITDA (15% margins) on revenue of $1.3 billion.   ANGI is a marketplace that matches buyers with providers of home services, covering 500 tasks.  The market is robust with 12% of homeowners using the service, making 27 million requests in 2019 from 250,000 service providers.  The company operates under 3 brands in the US and 5 brands in Europe.  Management believes the business can compound revenue at 20-25% per year for the foreseeable future.  EBITDA margins are expected to ultimately approach 25% as the business matures.  The total addressable market in North America is $400 billion, the European market estimated at $300 billion.  In 2020, the company is broadening the rollout of pre-priced transactions for over 150 tasks.  This should reduce the amount of friction in transacting with service providers, leading to higher conversion rates.  We value ANGI at market for 2020 and assume 15% price appreciation for our year-end 2021 price target.  We believe this business is underappreciated by the market.

Vimeo.  Vimeo is a SaaS video-tools provider.  Vimeo tools can be used to create, edit, customize, distribute, monitor and measure video.  With its tools, vimeo users can create high-impact videos in minutes.  Vimeo has 1.236 million paid subscribers and enjoyed 2019 revenues of $196 million, up from $160 million.  Management believes the business can sustain 20% revenue growth for the foreseeable future.  The business is benefitted from accelerating growth in the enterprise market where revenues grew 45% in the fourth quarter and bookings grew at an even faster rate (95%).  Vimeo has 105 million register members and its subscribers have an average lifetime of 4.5 years. Roughly ½ of its subscribers reside outside the US market.  60% of Fortune 500 companies have a vimeo account.  We value vimeo at 5x forward revenue.  The business is expected to be cash flow positive in 2021 or 2022.

Dotdash.  Dotdash is one of the largest online publishers.  According to Comscore, 1 in 3 US Internet users use at least one of Dotdash’s sites each month, with the company enjoying 96 million unique monthly users.  The business has enjoyed compound annual revenue growth of 29% over the past 3 years and management believes the business can sustain 20%+ top-line growth in the near term.  The company focuses on high impact content verticals and optimizes those websites for Google SEO.  The company’s sites have the freshest content, the fastest loading sites and the fewest adds.  The targeted verticals include: health, tech, travel, food, finance, beauty and home.  The company is competing very well in most of these verticals today.  We value Dotdash at 3.5x revenue.

Applications.  The applications segment consists of two businesses: the Mosaic Group (mobile revenue) and the Ask applications (desktop).  During 2019, mobile revenue was $199 million while desktop was $320 million.  Overall revenue declined from $582 to $520 million.  Management is hopeful this segment will infect at some point in the next year or so, as mobile revenue contributions begin to more than offset declines from desktop.

Care.com.  IAC recently announced the acquisition of Care.com, a two-side marketplace matching caregivers to those seeking such services.  The company paid $500 million for a business with $200 million of revenue and $20 million of EBITDA.  We believe this acquisition has attractive long-term potential and management likens the opportunity here to that of ANGI.

Are you sure you want to close this position IAC?

Are you sure you want to Flag this idea IAC for removal?