Internap is a catalyst rich, high risk, small cap data infrastructure company which recently hired a new top tier telecom CEO to turn the business around, streamline operations and potentially sell parts of the company or the entire business.  The new CEO is highly incentivized to drive shareholder value, given his 1.5 million share restricted stock grant, given at the time of his hiring is largely dependent on the stock being ~150% higher than when he started.

Internap was written up previously by frankie3 in June, 2015.  At the time, the company was expected to generate $358 million of revenue and $101 million of EBITDA in 2016.  The company, will announce numbers on March 9th (but reiterated their guidance last week), and will actually end 2016 with $298 million of Revenue, and ~$82 million of EBITDA - a ‘miss’ of 17% and 18% respectively.  A lot has transpired since the idea was originally written up - with the stock trading then at $8.93, and now currently trading at $2.30.

Internap is a data infrastructure company, that combines a colocation business (company controlled and partner (effectively a reseller), an IP connectivity business as well as a Cloud and Managed Hosting business.  Over the past several years, the company has refocused the business on company controlled colocation, as well as hosting and cloud, while deemphasizing IP connectivity and partner controlled colocation.  THis has had the effect of driving up margins substantially, while also going through a large capex cycle in 2014 and 2015.  While margins have been the bright spot, the company has struggled to execute in driving sales and top line growth.  2015 was largely a disappointment, and led the company to announce it was reviewing strategic alternatives for the business.  The process dragged on, and during the Q4 2015 call in February, 2016, announced what was largely expected, the strategic review did not end with a transaction.  The company commented at the time that while they received a wide range of financial and strategic parties to ascertain interest in a transaction, none of these turned into anything ‘due to a variety of factors, including the inability to obtain financing and volatility of the credit markets’.  The Board determined that it would cut costs, reorganize the business into two ‘integrated’ business units - Data Center and Network Services, and Cloud and Hosting Services with the view that this could open up additional strategic options in the future.

2016 didn’t fare much better for the company, with the company reducing guidance 3x during the year.  A combination of large churn events in its data center business from companies that were acquired by ‘large social media companies’ spike churn, and caused a contraction in the top line.  On top of that, the continued decline in IP pricing and contract renewals hurt the IP business, while partner colocation continued to attrit.  In September, the company announced another leadership change - the prior CEO Michael Ruffolo was a board member who stepped into the seat in 2015, was removed and replaced by Peter Aquino - a seasoned, experienced telecom industry veteran.  We have been invested with Aquino in the past when he was the CEO of RCN (cable overbuilder) - which he brought out of bankruptcy in 2004 and sold to Abry Partners for $1.2 bn in 2010.  He then moved to a more troubled asset, Primus Telecom, where he struggled to turn the business around, but ended up selling it in pieces, the largest of which was to York Capital. 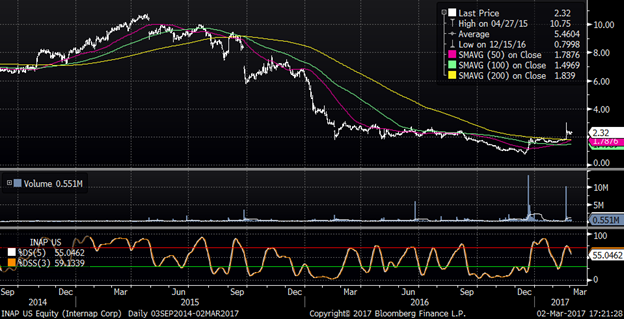 This is where the story becomes interesting.  On his first earnings call - Q3, 2016 in November, Aquino explained his vision for the business, effectively laying out multiple catalysts that should transpire over the course of the year.

The company announced in December preliminary 2017 guidance, and then reiterated after the equity raise in February.  While top line is expected to contract 6%, EBITDA margins are expected to expand by 300 bps, and EBITDA $s are expected to grow 5%.  The company during the Q3 call, commented that the large churn events experienced in late 2015 and 2016 they did not forsee again happening. Churn should return to more normalized levels in 2017, which are +-3%  on the cloud/hosting segment and ~1.5% in the DCNS business.   Obviously, anything is possible, but there is nothing coming out of the current pipeline.   While we don’t have any color around the guidance, we know that it includes the $5-$10 mm of cost cuts already announced, however the company did comment that it was reinvesting into the salesforce, so not all of the gross savings would be realized.

In order to get to a 6% decline in the topline, and barring additional large churn events (~40% of churn in 2016 related to customers being acquired), one needs to make aggressive assumptions on the declines in the partner colo business to get to their guidance - which would also explain much of the expected margin expansion.  I have forecasted in excess of 30% declines in the partner colocation business, with continued double digit declines in IP connectivity, offset by tepid growth in cloud and company controlled colo.  Margins in company controlled colo, as well as partner colo should be buoyed by continued lease-up and scale benefits, combined with the exit of unprofitable data centers.

While I have not forecasted any additional savings, I would expect the company will identify additional areas to cut costs over the course of the year.  Continued mix shift to the growing cloud and company controlled colo business, and away from the partner colo and IP business will also help margins. 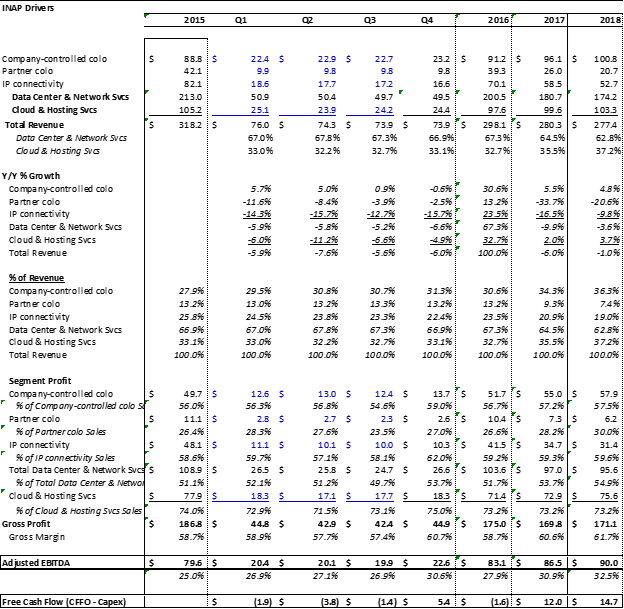 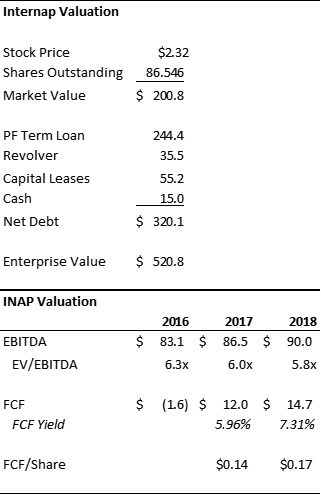 Given the disparate business units, we look at valuation on a Sum of the Parts Direct basis, fully allocating Direct Support as well as the much larger SG&A number across all business units.  In an M&A scenario,  this is overly punitive given that most of the overhead is likely redundant and given the fact that INAP is  a subscale infrastructure asset. 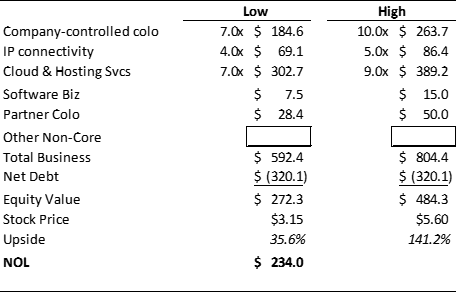 Are you sure you want to close this position INTERNAP CORP?

Are you sure you want to Flag this idea INTERNAP CORP for removal?