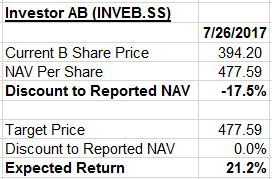 Listed Core Investments comprises large stakes in publicly traded companies in which Investor is the lead owner, controlling a plurality of the vote and the Board.  Almost all of Investor’s 11 Listed Core Investments are Swedish large caps in which the Company has retained a stake for well over a decade; in some cases, many decades.  These are all profitable, cash flowing businesses, mostly in the industrial vertical.  Churn in the portfolio is extremely low.  Valuation is straightforward and based upon publicly traded market values.  This segment currently comprises 72% of total assets.

Patricia Industries contains Investor’s numerous privately held companies.  Nearly 60% of this segment’s NAV is attributed to Mölnlycke, a world-class medical device manufacturer. Valuation is based upon publicly traded comparable company earnings multiples and is discussed in more detail below.  This segment currently comprises 24% of total assets.

EQT is a leading European-focused private equity firm founded in 1994 which has raised 35 billion EUR from investors and put 22 billion EUR to work in a global portfolio of 170 companies across 24 funds.  EQT collectively owns companies employing 110,000 people with annual sales of $22B USD. Investor was an original investor in EQT and owns a 19% of the general partnership (GP).  Investor also is the largest individual investor in most of EQT’s funds.  Valuation is strictly based on reported values of Investor’s limited partnership stake in each of EQT’s funds and does not include the value of EQT’s stake in the GP.  We value Investor’s stake in EQT’s GP at a multiple of average annual free cash flow of 10x; we believe it is worth 20 billion SEK (26 SEK per share) which is 40% higher than book value of 14 billion SEK (18 SEK per share).  This segment currently comprises 4% of total assets.

Swedish investment companies are effectively closed end funds which predominately invest in publicly traded Nordic equities.  Most of the major companies in this industry were set up by wealthy Swedes to invest their family’s riches; they set up these investment vehicles in order to take advantage of local tax rules which allow for capital gains and dividends from investments to be tax exempt.  Investor AB is no different as it was set up by the Wallenberg family a century ago to invest the family’s banking fortune.

Despite this sector re-rating, Investor’s discount to NAV is still stubbornly high.  It is the highest amongst its peer set which collectively trade at a PREMIUM to NAV.  Regardless, in the recent past Investor traded at a similar discount to NAV as its peers.  The entire group has traded at an average discount of 6% over the past 3 years but today trades at an average PREMIUM of 5.1%.  As detailed below, we see no salient reason why Investor’s NAV discount should continue to be in the high teens when the peer set now trades at a premium to NAV.

Consider the chart below which details some important metrics for Investor as well as its peer set.  As you can see, Investor’s discount to NAV is the highest of the group despite having a similar portion of its NAV that is publicly traded, low leverage, minimal management costs and an above average dividend yield.  Again, we see no good reason why Investor’s shares will continue to trade at discount to NAV of 18% when its peers trade above par.  We expect this discrepancy to narrow considerably as investors consider the major reporting change Investor made recently (discussed in detail below).

You may have noticed that we did not include Kinnevik (KINVB.SS) in our comp table above.  Kinnevik is a reasonable comp to Investor except for a very large difference in business models.  While a large portion of Kinnevik’s NAV is publicly traded, much of it is tied up in zero profitability dotcom companies including Zalando (ZAL.GY) which trades on a sales multiple.  Additionally, Kinnevik’s major private holding, Global Fashion Group, is consistently unprofitable and continually requires cash infusions from the parent in order to sustain itself.  This is simply not the case for Investor’s public and private holdings, all of which are growing and profitable.  As such, we have excluded it from our comp table above.

This investment opportunity exists because of an NAV reporting decision management made many years ago.  Historically, Investor recorded the value of its stake in its privately-owned businesses within Patricia Industries at book value when reporting NAV.  But this all began to change on March 9, 2017 when Investor announced its intention to ‘start providing supplementary information about unlisted holdings within Patricia Industries.’ (https://vp053.alertir.com/afw/files/press/investor/201703091183-1.pdf).  Since 2007, when Investor began to build Patricia Industries, the Company reported the values of its holdings at book value cost and never provided updated market valuations.  This was always in stark contrast to every one of its investment company peers who all use EBIT or EBITDA comparable public company multiples to value their private holdings.  At first, this was not a big problem for Investor as book values approximated market values but over the years, as the value of certain holdings within Patricia Industries grew tremendously, the gulf between reported book values and true market value became untenably large.

This all changed when Investor reported Q117 results as the Company finally began to provide investors with market-based estimates of their privately held holdings.  This new approach now highlights the large hidden value difference between Investor’s old Reported NAV and new Adjusted NAV.  Their new reporting structure as of 3/31/17 is shown below: 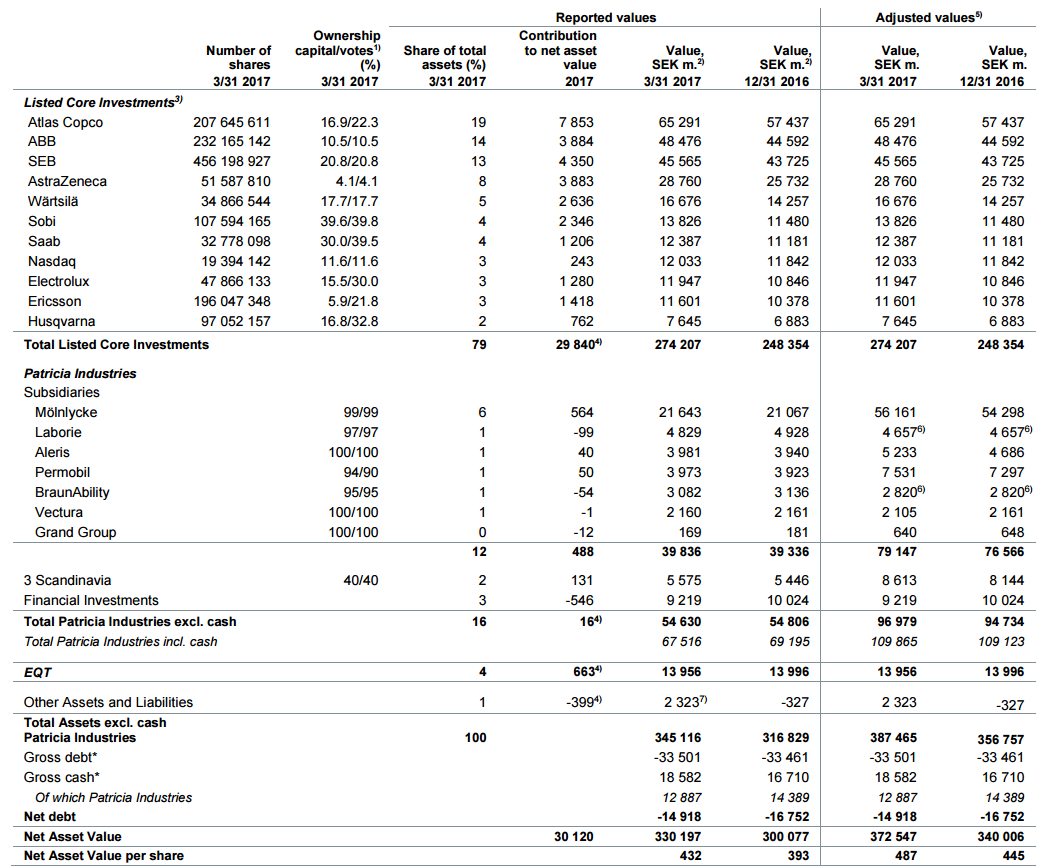 The biggest change in reported NAV originated from marking up the value of Mölnlycke.  Mölnlycke is a medical devices company with $1.7B USD in annual sales, 30% EBITDA margins, and a new adjusted valuation of 56 billion SEK ($6.4B USD).  The value of Molnlycke was marked up so much by Investor because it was purchased in two tranches from private equity owners in 2007 and 2010 for a total 2.4B EUR (23B SEK) and during Investor’s ownership EBITDA has more than doubled.  Continuing to value it at book value when profitability had increased so dramatically distorted Investor’s true NAV.

Here is a summary of Patricia Industries’ companies:

The Discount Has Already Begun to Close

The graph below represents the price of the stub we have effectively invested in (the trade’s construction is in the next section).  It is a representation of the inverse of the discount to NAV.  As it increases in value, the discount to NAV narrows.  As you can see, the stub has appreciated considerably since the announcement made on March 9th which is when the graph begins.  We believe this will continue as investors continue to digest the company’s new reporting structure.

Additionally, management held the company’s first Investor Day since 2010 on March 30th 2017 in order to highlight Investor’s business qualities.  We believe this is the first of many steps management is likely to take over the next year to get its story out in front of investors around the globe.  This simply was not necessary when Investor, like its peers, all traded at similar discounts to NAV.  But as Investor’s peers saw their stocks rise considerably and their discounts to NAV shrink, management could no longer remain on the sidelines silent while their company’s valuation languished.

Another factor that we believe is driving management’s reporting change is compensation.  Specifically, half of CEO Johan Forsell’s compensation is paid in stock and other long-term benefits.  We expect management to continue to highlight the large difference between the share price and NAV as they are highly incented to get the stock price up over the medium term. 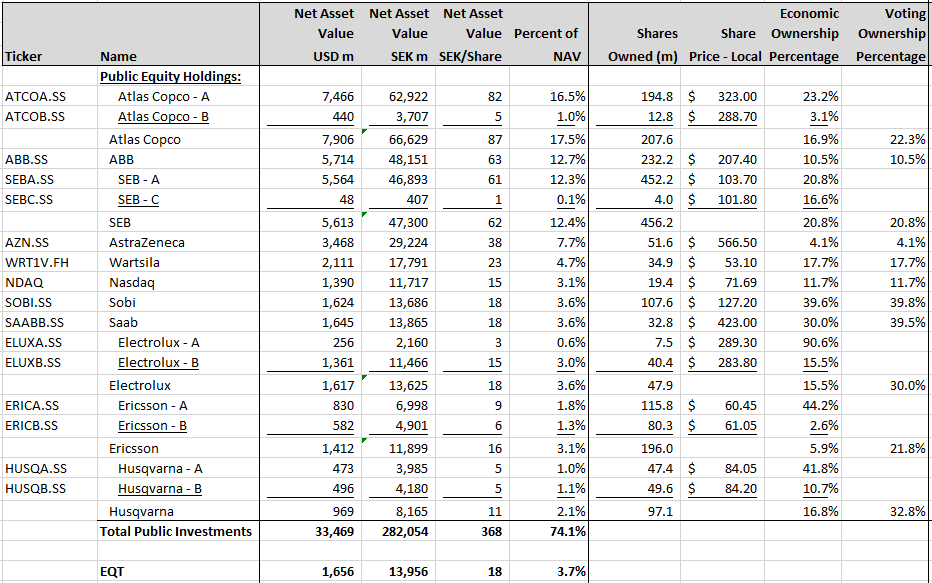 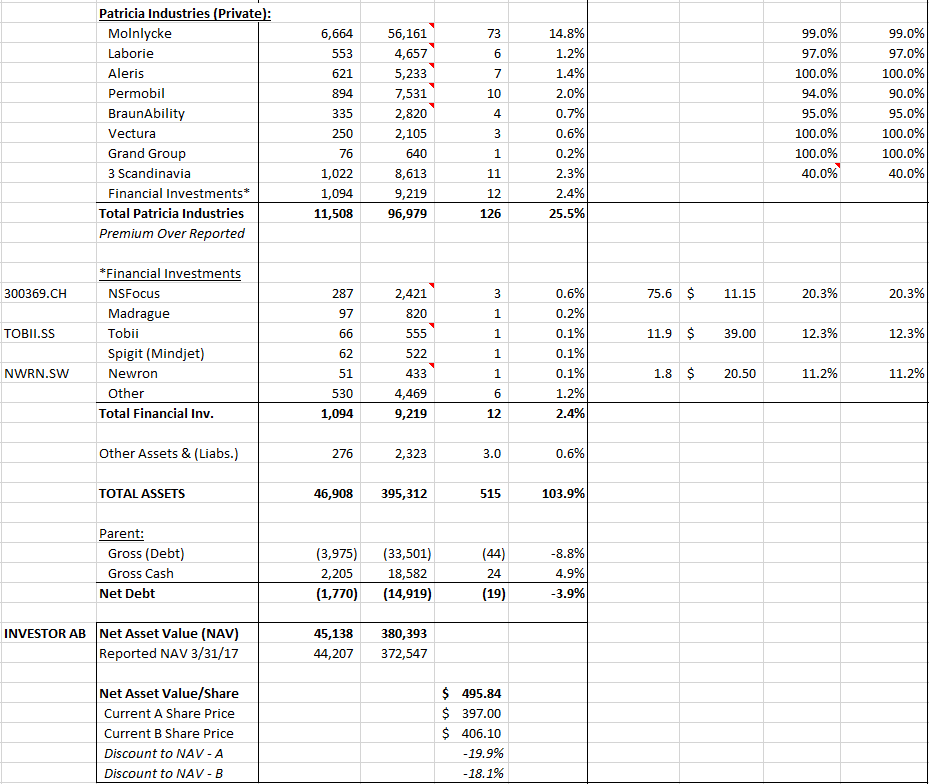 Investor owns controlling stakes in 11 different publicly held companies, some of which have two share classes.  For simplicity’s sake, our trade only requires that we short the more liquid of the two share classes, if appropriate.  All of the stocks involved are very liquid with average daily volumes in USD in the tens of millions, low borrow costs, and minimal short interests (except SOBI.SS).  The ratios are calculable based on the holdings detailed in the table above.

The main driver behind potential payoffs of our investment in this structured trade is discount to NAV.  For all of the reasons detailed above, we believe Investor’s current discount to NAV is unfairly high and should be zero.  We believe that the discount to NAV will narrow over the next year as shareholders begin to better understand the change in NAV reporting coupled with the realization that Investor is best-in-class and that its unusually large discount to NAV is unwarranted.

If Investor’s stock were to trade to a zero discount to NAV then the stock price will simply be NAV, or $478 per share.  At today’s share price this represents a 21.2% return, with no direct market exposure.

DISCLAIMER: The author is long INVEB SS and short ATCOA SS, ABB SS, SEBA SS, AZN SS, WRT1V FH, NDAQ, SOBI SS, SAABB SS, ELUXB SS, ERICB SS, and HUSQB SS.  This is not a recommendation to buy or sell any investment.  Additionally, this document should not be relied upon to make an investment decision as the numbers and figures presented are solely the author’s estimates.  Investors should contact the company directly and read company public filings to form their own opinions and make their own investment decisions.  The author may transact in the securities listed above without notice.

Are you sure you want to close this position INVESTOR AB?

Are you sure you want to Flag this idea INVESTOR AB for removal?