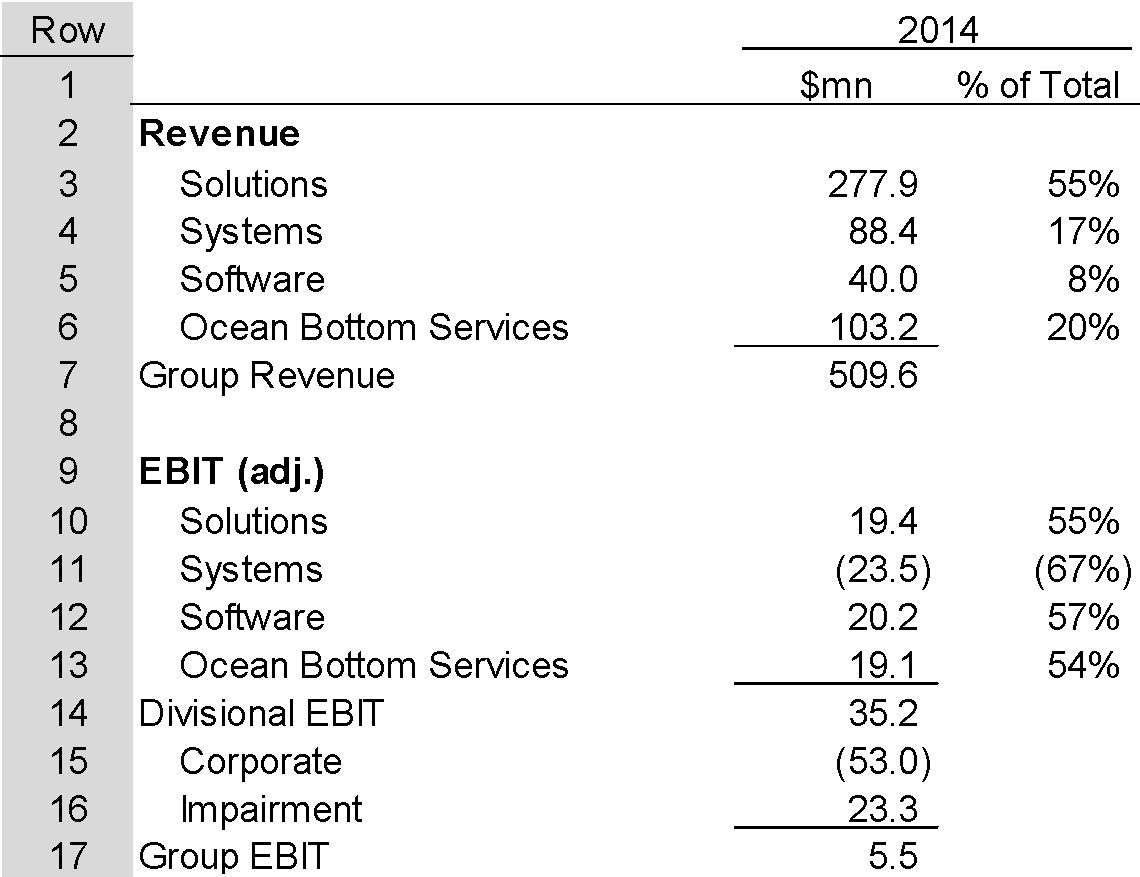 Leverage through the 2nd lien bonds is not very high and repayment at maturity is very likely. The shares have also become so cheap that one can view them as a 3-year call option (until the maturity of the bonds) on a recovery in seismic activity / the oil price. The company is not facing imminent liquidity issues or covenant pressure.

Even using very conservative assumptions, allocating very low single digit multiples to LTM financial figures onto industry leading divisions such as Software and Systems, the 2L bonds are well covered. At today’s share price, ION’s equity also offers a compelling risk / reward investment. If ION manages to ride out the cycle, making 3-4x the capital invested is quite feasible, against some low chance of getting wiped out. 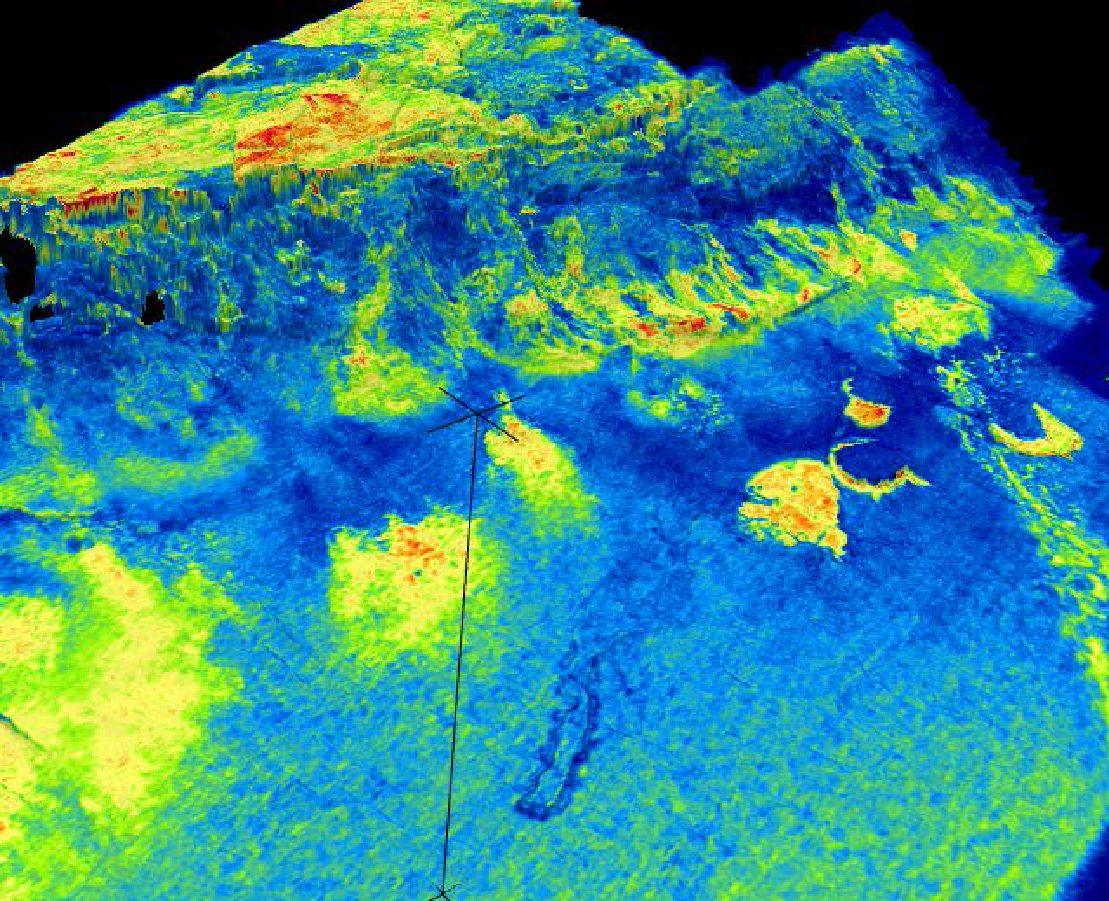 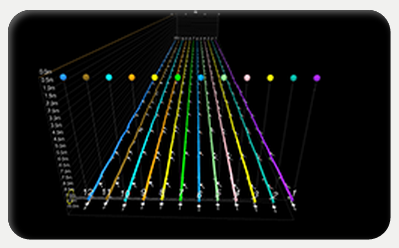 Below is the adjusted EBITDA and the adjustments required to arrive at unlevered free cash flow of ION, which excludes acquisition expenditure, working capital movements, and cash interest payments. Over the past 7 years, ION managed to generate ~$40mn in unlevered cash flow per year. 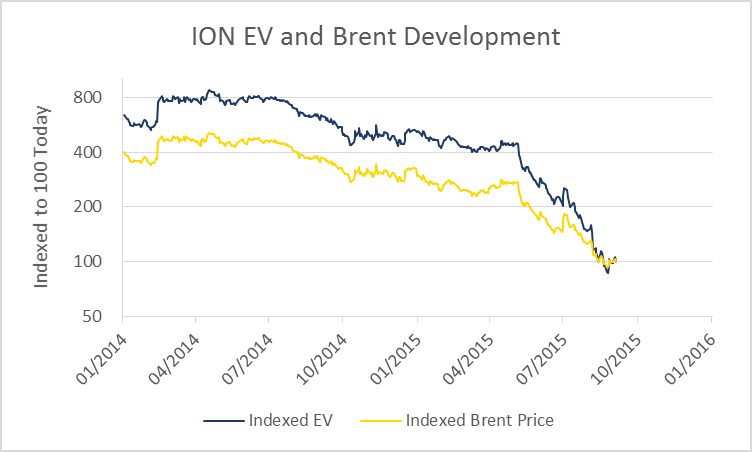 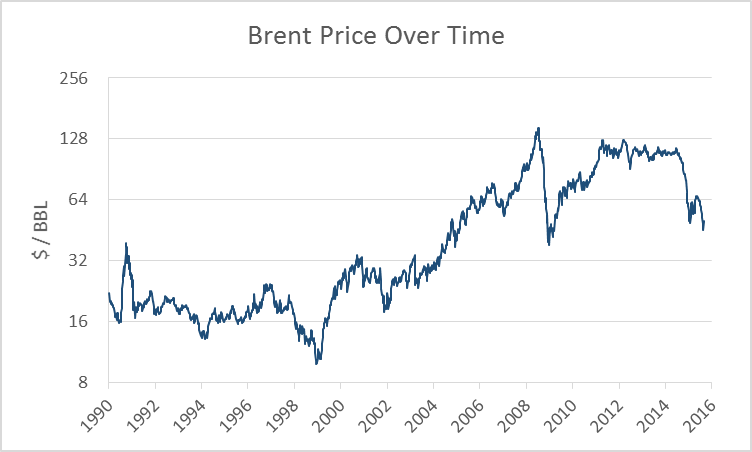 Recent oil field discoveries tend to have higher decline rates than older fields. This is widely attributed to the fact that the highest quality and lowest cost fields have already been tapped and newer fields are all incrementally worse. Higher decline rates mean that E&P companies need to step up the rate at which new oil fields are found and exploited, which helps exploration companies like ION. 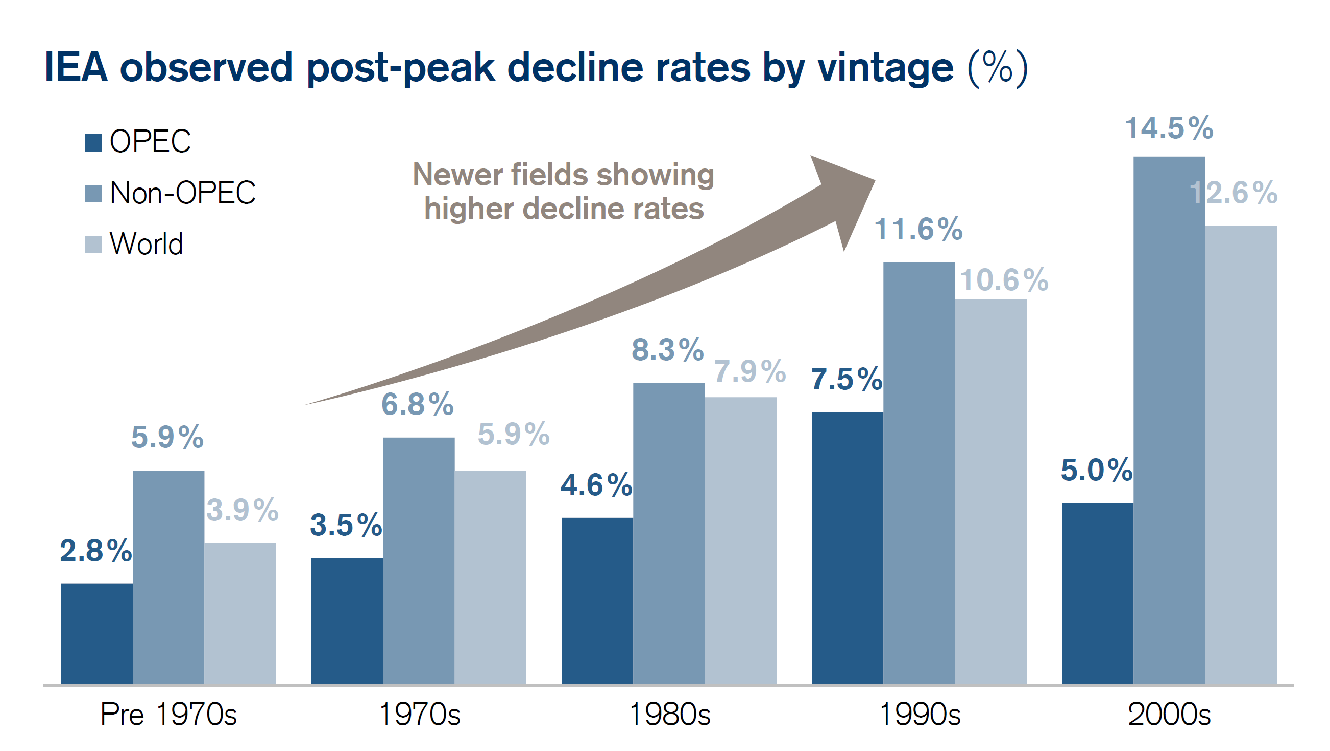 3a. Oil Field Services: Positioning of the Seismic Industry

Seismic services are typically engaged in the very beginning of the oil production cycle. Exploration spending is prone to cutbacks by when oil prices fall, although oil majors keep looking for oil with little regard to prevailing oil price levels. 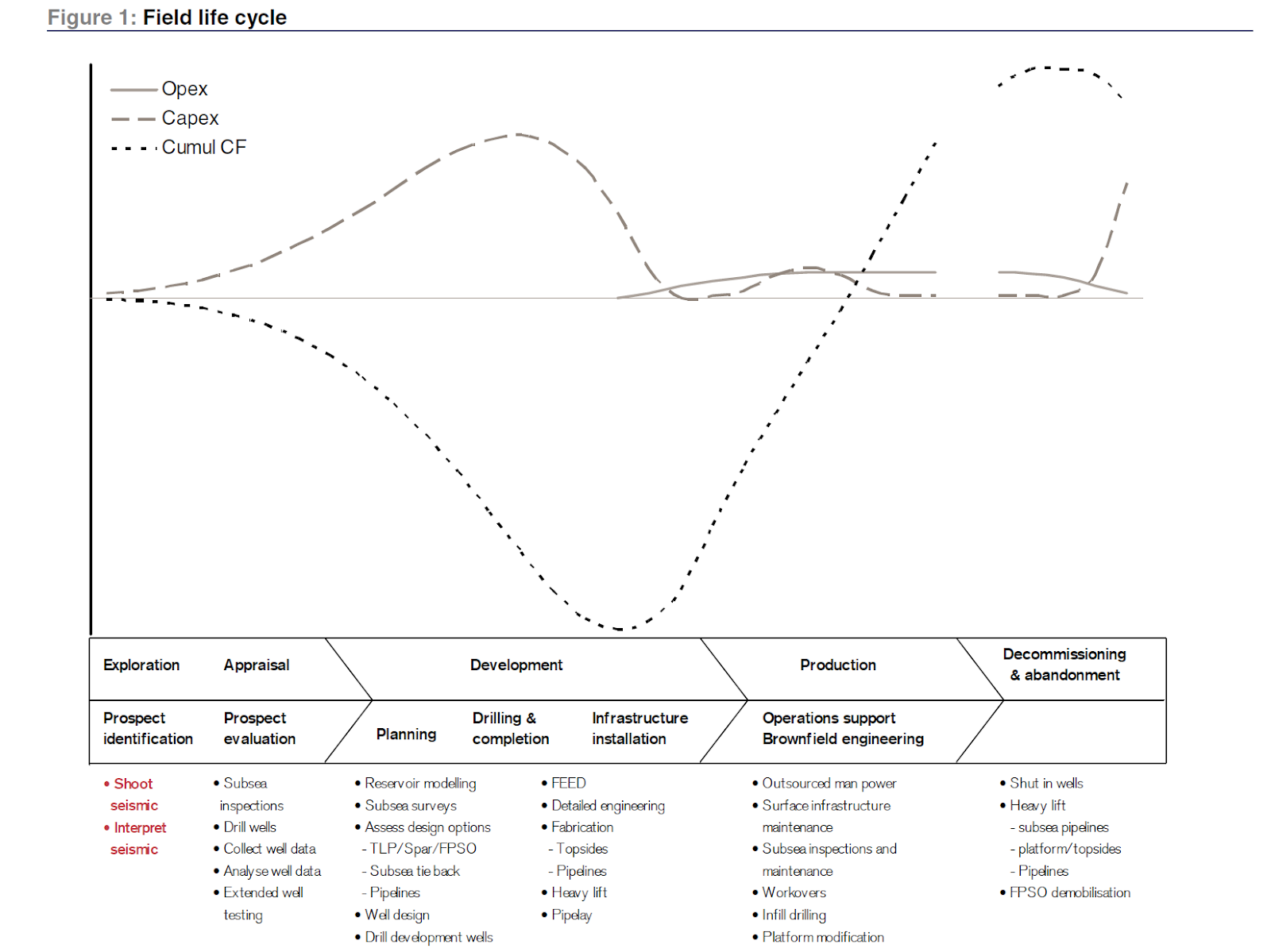 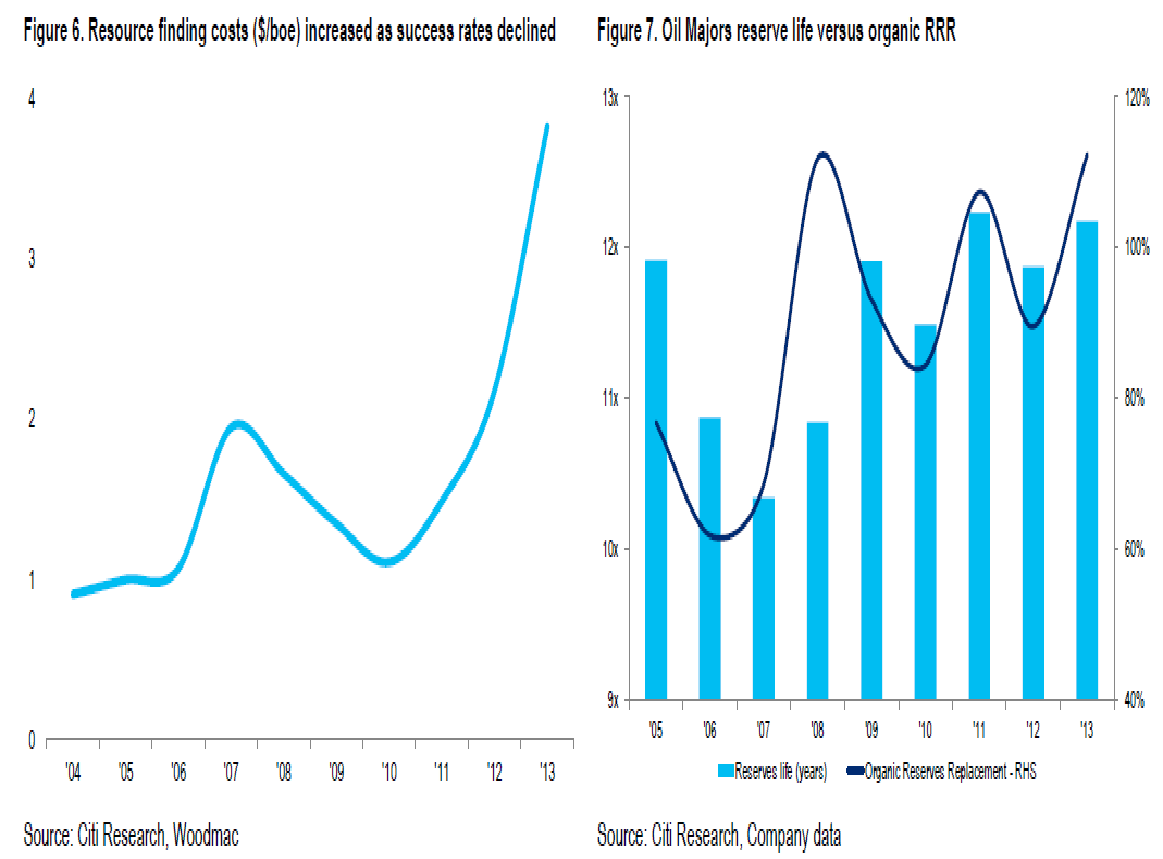 Over time, seismic surveys have become an increasingly important part of exploration programs. 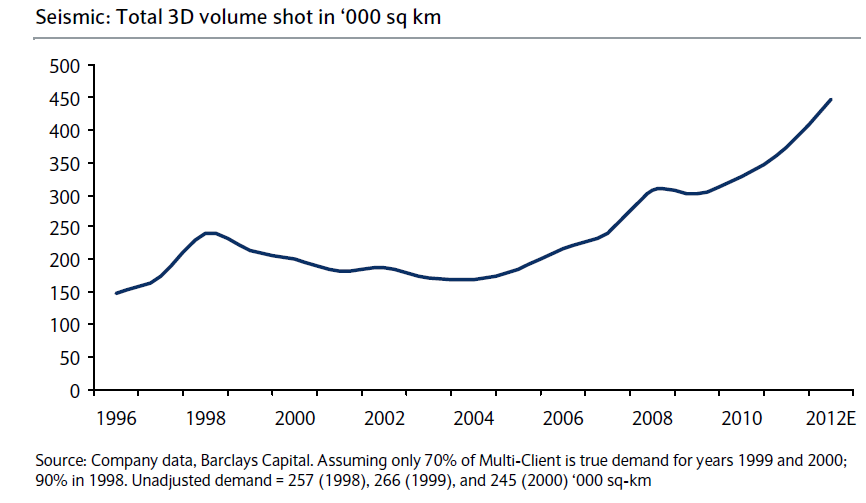 Despite growth in exploration spending, oil majors have barely managed to maintain their oil reserve levels. As reserves decline, oil companies will have to keep looking for new reserves.

The seismic industry is relatively concentrated with three big integrated players PGS, WesternGeco (part of Schlumberger), and CGG as well as a range of smaller companies that occupy different niches along the supply chain.

The marine seismic exploration industry in particular is highly concentrated between the top 3 players controlling ~70% of the global streamer capacity. However, because barriers to entry are low, competition is fierce as recent entrants created to overcapacity in the market, which is hurting sales in ION’s Systems segment right now. 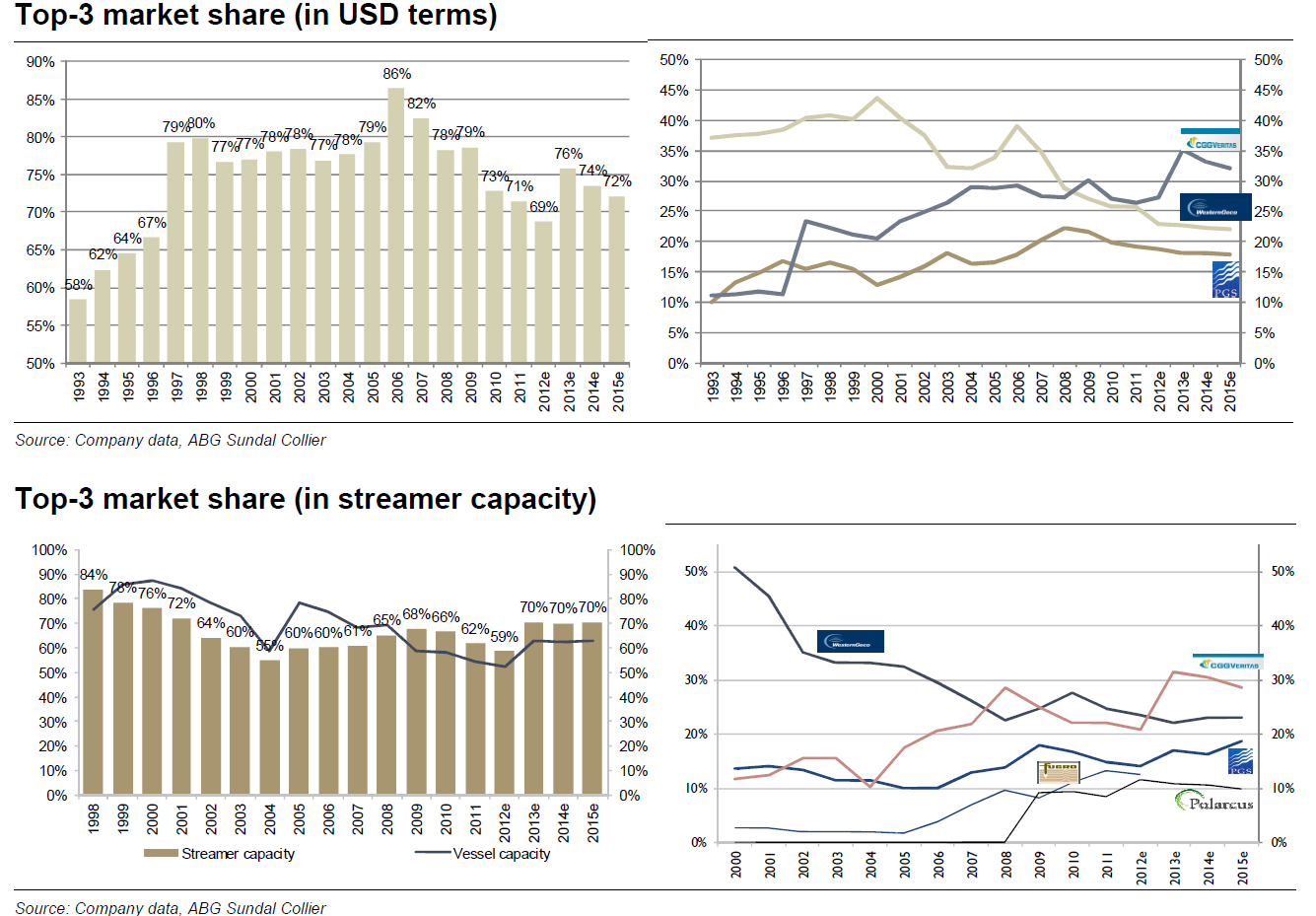 ION is the undisputed leader in the navigation software and streamer positioning segment of the marine equipment market. ION’s INOVA division is presumably the leading manufacturer of vibrators for the land equipment market, but margins are said to be very slim for physical equipment and higher in the more technology intensive segments of geophones and cable systems dominated by Sercel and Geospace. 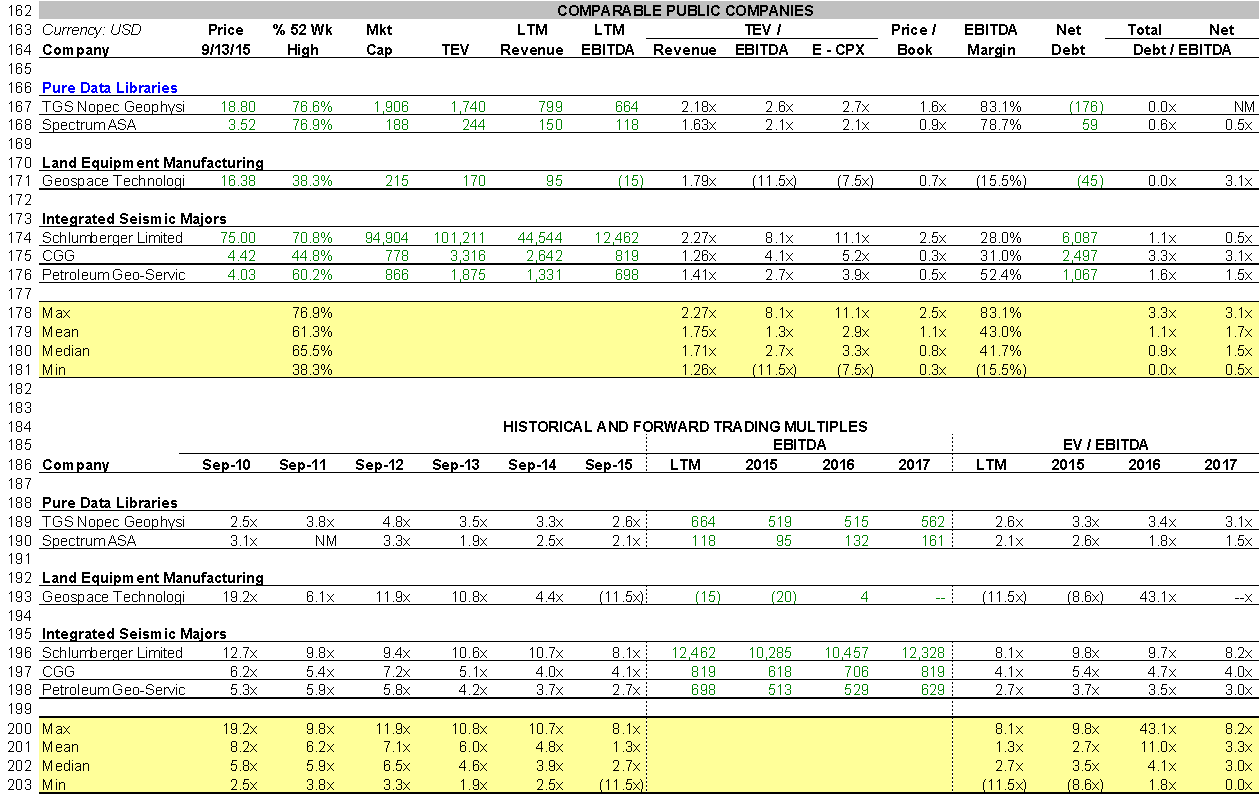 ION is trading at a low valuation relative to past trading levels. Its market capitalization and enterprise value have reached lows last seen in the depths of the financial crisis in 2009. 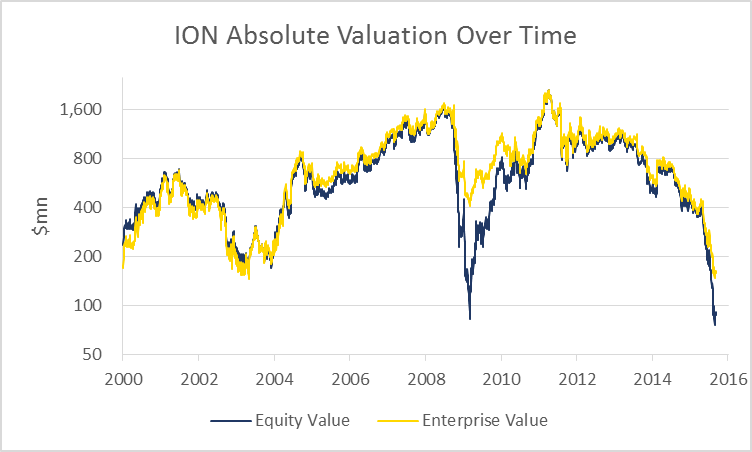 ION’s bond yields have climbed and bond prices have dropped into distressed levels, currently around a ~27% yield-to-worst and a clean price around 65c. 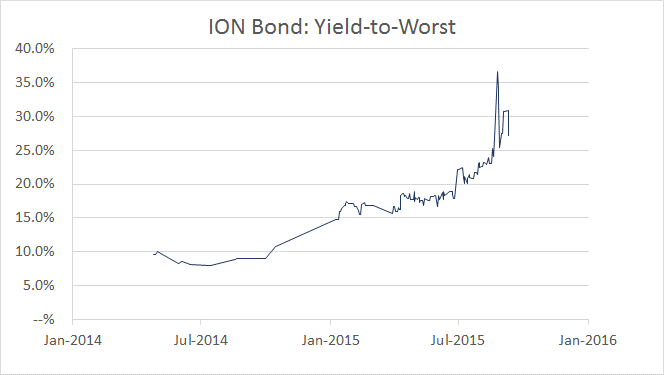 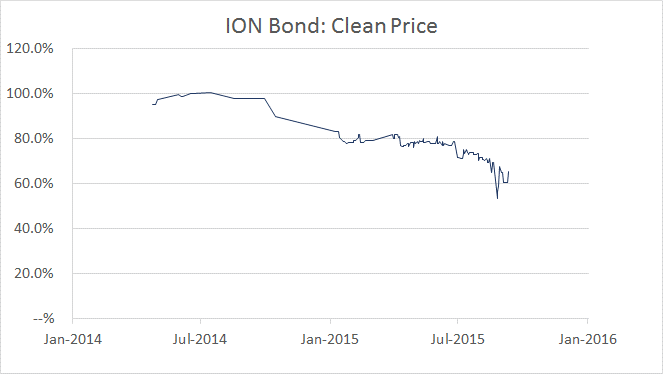 The best way to assess the quality of the MC business is evaluating the total revenues earned vs. the total capex spent on the library. As one can see below, ION’s Revenue / MC Capex generally is ~2x, quite comparable to what the leading multi-client peer TGS has been clocking, although ION’s 2013 and 2014 vintages haven’t been doing as well as TGS’s. 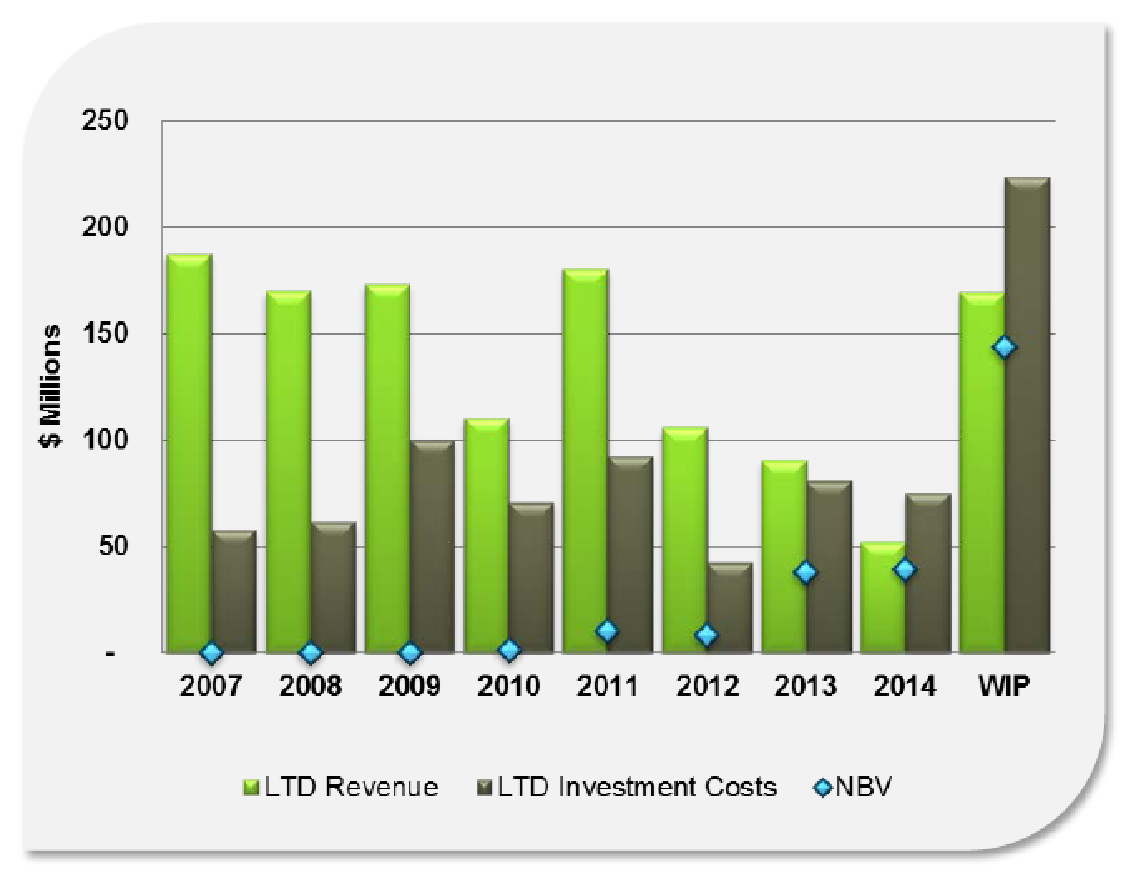 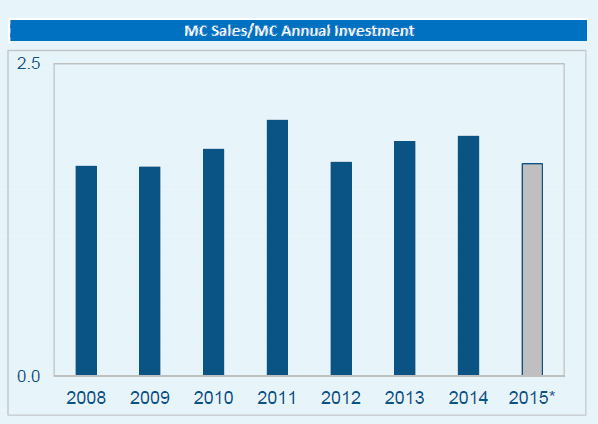 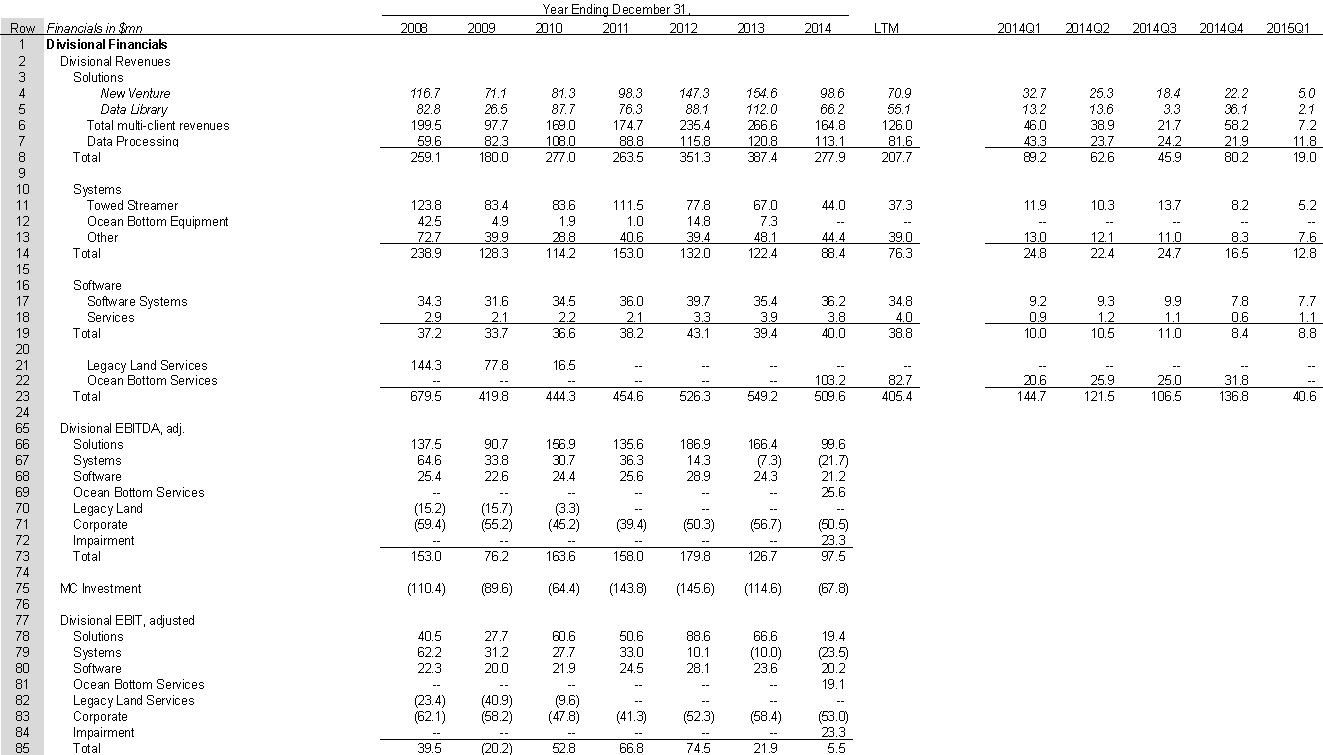 ION has taken a relatively conservative approach towards fully provisioning for the WesternGeco litigation in 2013, which has required it to unwind the provision thereafter. Furthermore, it has taken a large write-down of its multi-client library in 2014Q4

ION’s ability to generate cash is more obvious in the cash flow statement that adjusts for the non-cash litigation provision movements as well as the impairment of the data library.

ION’s balance sheet shows its strong cash position, although this could partially be driven by a reduction in account receivables. 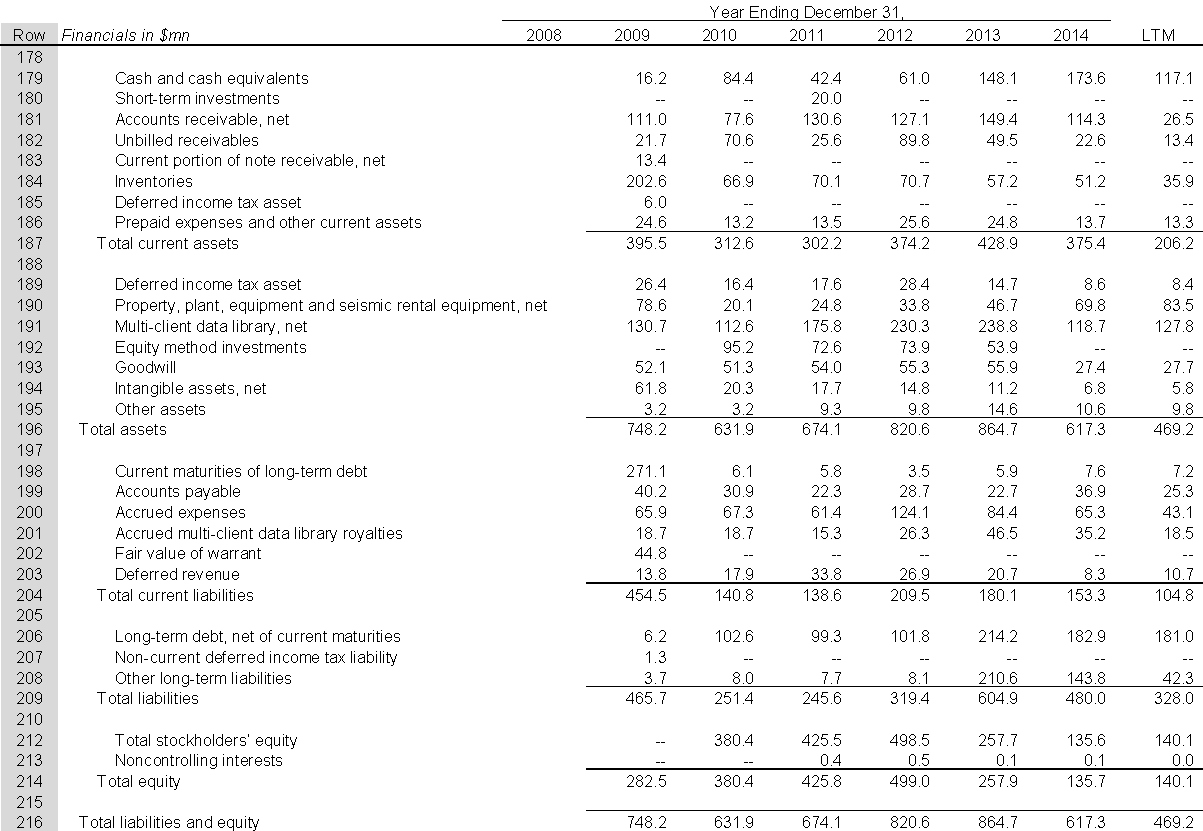 The bonds are guaranteed on a joint and several basis by domestic subsidiaries (within the dotted box) which represented ~22.6% of consolidated assets and 61.5% of consolidated revenues as of December 31, 2013. Note that it is unclear whether these figures are taking into account the financials of subsidiaries of guarantors too. 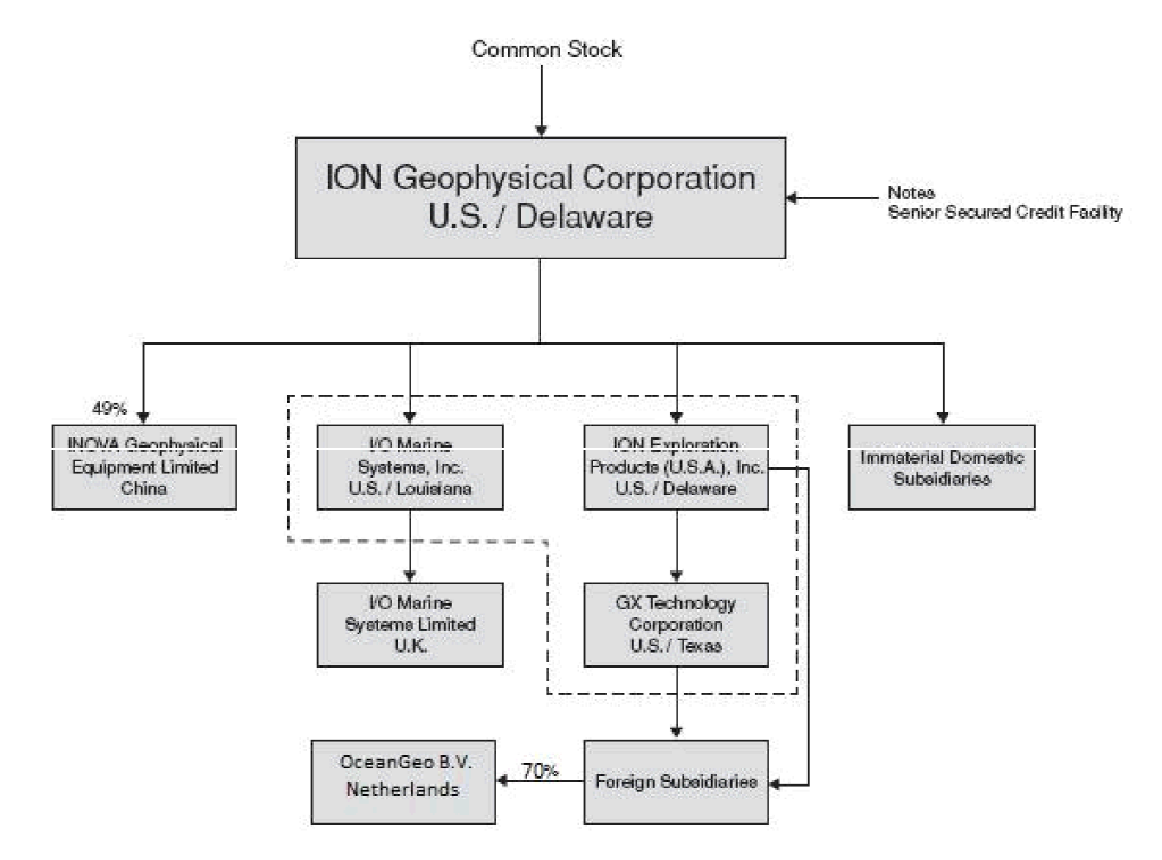 1. Potential bond buyback by ION or takeover by other large oil services companies (from the seismic peers, PGS or TGS are more likely as CGG is struggling itself and this is probably too small for Schlumberger to make a difference)

Are you sure you want to close this position ION GEOPHYSICAL CORP?

Are you sure you want to Flag this idea ION GEOPHYSICAL CORP for removal?