iRhythm sells a heart monitoring device, called the Zio patch, which is worn for 14 days and records heart activity for people with irregular heart rhythms. The legacy standard of care for these patients is a Holter monitor, which is a bulky monitoring device with up to 12 electrodes that is worn for 24 to 48 hours and may not diagnose some patients with infrequent symptoms given the shorter monitoring period (and thus repeat the process or use a secondary test).  IRTC has come up with a single electrode patch that is easier to wear, thus has higher compliance, and records for an extended period, resulting in a higher diagnostic yield than traditional Holter monitors. This $300 device must be removed and mailed back to iRhythm after the 14-day monitoring period. iRhythm then has a team that uploads the data to the cloud and uses their machine learning algorithms which generates a report that a technician than reviews for accuracy which is then sent to the physician for review.   Until recently the Zio was the only “extended Holter” patch on the market which allowed for outsized sales growth.

IRTC went public in October 2016 as a JOBS Act IPO valued at $360 million which has quadrupled to $1.6 billion.  During this time sales have grown at an impressive 63%; however, this has not translated to scale as losses have dramatically expanded and forecasts for timing of profitability have been continuously pushed out.  As Lakewood pointed out, in early 2017 analysts expected some operating leverage and forecasted EBITDA losses to go from a loss of $16 million in 2016 to a loss of $8 million in 2018. Nevertheless, the opposite has occurred, and only one year later revised 2018 forecasts now call for losses of $34 million. I believe this is a good short because IRTC is a one product company that no longer enjoys being the only product on the market (increasing competition), losses are increasing with no articulated path to profitability and trades at an excessive valuation.  The stock trades at 11x forward sales; however, using aggressive assumptions for penetration for extended Holter patches, sales are likely to decelerate ~2020, at which point the multiple is likely to be more in-line with the group at 4-5x implying $41 stock (on 2020 rev estimates with no discounting) or 40% downside from here.  Additionally:

What’s in the stock:

The momentum and sentiment factor for this stock is a 9-10.  People are excited for wearable health technology and IRTC is the only pure play and grew 53% last year and 43% last quarter with the multiple expanding to 11x sales from 7x.  The market is focused on sales growth and penetration and ignoring cash burn. The following is a summary of why the market is building in several years of uninterrupted growth.

Out of an estimated 4.8m procedures last year, Zio participated in 299k or 6% penetration.  It’s hard to estimate how much share Zio (or extended Holter patches) will ultimately reach but expectations are patches could get 40%+ and the sell-side and IRTC management think Zio will get the majority of that and are projecting smooth growth to get there.

But that’s only half the story.  The market is building in another 3m patients that aren’t included in the TAM.  These patients are asymptomatic, but given they have Afib, have a higher risk of stroke.  IRTC thinks that these patients should be monitored in order to measure Afib burden to decide whether they need anticoagulation drugs for stroke prevention.  The company spends a lot of time on calls discussing this opportunity and their recent press releases pump up this opportunity. These incremental 3m patience would essentially double the company’s existing TAM (existing TAM is 2.6m Holters, 1.3m Event monitors, 400k mobile telemetry)

The market believes that IRTC has a large competitive moat due, to great degree, to first mover advantage and resulting patient data (over 1.5m) for continued improvement of its machine learning algorithms to diagnose patients.  IRTC also provides the cardiologist with a report from its algorithms to save them from having to go through the data themselves, in addition to other back end services, such as claims processing. Bulls think this adds to the moat as doctors are already overworked and the report and back end services are another selling point.

Why is the bull case of doubling the TAM is unlikely?

I’ll answer this question with the question that many physicians at the recent Heart Rhythm Society conference were reportedly asking: Who would pay for it? I’ll show below why I think it is uneconomical to spend an incremental $1b to monitor 3m patients with no symptoms of Afib.

The population of salient/asymptomatic Afib is~3m.  At an average cost of Zio of $300, this would cost $900m per year to monitor.  The average cost to treat a stroke (not including lost time from work) is ~$9,000 (we only care about ischemic stroke with is much cheaper than hemorrhagic stroke).  This would require that monitoring this population prevents ~100k strokes per year to break even or 3.3% of the high risk population; which works out to be over 2x the actual incidence rate.  So, to make this economical, the cost of stroke needs to double or the actual incidence rate needs to be 5x what we previously thought it was.

While I understand this is a simplistic approach to analyzing the problem, and indeed the company is currently conducting a 3 year study to better understand the degree of risk of this population and economic impacts, the magnitude of the delta as illustrated above and sheer confusion the physicians had at the HRS conference  (according to Northland analyst) about this actually coming to life makes me think this is more of a hope than opportunity.

Furthermore, I have not had the chance to confirm this, but based on the data (chart below), I think the 7 day monitor time for the Bardy CAM is a good balance of diagnostic yield, potentially lifesaving time saved, and money saved.  As illustrated on the chart, the vast majority of the incremental arrhythmias detected beyond the 2 days of a Holter happens by day 8 (diminishing returns). Leading to the question, is 14 days necessary and if so in how many cases? If diagnostic yield is the biggest concern than why not use an MCOT with a higher yield (absent from chart above, 88% diagnostic yield) which can transmit data wirelessly at the time of arrhythmia? 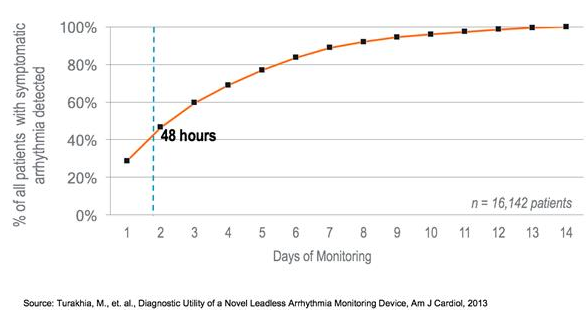 More on the competitive environment

As illustrated on the chart on the left, the company posted some operating leverage ahead of the IPO but began deleveraging again in 2017 and more so in Q1-18.  The company blamed a growing sales force; however, I think that explains only a small piece of it as sales productivity was flat in Q1 at 1.3m per head and increased in 2017 from 1.0m/head in 2016.  The company has limited disclosures so it’s difficult to understand where the lack of leverage is coming from(no unit disclosures, opex breakout etc), but I think it has more to do with them being a service company and not a device company.  For example, on the Q1-18 earnings call, management cited increased demands from customers on the back end which I view as an underappreciated expense. The company and analysts tout the Zio report that physicians get, and thus limited work the physician needs to do, as a competitive advantage; however, it seems the analytics and Zio patch is not enough for cardiologists to adopt the product/service as IRTC is now doing other back end work such as claims processing to further incentivize health systems to adopt it. 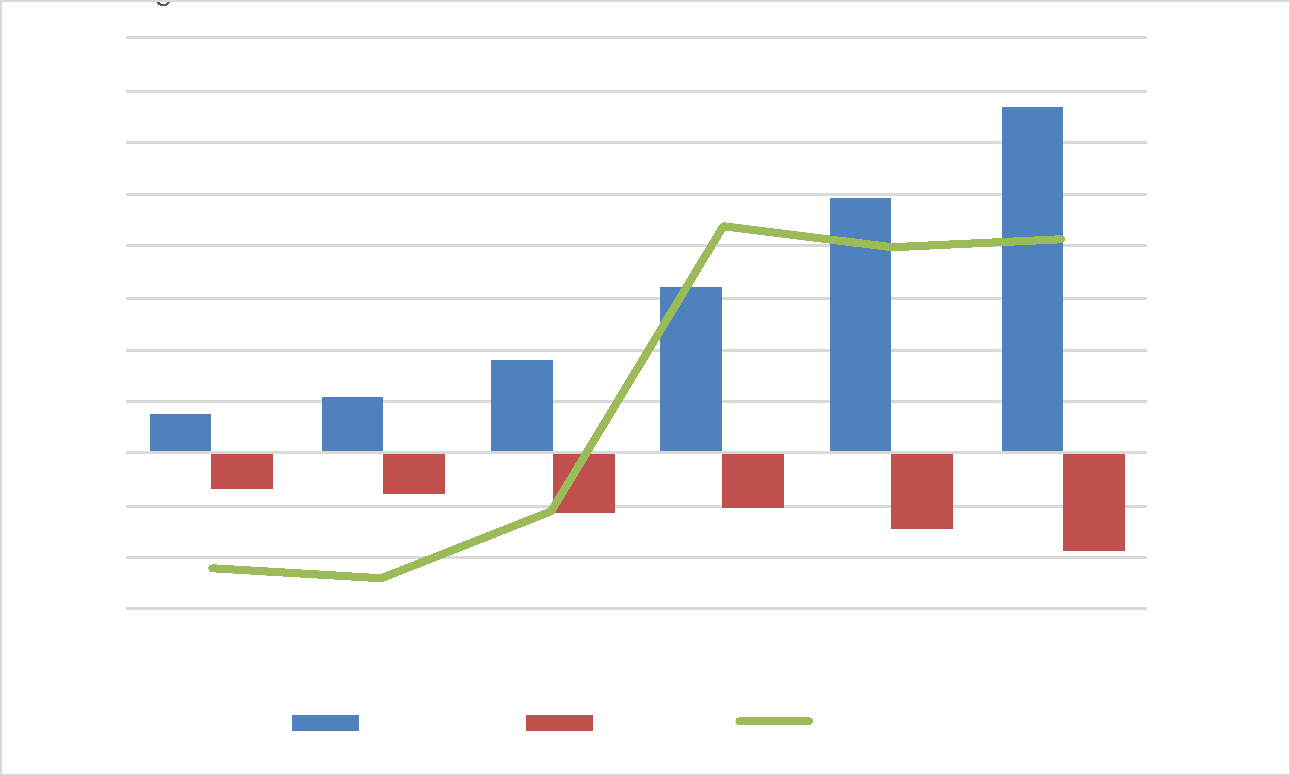 It’s difficult to understand where the leverage will come from given the variable cost nature of service companies.  The largest leverage I think the company can get is on sales rep productivity. Management thinks it can ultimately get to $2m per head and bring gross margins to 75-80%.  Another leverage point would be on R&D but IMO, not much as they are at 13% vs peers at scale of 10-17%. Giving management the benefit of the doubt and assuming 80% gross margins, $2m per rep, 10% R&D margins, 2017 EBIT% would have been less than 10% and using more base case assumptions would have been less than 5%.

The company trades like a med tech/device company when in reality it is a services company and its margins at scale will look more like a services company.  Given that it is valued on a P/S basis, it is possible that it can grow into its valuation; however, using aggressive assumptions for penetration for extended Holter patches, sales are likely to decelerate ~2020, at which point the multiple is likely to be more in-line with the group at 4-5x implying $41 stock (on 2020 rev estimates with no discounting) or 40% downside from here.  If it still commands a Med tech multiple of 8x in 2020, the stock would be at $76-$77 or 10% upside.

Ways can be wrong

market stops being so frothy...

Are you sure you want to close this position IRHYTHM TECHNOLOGIES INC?

Are you sure you want to Flag this idea IRHYTHM TECHNOLOGIES INC for removal?