KSL Holdings (KSL) is a Malaysian family-run real estate company with a good track record currently trading at 19.5% of book value. It is an opportunity to buy into the real estate bust in Malaysia in a vehicle that is unlikely to lose money while we wait for recovery.

We believe the stock is cheap due to a combination of these factors:

(2) Perception of value trap with risk of take-under;

KSL was founded and is run by three brothers, each responsible for a different area of the business. Insiders collectively hold about 64.5% of stock. The family business is being run very conservatively.

KSL has a residential real estate development business with a construction arm in the states of Johor (located in the south of Malaysia and linked to Singapore by causeways) and Selangor (which encircles the capital Kuala Lumpur). Its focus is on landed developments. It also engages in real estate investment, owning and running one of the main malls in the city of Johor Bahru, 10 minutes from Singapore, and various smaller malls in the state, as well as a 900-room hotel at its main mall location.

While results have flat-lined in the past few years, KSL has compounded its book value at >14% over the past fifteen years using little debt. Management has stuck to its circle of competence and avoided self-dealing.

Inventories are split between completed unsold units and work in progress due to be completed within 12 months. In a typical year KSL has operating margins in excess of 30% on the sale of completed units, driven by some combination of skill, in-house construction arm and low-cost land. Even in the current market where in Q3 2020 Johor State home prices declined 5.6% yoy it is nowhere near enough to impair the inventory value.

Unit sales were down 60% yoy in 9M 2020, double the rate of the overall market. Due to the pandemic Malaysia enacted a Movement Control Order that disrupted the construction and development industries with housing development not considered an essential business and unable to operate the full year. KSL has never had a losing year in its development unit, even at such drastically reduced volume it is likely to break even in 2020.

We are using the full RM 845 million in calculating liquidation value and believe it is conservative.

KSL carries its land bank at cost of RM 1,035 million and has been adding to it over time. On an average cost basis it holds its development land at about RM 10 per square foot. It is located in livable areas with good infrastructure in place. This represents a mix of cheap older land and more recently acquired parcels. The most recent major additions were in 2018 when KSL made purchases at RM 22 and RM 26 per square foot for landed property development near Johor Bahru, totaling RM 311 million which is still held. One planned township developer recently bought large parcels at RM 9.5 psft. KSL transferred RM 22.5 and 12 million worth of land into property development costs in 2019 and 2018, respectively, indicating its low cost basis. RM 1,035 million is likely a conservative liquidation value for KSL’s land assets.

KSL’s main property is the KSL City Mall in Johor Bahru carried at RM 439 million, consisting of about half cost (built in 2010) and half fair value gains. It is well located within 10 minutes from the Singapore border and also very central within Johor Bahru city. Reviewers describe it as “anchored by Tesco hypermart, it's part of a huge complex complete with its own hotel, multiple spas and salons, a cinema, a massive Daiso (everything RM5.90 type of store), many restaurants and what feels like 500 shops all selling cheap barang barang” (this loosely translates to everyday items). Annual rentals for the mall are about RM 80 million.

The KSL City Hotel in the same complex is carried at RM 71 million or only $19,700 per key. KSL Esplanade Mall is a new mall under development in Klang (50 km from Kuala Lumpur City Center) on which KSL has so far spent RM 164 million and is likely to spend a few hundred million more. KSL has a neighborhood mall anchored by a Giant supermarket in a district 15 minutes away from Johor Bahru carried at RM 64 million and some other properties with a combined value of RM 210 million. It is likely the income-generating investment properties are worth at least the combined RM 784m book value because they've been consistently earning 70-90m until this year. Then we add the RM 164m under construction at cost for a total of RM 948m.

This year shopping everywhere took a big step toward online which is a risk factor but we believe there is still a place for malls especially anchored by a big supermarket, with salons and other local services, cinema, food courts, etc. in a strategic location, as opposed to a luxury goods mall. KSL City Mall is also challenged by new mall openings, especially the Midvalley Southkey Mall. In 2019, KSL Mall occupancy was 90-95% and the 900-room hotel was 60-70% full.

Capitaland Malaysia Mall Trust with 5 malls and Hektar REIT with 6 regional malls are valued at EV of 14.4x and 13.3x 2019 NOI, respectively. This valuation would give KSL’s income-producing investment properties, including their share of overhead allocation, a valuation of RM 1.1 or 1.0 billion, respectively, 30-40% above their carrying amount.

If we take the EV of roughly RM 400m and capitalize some amount of overhead, such as director salaries at full RM 45m + staff salaries that we expect to come in at around 30m (total admin expense is down 28% ytd) at 10x then it's 750m for a total of 1,150m. It would still represent a significant discount to the net assets.

The controlling family owns almost 2/3 of stock. There is no independence within the board, all insiders, key employees and "independent" directors have been with the company since the beginning.

There are some rumors on Malaysian message boards saying that insiders are suppressing the stock price to take it private.

KSL introduced a dividend policy in 2014 equal to 40% of annual net profit after tax from operations (excluding any fair value gains) and followed it for only 1 year. Management cites the need to conserve cash for development projects, such as the Klang Mall development.

Management pay is very high at US$11 million per year not only for Malaysia but worldwide for a small cap. The shareholder base has voiced opposition but there isn’t much they can do, especially while having the CEO on the Compensation Committee. However, it can be argued that the pay has been deserved through shareholder value creation.

We believe it is a good risk-reward because book value conservatively represents liquidation value giving us a large margin of safety and allowing for time for the discount to narrow. We believe the risk of take-under is somewhat mitigated by the discount to book value, the track record of profits and the fact that management has never moved against minority shareholders though related party transactions, dilution or any other such way.

The 3 brothers have done little trading in the stock. However, in recent years they’ve stepped it up and from April 2019 to date collectively increased their stake by 8.3 ppts. Their most recent purchases in May 2020 were made at similar price levels as today. In 2019 they paid between RM 0.79 and 0.90.

This is a bet on the future of the Malaysian economy at a discount. Malaysia has sustained over four decades of rapid export-led economic growth which has helped it get close to becoming a developed economy. Malaysia has the tailwind of a young population with median age of about 29.

While real estate suffers from supply overhang, prices themselves have decreased little, making real estate companies whose P/B ratios have gradually declined to 0.3-0.5 either a relative bargain or a sign of things to come in the underlying real estate.

Between 2010 and 2019, the average y-o-y increase in house prices of 7.9% surpassed income growth of 5.6%. However, house prices have moderated since 2017. The current median price to income ratio nationally and in the Selangor state is around 4.0, higher than the ideal 3.0 but essentially the same as in the United States. 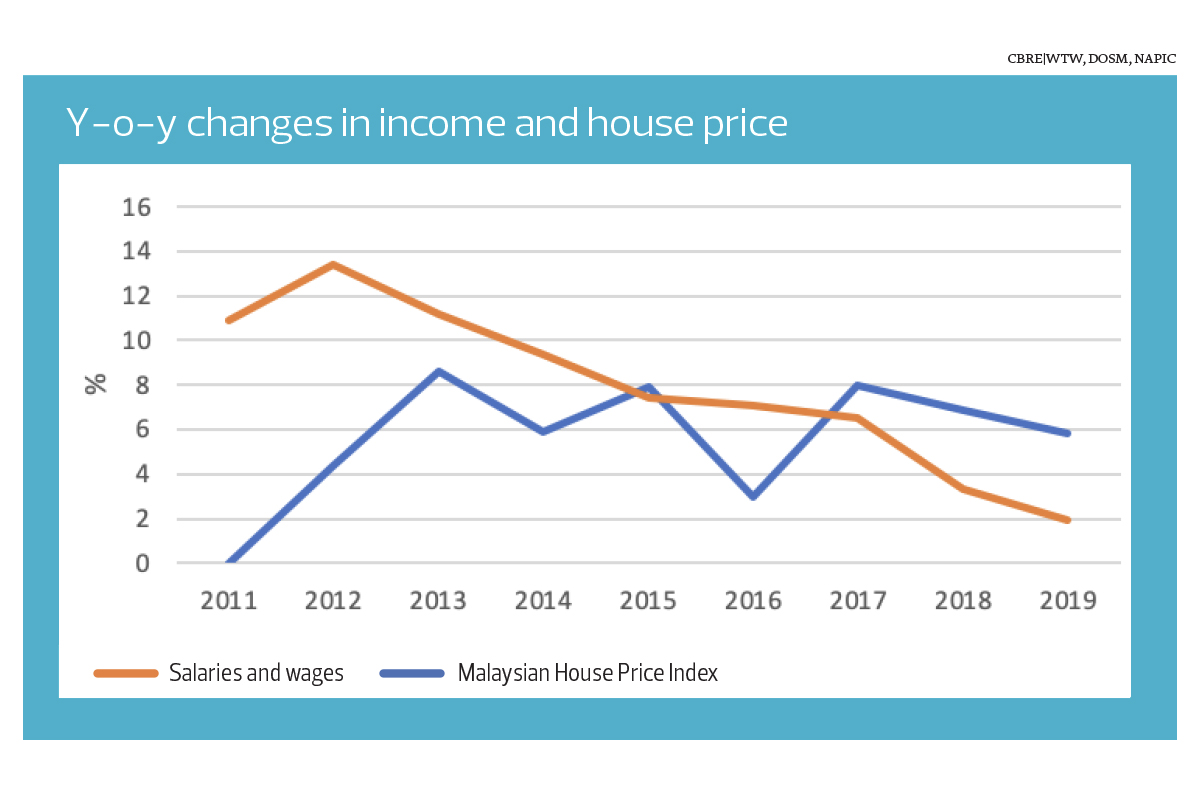 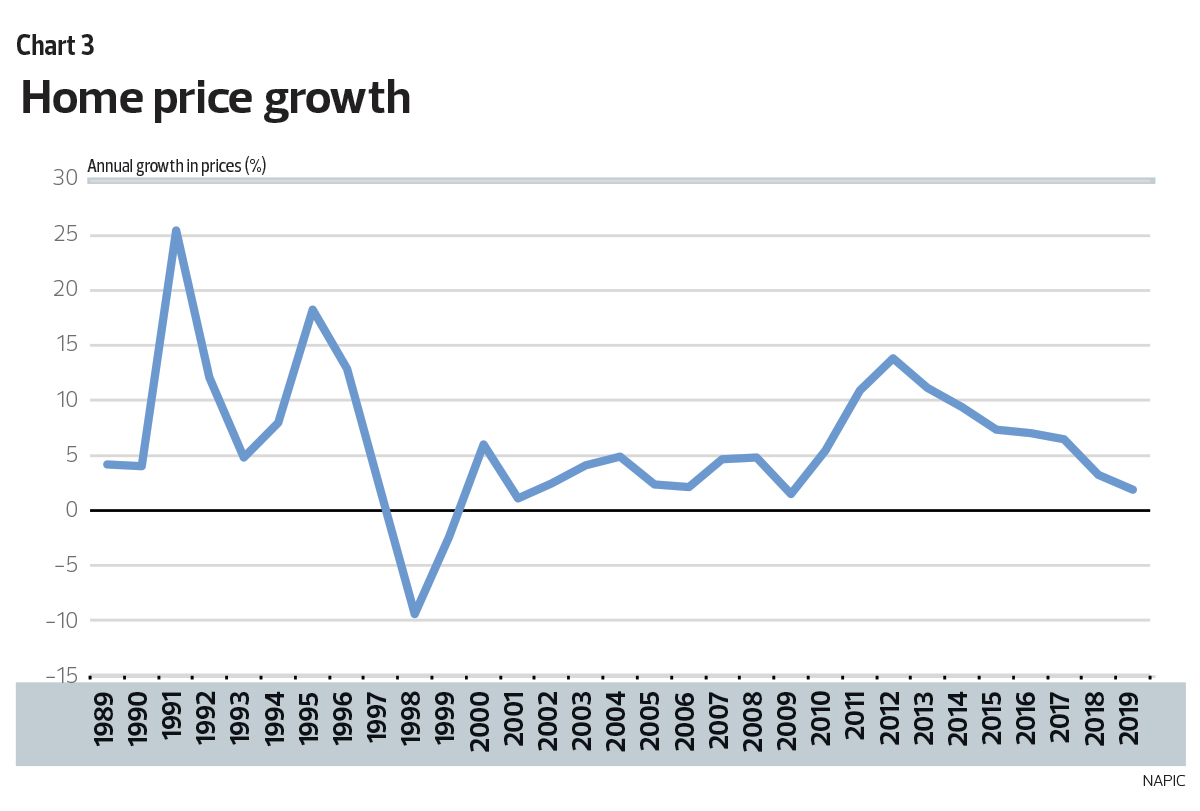 According to data from Statistics Malaysia and its National Property Information Centre (NAPIC), between 2016 and 2019, the number of residential developments increased in tandem with household growth. During that period, about 100,000 new households were formed every year while the annual new completion of residential property was around 80,000 units.

With the population at 32.65 million in 2020, against the existing total residential housing stock of 5.84 million units and the 2019 household size of 3.9 persons, the number of living quarters required is 8.37 million units. It would appear that there is a shortage in housing supply of 2.52 million units in Malaysia. 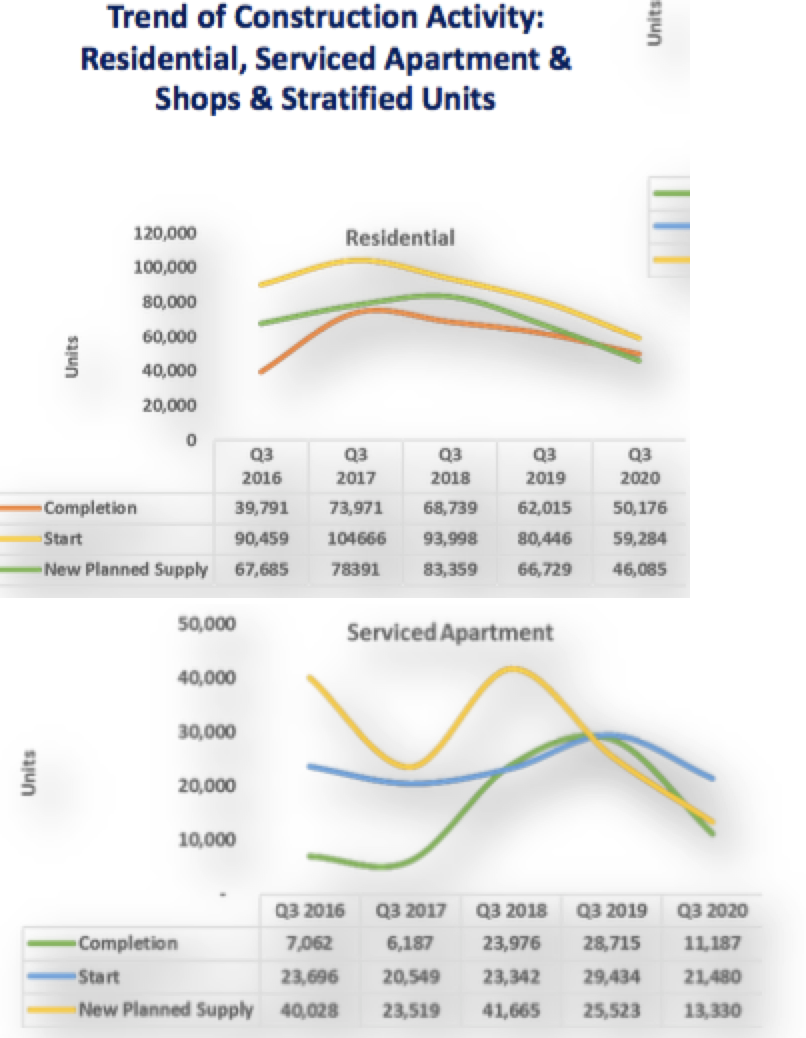 The near term property market sentiment is expected to improve due to the reintroduction of the Home Ownership Campaign, Real Property Gains Tax (RPGT) exemption, stamp duty exemption, and the removal of the 70 per cent margin of financing limit. Interest rates are at a record low also.

Recovery in the Malaysian economy and real estate sector.

Are you sure you want to close this position KSL Holdings?

Are you sure you want to Flag this idea KSL Holdings for removal?