Lawson Products (LAWS) is a distributor of consumable MRO supplies. The opportunity exists as a result of the market's focus on short-term earnings which are depressed by the company's investment in growing its sales force as well as weakness in industrial demand in 2015/16.  However, this near-term focus ignores the potential for significant earnings growth as the LAWS salesforce matures.  With downside to ~$15 but upside to >$47 LAWS is an attractive risk reward at ~$20.

Lawson provides vendor managed inventory for low-ASP, high-turn consumables (fasteners, abrasives, adhesives etc) for industrial consumers (United Rentals, Schlumberger, Wolseley etc).  In practice, this means that LAWS reps got to a customer location where there are generally Lawson branded cabinets and boxes of new supplies waiting.  The rep will unpack the boxes and put the product away and place an order to replenish the inventory on a regular basis.

These products are low dollar value, service intensive and being mission critical (don't want to have a $300k machine idle for want of a $1 part). These characteristics create a sticky customer base that values itsability to outsource the management of these parts and lower the willingness of the consumer to price-shop (saving 5% on a $1 part not worth the headache).  Customers place significant value on the time savings LAWS provide and on not having to worry about managing this inventory.  Here are a few customer comments:

“Since we switched to Lawson, I don’t need to worry about running out  of something or having to order something for a job. It’s all taken care of for me. That takes a big load off my shoulders. I always know that what I need is going to be there.”

“Prior to Lawson, we were spending hundreds of dollars a month on rush delivery and maybe 20 or so man-hours a week sending someone to pick-up parts. My Lawson Rep takes a lot of work off my shoulders...”

“Lawson…provides reliable management of our free access items that are critical to our operations…Knowing that Lawson is managing these products, we can focus on our maintenance services and other critical inventory items."

Lawson saves me a lot of time. (My salesperson) knows what I use, and he’s been doing this with me for so long that I just don’t have to worry about it. I’m a one-man show here; I don’t have any parts people. I’m the department, so that’s really valuable to me.”

Here is an example of the Lawson cabinets: 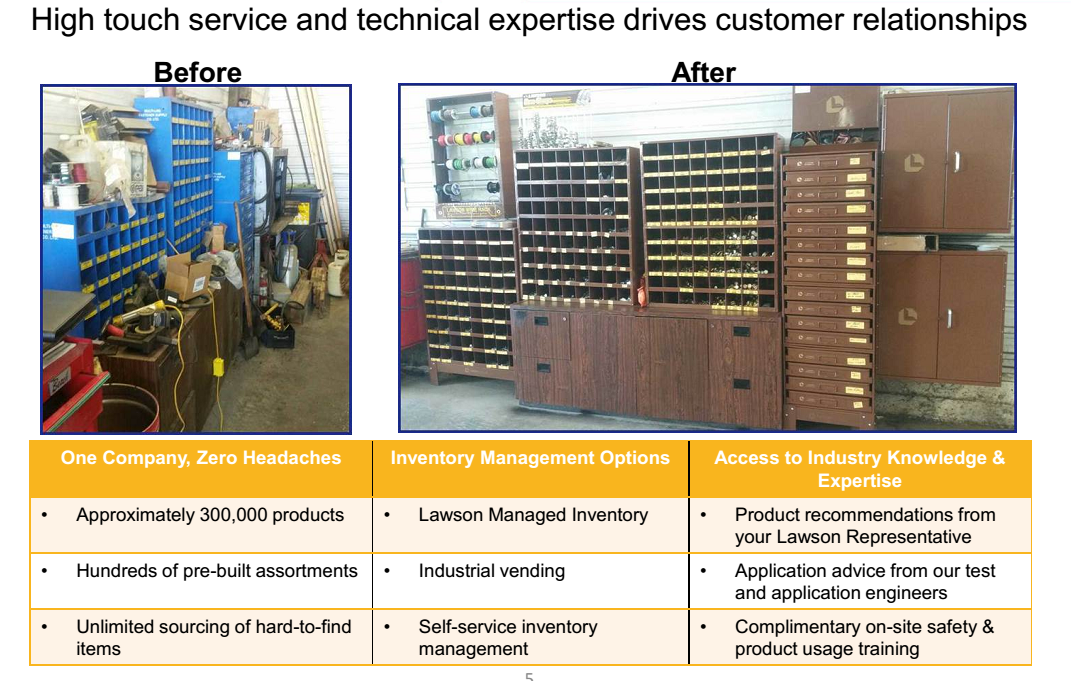 The company estimates its TAM is ~$20-25bln and the competition is comprised mainly of hundreds of smaller local mom and pop or regional players but also includes larger players like MSC Industrial (acquired Barnes Class C business which was a very close comp), Grainger, and Fastenal.

The key driver of upside is the improvement of the productivity of the LAWS sales force as measured by Sales per Rep per Day.  This metric has suffered due the weak industrial economy in 15/16 and as a result of to the significant expansion of the LAWS sales force (from 866 at YE 2014 to >1000 at YE 2016).  New reps are much less productive (yr 1 rep $300 per day, year 5 rep almost ~1,600 per day) because it takes time for them to build out their routes.  It generally takes LAWS reps 2 years before they become accretive to the company's bottom line.  This increase in inexperienced reps has helped drive a decline in sales per rep per day from 1,368 in FY 13 to 1,098 in FY 16 and limited the ability of the company to efficiently utilize its fixed cost base.

Here is a chart showing sales per year compared with various levels of sales rep maturity.  As you can see, sales per year increase from ~70k for a year 1 rep to over $400k for a rep with greater than 10 years experience. 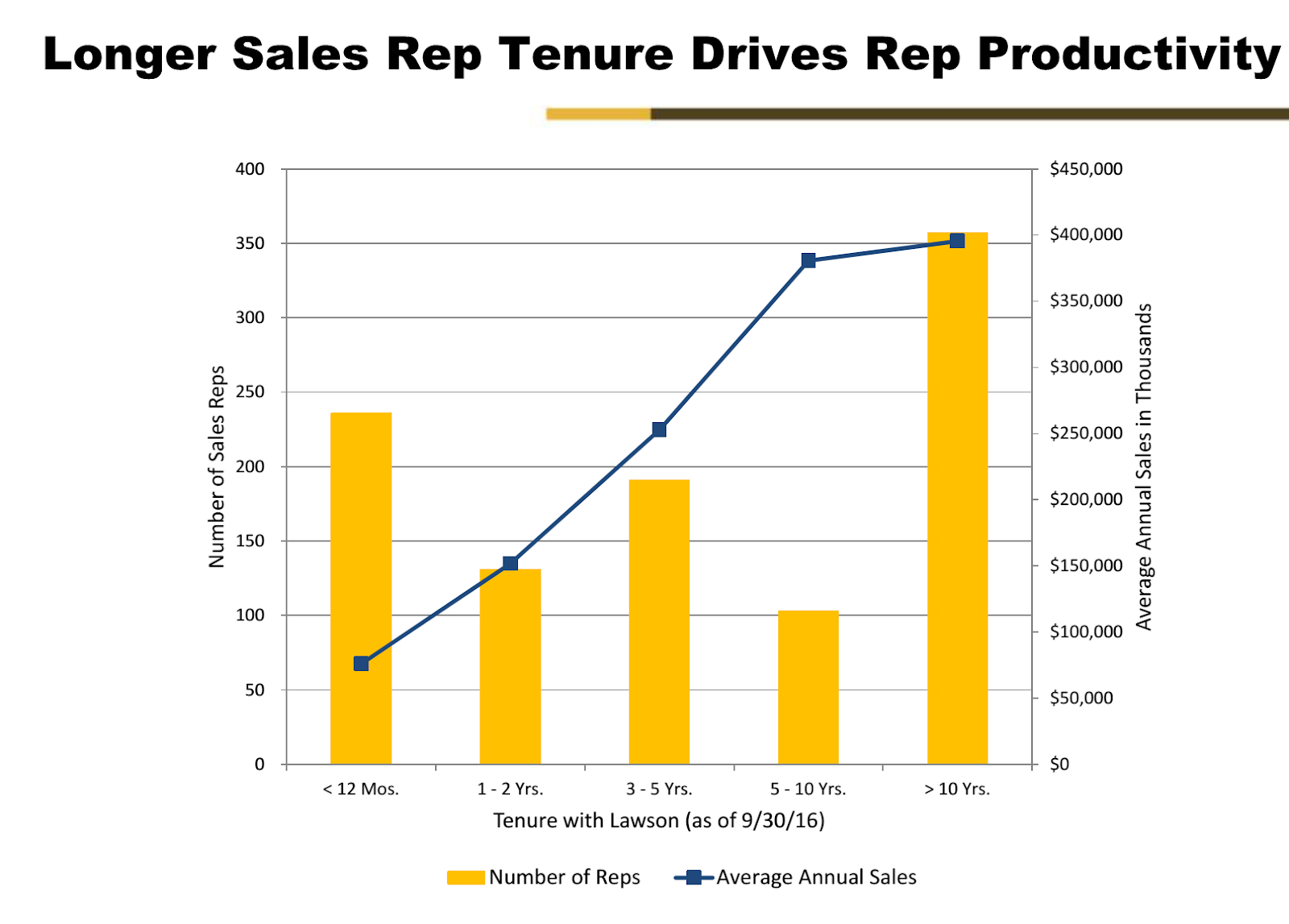 If sales per rep per day returns to $1,350 in the mid-term, then sales would be ~$370mln with minimal new rep growth.  The company's current distribution footprint has capacity to almost $400mln in sales so those incremental revenues would drop to the bottom line at a 25% incremental margins, driving ~37mln of EBITDA and close to the company's 10% EBITDA mid-term margin target.  That EBITDA could be worth $47 per share at 12x EBITDA and 18x FCF.  Given the consumable nature of its products, high gross margins and the low churn of its customer base, LAWS deserves solid multiples on its cash flow. 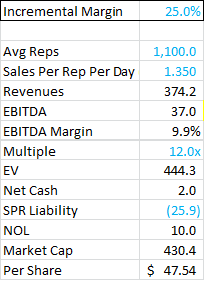 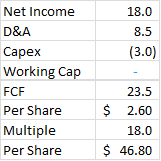 Another way to think about upside is that closest peer Barnes's Class C division was acquired for ~1.5x trailing revenue by MSC in what was considered an attractive deal.  1.5x trailing LAWS revenue would be ~$44 per share.

LAWS has been actively acquiring smaller players ($6mln spent in FY 16) and given the success of those acquisitions will likely start rolling up more mid-size players ($10-40mln of revs) going forward which could be  a quicker route to higher revenue/cash flow because acquired reps generally come with an existing book of business.

There has also been significant insider buying from 10% shareholder and new board member Luther King Capital Management from ~$16-$23.

While LAWS products are less cyclical due to their consumable nature, they are still tied to industrial demand (if you use the machines less, you consume fewer parts).  In a downside scenario, I assume that EBITDA does not improve off 2016 results of 11.4mln. 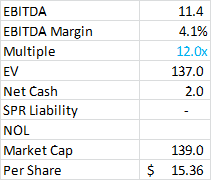 It should also be noted that 2016 EBITDA is abnormally depressed. New sales force hires earn a declining base compensation for the 1st 3 years before switching to a commission only model.  At 9/30/16, there were ~240 reps <12mos. Assuming a $35k initial salary, that's >$8mln of salary expenses for <12mos reps in FY 16 EBITDA.  After 12 months, the fixed salary begins a consistent decline until the reps are commission only at the end of the 3 year.  Thus, these elevated 2016 labor costs should be recovered either through sales growth as reps begin to earn large commissions or lower salary expenses as the reps mature.  12-24mo reps are also slightly loss making and the company does not expect a rep to break even until 24 mos. While there will always be new, loss-making reps, current levels are far above normal and have materially depressed 2016 EBITDA.

2016 EBITDA also includes ~1.2mln of expenses related to the closed Fairfield NJ facility which will not recur in 2017.

$15.50 per share is also close to ~50% of 2016 revs.  This revenue valuation is an inexpensive multiple on  a recurring business with sticky customers and 60% gross margins as well as a very healthy balance sheet.  LAWS talks about paying 60-90% of revs for much smaller, inferior businesses and MSC paid 1.5x for closest comp Barnes Class C.

Commentary from peers (emphasis mine) suggests that the industrial economy has started to turn a corner which should drive upside in sales/rep/day:

The first quarter was the strongest that we've seen in the last two years. And frankly, that strengthening was also evident through the quarter, with March finishing up 8.4%.- FAST  4/12/17 CC

Industrial Production returned to growth, with an even stronger showing from key sub-components like primary metal, fabricated metal, and machinery, areas that are more pertinent to our business.- FAST  4/12/17 CC

"The growing optimism in the industrial economy has continued, as the outlook has turned noticeably more positive over the

<A - Erik David Gershwind>: Yeah, Scott, so the good news here is that the improvements we're seeing in the

numbers and in customer sentiment is pretty broad-based. So, we're finding it across most of our customer types and

most of our end markets things are improving. MSM 4/6/17 CC

Are you sure you want to close this position Lawson Products?

Are you sure you want to Flag this idea Lawson Products for removal?