Description/What you need to know

MarineMax is a roll-up of boat dealerships which has resulted in the company being the nation’s largest recreational boat and yacht retailer. Mix is 70% new, 15% used and the remaining ancillary such as F&I and P&A.  They focus on premium brands, such as Sea Ray, Boston Whaler, Meridian, Hatteras, Azimut Yachts, Ocean Alexander, Galeon, Grady-White, Harris, Crest, Scout, Sailfish, Sea Pro, Scarab Jet Boats, Aquila, and Nautique. In addition to new and used boats and related marine products and services HZO provides yacht brokerage and charter services. MarineMax currently has 63 retail locations in 16 states.

What’s baked into the stock?

HZO is up 21% YTD and has been volatile the past year bouncing between $18 and $24 per share (currently sits at $23) with the biggest swings around earnings beats/misses where it’s common for the stock to move 20% on the day earnings are released.

The consensus view is that we are in a cyclical recovery for boats which still remain 40% below the prior’s cycle average in terms of unit sales.  HZO’s valuation reflected this bullish view entering the year where it was trading above 12x EV/EBITDA, above the recent average of 10x. In June, the company’s largest supplier, SeaRay (owned by BC), announced they will be discontinuing their sport yacht and yacht segments (>40 foot) which pressured HZO’s valuation.  SeaRay is the company’s largest manufacturer and makes up over 20% of sales with the discontinued business leaving over a $100m hole, or >15% of new boat sales. The company has since reported its FQ3 which missed sales and earnings estimates, in part due to the gross margin pressure caused from the uncertainty of SeaRay closing half its business.  The stock however has been on an upward climb since the June quarter was reported, now 5% off recent highs, as management was confident the SeaRay hole will be filled next year with other models and the worst of the gross margin pressure is behind them. Furthermore, tightness reported at engine manufactures has risen confidence level for 2019. With that said, the valuation at 9.4x out year EBITDA suggests some skepticism remains.

I think the boat retail business overall is a bad business which underearns its cost of capital throughout the cycle, burns cash, and the power boat industry is in the later stages of the cycle and is in secular decline. The company is expensive on normalized earnings, as it is generating ROIC and margins at the upper end of historical ranges.  Furthermore, management is beginning to acquire new stores again, toward the top of the cycle, which has historically destroyed capital which is resulting in higher levels of debt (floor financing which is floating) in a rising interest rate environment.

IMO HZO is a great short above 10x EV/EBITDA, even if the industry continues its recovery.  At >10x, the stock has historically has had little upside and has a history of missing estimates every few quarters even in a strong cycle.  At these levels I think the stock has 20% downside in the short term on a miss, 40% downside on a midcycle basis and 75%+ downside in an industry downturn.  In an upside case where the cycle continues for two more years and the company hits estimates of $85m in EBITDA in 2020, I think the stock has 20% upside on historical late cycle multiples which presents an attractive risk reward and little risk of permanent loss of capital

Why HZO is a bad business and is over-earning

As shown below HZO generates ~$0 free cash flow.  It has actually burned $6.7m over the last 5 years and generated only $11m cumulatively since the cycle bottomed 8 years ago (less than 2% of the current $625m market cap).   Over the last full cycle, which I believe was structurally different, the business generated ~$70m in free cash over 9 years (11% of current market cap). Most of this free cash flow came in 2009 and is due to $263m in inventory liquidation as the company closed down over 30% of its stores. 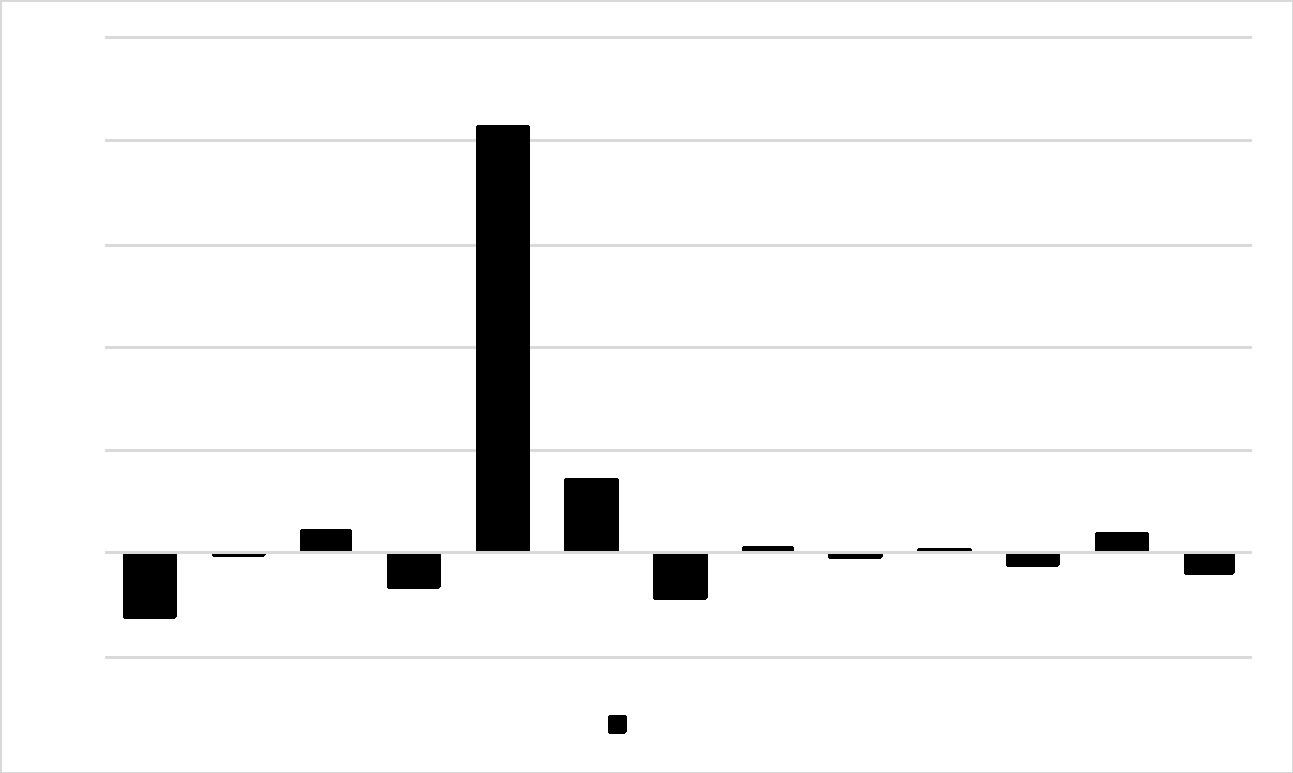 The charts below illustrate the structurally low returns and how company is over-earning compared to a normalized environment.  As shown in the left chart, ROICs this cycle are meaningfully below prior cycles as the industry is in secular decline. The right chart shows the persistence of under-earning their cost of capital and notably shows how the cost of capital is inflecting up as the ROIC seems to have peaked and is coming down

This is happening even as sales per store have surpassed the prior peak (more evidence they are over-earning). 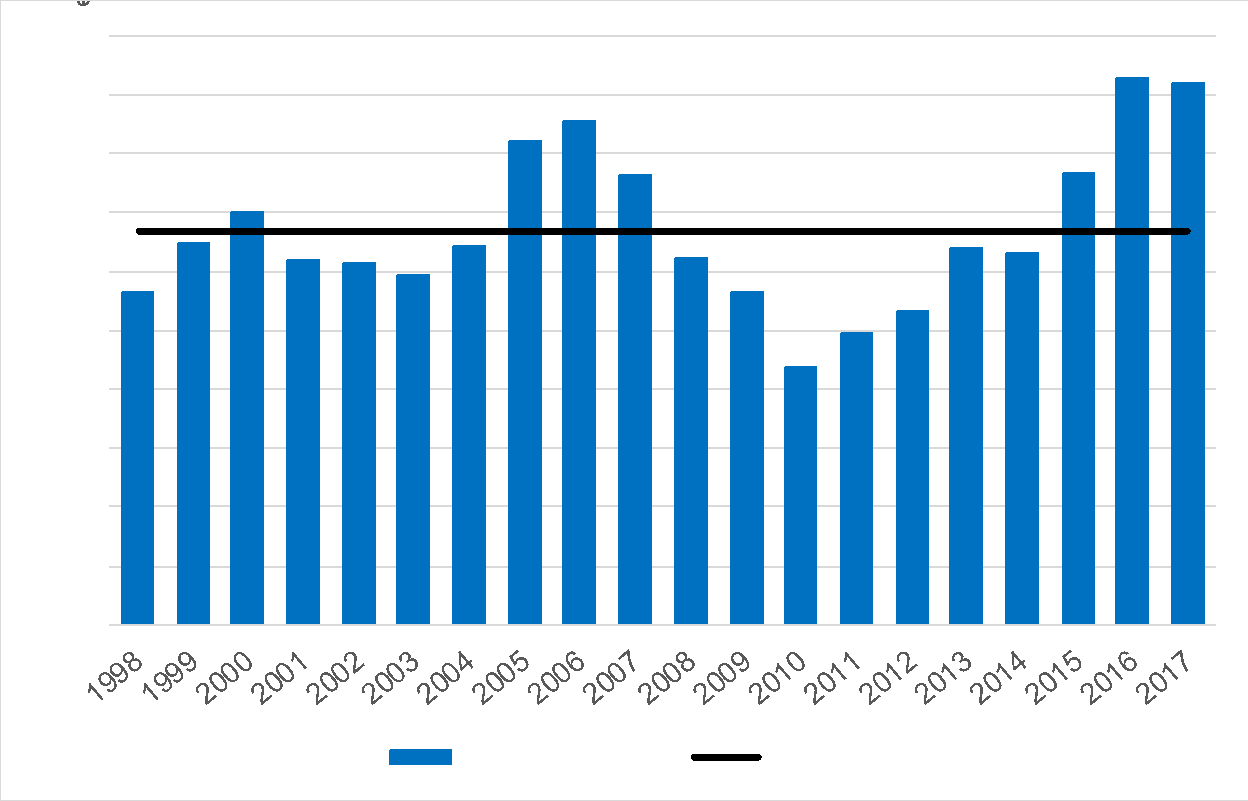 This unintuitive relationship of sales per store surpassing prior peaks at the same time ROIC is well below prior peak can be reconciled by the mix of boats and the resulting pressure on inventory turnover.  As shown below increases in SSS/Sales per store is driven by ASPs and not unit growth. Indeed inventory turns are ~1/3 below where they were in 2000. This again speaks to the secular decline in boating (discussed more below).

As shown below, gross margins also appear to be at peak.  While this is likely to remain given clean inventory and a low level of discounting currently, it is unlikely to get better (Days of inventory appear to have bottomed) and likely worse in the short term given the SeaRay overhang.  From an EBIT margin perspective, the company is still below prior peak, although above average. EBIT margins still have upside, albeit IMO not much given incremental margins are HSD and inventory turns are structurally pressured. Assuming the industry accelerates to HSD growth for the next two years and historical 8% incremental margin holds, only 20bp of margin expansion remains. 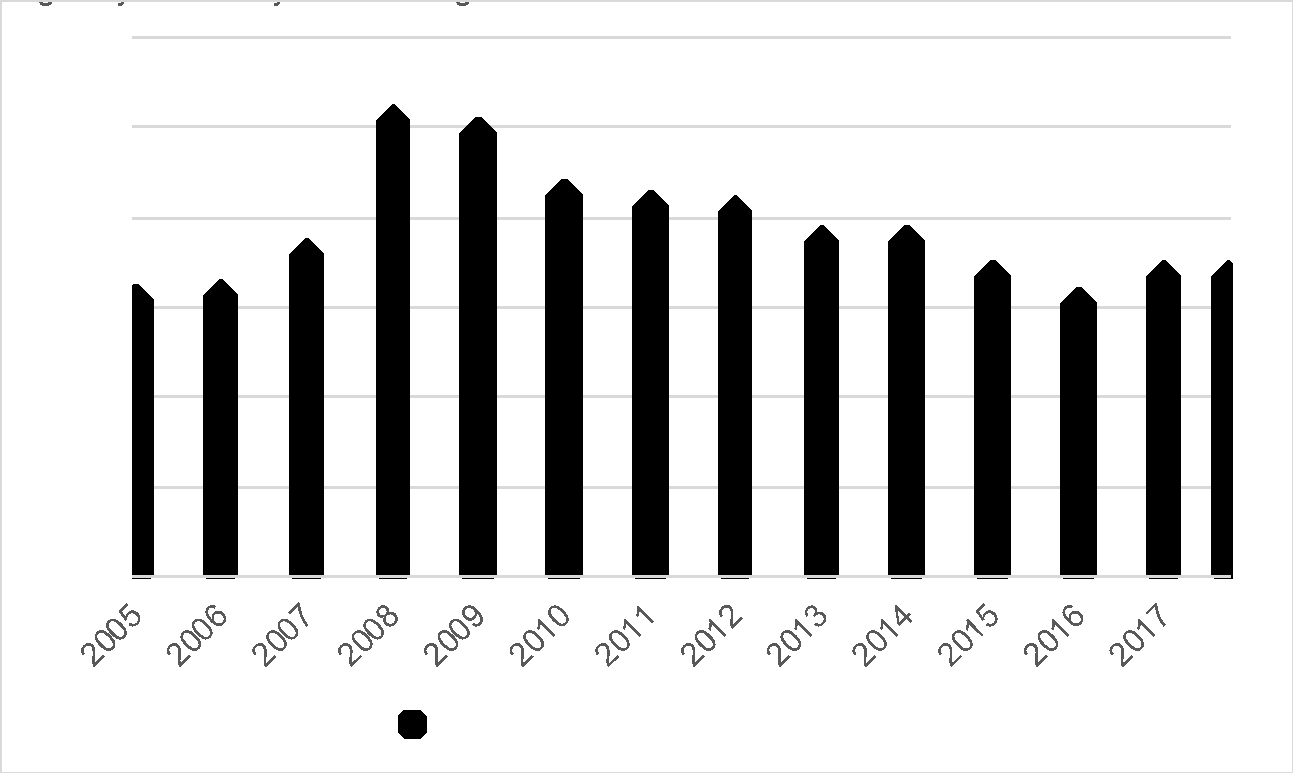 Why the bull case of a return to industry average units is flawed.

Below is a chart in the company’s deck showing how much more room the industry has left in its recovery.  Note: current units are on an annual pace of 210-215k 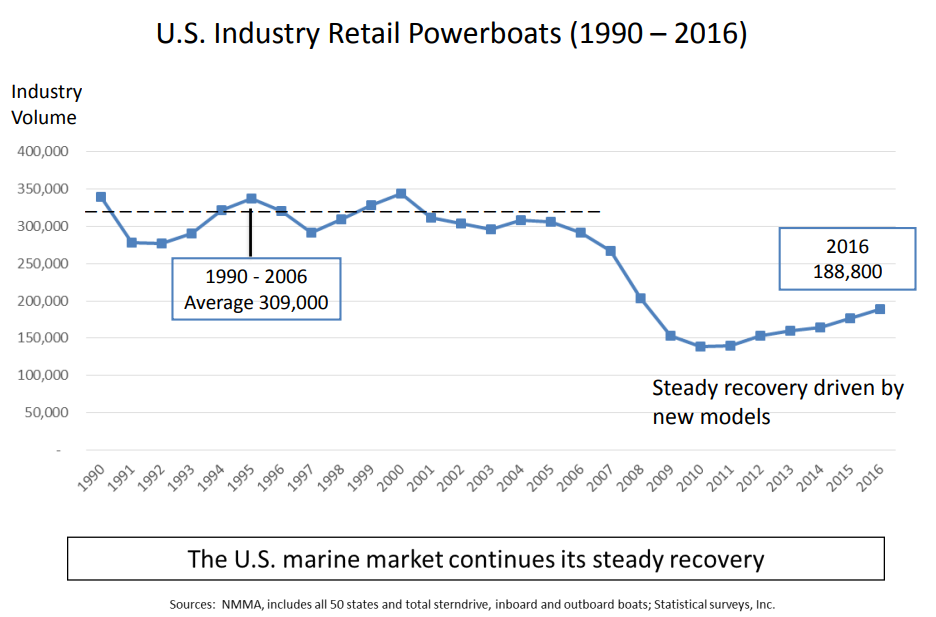 What this chart doesn’t show is that industry units have been in a secular decline in 1970 where units were trending at 500k per year (per conversation with CFO, I don’t have the data).  Since then each peak and bottom have been trending down. According to a study  of first time boat buyers shows that they are down 20% in 2015 since 2005 and the average age of buyers has meaningfully increased.  There is no shortage of speculation as to what is causing this from student loan debt, low wage growth, low homeownership rates etc. Other theories such as restrictive laws and the increased enforcement of them, such as boating DUIs also make intuitive since as well as the increased consumption of digital entertainment.  IMO the two biggest and most undiscussed driver are the rise of the sharing economy and the shift in discretionary spend toward experiences vs hard goods. Below is a chart illustrating the shift in recreation spending. 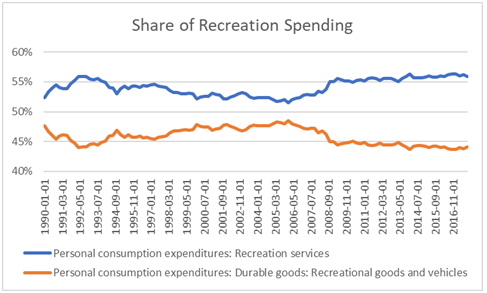 As mentioned above, the rise of the sharing economy is a growing trend likely to continue pressuring the industry.  Boat clubs have started to pop up about 5 years ago and are growing rapidly. One example is the Freedom Boat Clube franchise which now has over 165 franchises and company owned locations with 20,000 members growing 20-30% per year.  Members pay a 1x and ongoing monthly fee which on average result in annual costs of $3k to use a boat whenever you want and not worry about storage maintenance etc.

Where does this cycle peak?

This is the golden question.  There are about 9.5m boats currently registered and the average life is 30-35 years implying annual demand SHOULD be 270-315k units.  Current sales imply an annual rate of 210-215k so clearly some owners are choosing not to replace.

IMO boat clubs could be a meaningful headwind to reaching implied demand levels based on replacement.  Looking at how Uber/Lyft and Airbnb disrupted car ownership and hotels could be a useful guidepost. In urban areas uber has reportedly drove car ownership down by 10% and Airbnb has 18% of listings.  If using this average as a guidepost for disruption in the boat industry implies annual units peaking at ~235,000 units suggesting we are very late innings of this cycle. 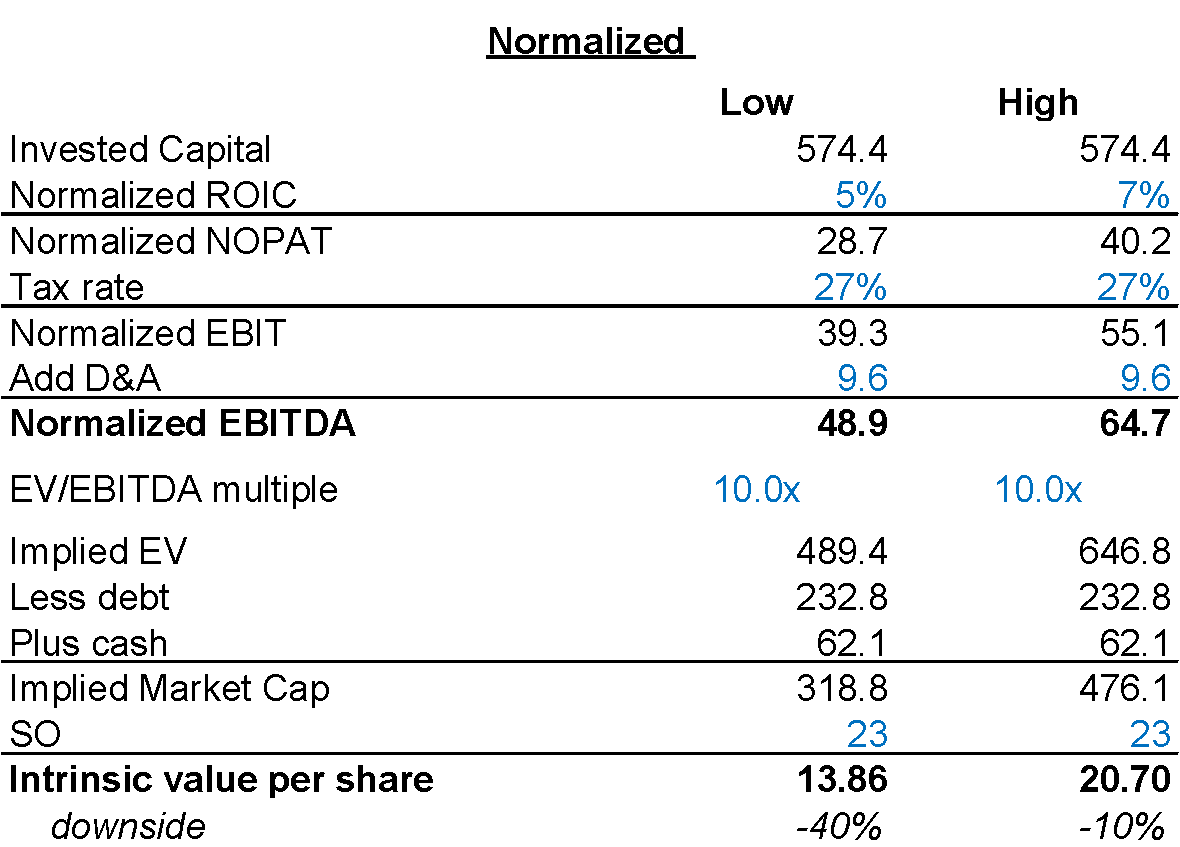 The downside scenerio uses a BV multiple as the company historically loses money in this scenerio.  The prior low P/TBV was 0.3x but I use a 0.7x for conservatism. 1.3x represents where the valuation bottomed in 2001.

The upside case uses 2020 and 2021 assuming current industry units grow MSD.  2021 represents 235k units which is what I think represents peak as discussed above.

Does owned real estate put a floor on the stock?

The short answer is historically it hasn’t.  MarineMax owns 28 of their locations out right and 19 of these locations are on waterfront properties.  However, per google maps, these properties are not close to urban areas, likely limiting development values and marinas historically don’t sell for much.  Additionally its owned real estate likely isn’t worth much more than book. The largest premium to book was in Q4’14 for 5x book, but the gain was only $1m ($0.04 per share after tax). The most recent sale I found was Q3’14 for 2x BV ($1.6m gain).  Management also talks down expectations here on its calls. Another way to look at this is rent expense which is about $200k per store so if capped at 8% implies $2.5m value on a marina which is in-line with recent marina sales I’ve seen. 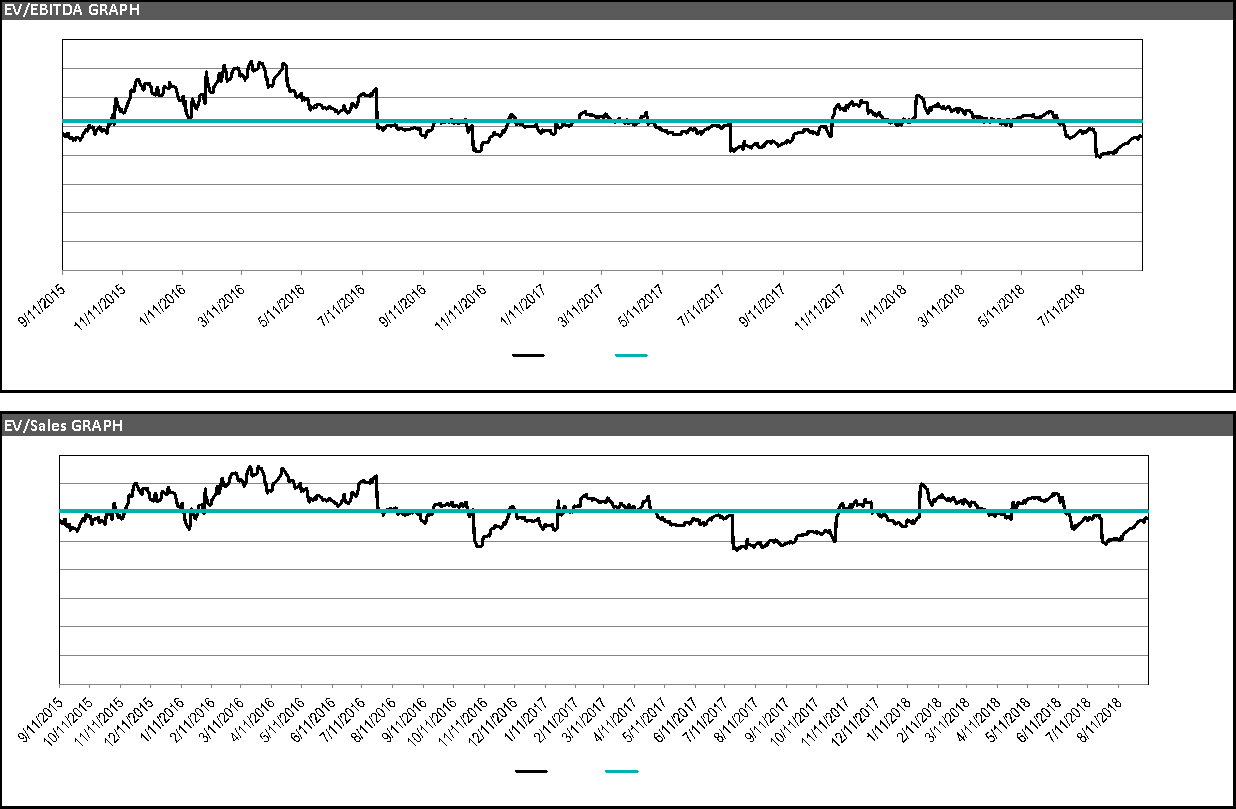 Are you sure you want to close this position MARINEMAX INC?

Are you sure you want to Flag this idea MARINEMAX INC for removal?