Recommendation: Long Oxy as the upside tied to their shift in capital returns post leverage target will start in 2022. Oxy’s capital return program is the last in the large cap oil & gas sector vs. peers that is early stages of ramping up.

Assuming strip pricing on the futures curve, OXY is worth $83/share based on an equally weighted average across EV/EBITDA, FCF, and DCF using current strip oil prices vs. a downside of $41/share, translating into a 1.7x R/R.

These factors obviously help energy stocks, but EOG and Pioneer have already played out as they have reached very little financial leverage. However, post the higher bid for the Anadarko acquisition, Oxy was over-levered. This put Oxy is a position to trail EOG/PXD as capital has flown into the space. As Oxy hits the sub 2x leverage point coming into 2023, their valuable and higher growth asset base (Larger % Intl + OxyChem + Carbon Credit Management) vs. EOG/PXD can result a premium re-rating given leverage isn’t a concern.

Pro-forma for the FY 22 debt paydown, Oxy could be on the path to $12/share in FCF or $11bn in FCF, pushing FCF yield close to 22%. Isolating oil prices via the hedged position, Oxy could retire the entire stock price in 3 years.

Oxy management has stated that they will return to “buybacks after they hit $25bn in net debt.” Oxy excludes the pref from its own Net Debt calculation given the 10-year non-call, even though I include it in my calculation.

As of 3Q, Oxy had $32bn in gross debt and $2bn in cash. In the 4Q, there should be another $2bn roughly of debt paydown, resulting in $28n net or $3bn in remaining debt paydown.

In FY 22, Oxy can generate $11bnbn in FCF, which reduces the $3bn paydown target and leaves $7bn for buyback potential in FY 22.

Now including the pref, Oxy will be levered $27.5bn in Net Debt vs. $20bn in consensus EBITDA, assuming all FCF goes to debt paydown resulting in actual net leverage less than 2x. Inside 2x leverage seems to be the magic number that the rating agencies are focused on as it brings Oxy in-line with its peer group in terms of net leverage.

An additional sweetener in the long-term is the BRK preferred that is costing Oxy 8% in annual interest vs. 4.75% cost to refi this expensive paper out. On a run-rate basis, given the $10bn size of the pref, Oxy can save $325mm in annual interest expense or boost FCF 33 cents per share. There is a $500mm or 5% premium to take out the paper, but that’s after 10 years.

Despite high oil prices, management teams in energy remain hesitant to be overly aggressive on growth capex instead favoring capital returns and debt paydown. The mindset change is critical as historically management teams in this sector deserved a large discount for their non-rational behavior.

With the expectation for rate hikes to battle inflation and value potentially outperforming growth, the under-owned nature of energy stocks sets up well for Oxy. As Oxy hits 2x leverage by the end of this year, the investor base available to invest in Oxy should growth.

WES makes up 15% of Oxy’s market cap (assuming no premium for the shares) and trades at 9x EBITDA on a stand-alone basis. With investors constantly skeptical of Vicki and management, Oxy should sell WES in order to reach $25bn net debt target.

In terms of valuation, deconsolidated WES is a below the line item that is worth about $5.5bn in EV across the 49% stake and the GP ownership. If we back out the $600mm of FCF in FY 22, we get to about $8bn in FCF or $8.50 in FCF per share. Monetizing the below the line midstream asset creates a “core” FCF yield closer to 31%.

Oxy should be able to provide additional color at the investor day regarding, CO2 net reduction potential, financing, partnerships and potential government support.

At a similar valuation to Iceland, OLCV could be worth $2 to $3bn ($2-3/share) if funded externally given path to commercial distribution. 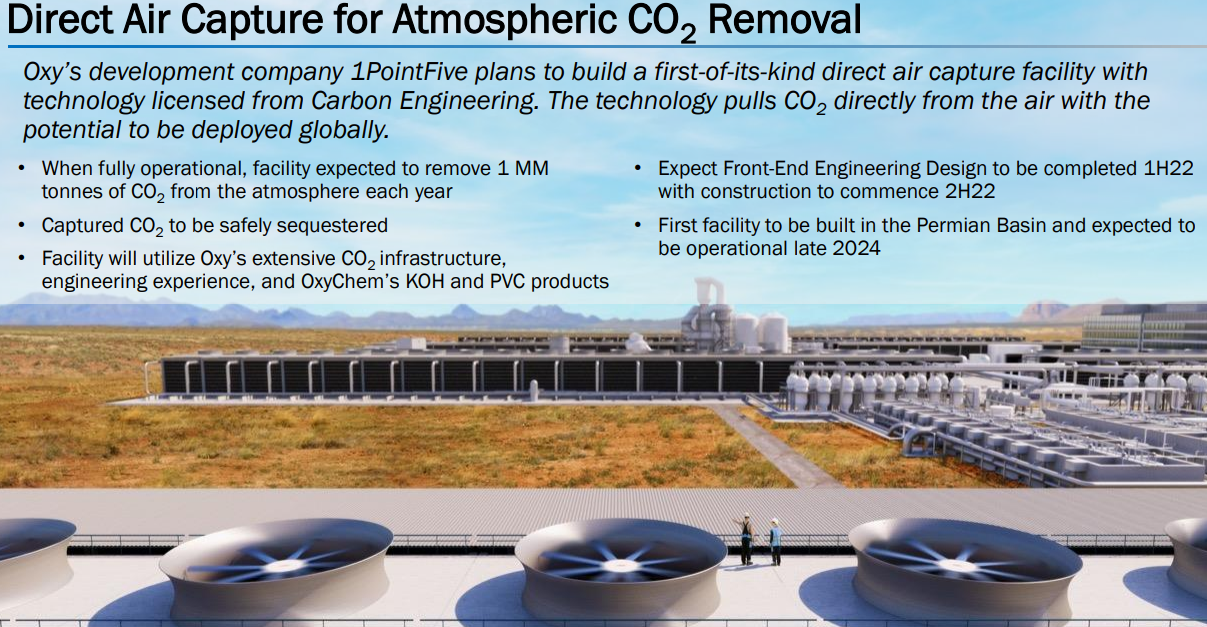