This is a fairly simple thesis, so will aim to keep this brief. At a high level, the market for buying and selling homes is stuck in an antiquated style of operations and will over time converge to the same modern models that exist in other financial markets - namely a progression toward lower fees, leading asymptotically toward zero, and quick, easy, intuitive digital offerings to buy and sell in those markets. What Robinhood is doing / has done to the trading of stocks will happen across most other financial markets, and will happen in the home buying industry. It is better, easier, and more convenient to buy and sell homes online, and this will be the dominant modality in the industry at some point in the future. Opendoor has assembled a superb team, and post its combination with Social Capital Hedosophia (IPOB) will also have ~$1.5bn of capital to boot. Opendoor is led by Eric Wu, who has spent his entire career in real estate, having founded several companies in the space. He has also rounded out the team with a slew of capital markets professionals and talented operators from other leading high-growth technology companies including Uber, Square, Netflix, Airbnb, etc. This team is well-poised to build a leading company in the homebuying industry.

Opendoor operates a digital homebuying platform online - it enables customers to buy and sell their homes with the click of a button, aiming to close the entire transaction in a matter of days. The crux of the bet on Opendoor is that this process is an order of magnitude better than the stressful process of selling a home through normal channels - namely spending months of effort, putting on open-houses, dealing with multiple bidders, negotiating the closing, etc. all while usually trying to find another place to live and generally undergoing the same process. Also, most people cannot afford to buy a new home until their old one has sold, which creates additional hassles and stress. Opendoor makes an instant offer for your home based on their proprietary pricing methodology. Generally this means they pay a mid single-digit discount to what their model says the home is worth - once you have the offer and accept, the transaction can close in 3 days - Opendoor sends its on-site investigators to review the home and then ticks and ties the remaining items and you are all set. The table below offers a comparison of the two options:

Essentially, Opendoor offers immediate liquidity for a slightly higher fee - essentially it is for those wanting peace of mind and certainty that the transaction will close expeditiously. While I have conviction a large portion of the homebuying market is willing to transact in this manner, I don’t think it’s important in the long-term as I will discuss below.

It might be helpful to first start by addressing common criticisms of the business, which I myself used to harbor before I learned more about the business and spoke to people with substantial experience in the industry. The number one criticism is Opendoor stands to lose a tremendous amount of money if they are not highly accurate in their pricing models - this is true, but they already leave themselves cushion by buying at a ~7% discount to their estimate of fair value - it’s worth keeping in mind that home prices move far more slowly than other financial assets like stocks - it’s not possible to have a 40% short-term range for a given home whereas for a stock, even a multi-billion dollar one, it’s quite common. Additionally, the other principal concern is Opendoor has never operated in a down market environment - Covid actually was a huge tailwind for the buying and selling of homes in non-urban environments where Opendoor principally operates (their typical market is a place like Phoenix with homes averaging $200-$300k). Regardless, this risk is mitigated by two things: 1) it seems unlikely we will ever again have a severa boom bust cycle in home prices as happened in the great recession 2) the speed at which Opendoor operates - generally unloading inventory in ~ 3 months - means they generally do not have too much exposure to home prices overall - additionally, home prices do not move quite so quickly - the entire home price correction in 2008 really took almost three years to play out. In fact, in a true volatile market, like any other market maker, Opendoor should be able to capitalize as long as they price things with enough of a discount. It’s no different from someone asking how you might price a large secondary block - you should still be able to make money as long as you price it properly.

Perhaps the most important part of the story is the future of the homebuying industry itself. In the very long run, I expect it will become a much more liquid market similar to many other modern financial markets - in fact, I doubt Opendoor will even need to act as a principal buyer or seller for the most part - over time Opendoor and others like them can operate more like a traditional marketplace operator - taking a small % fee of the transaction in exchange for operating the marketplace. The really intriguing part of the opportunity for Opendoor is if they succeed in processing a large market share of homebuying activity nationwide, the commercial opportunities for the highly profitable add-on services they can offer are truly massive. Think mortgages, title insurance, homeowners insurance, renovation services, lead gen for other services like moving, cable, security, etc. Opendoor is kickstarting the flywheel by first acting as a principal to start the market up, but over time this part of the business may go away entirely - the main thing important for Opendoor to be successful is that they end up gaining a substantial share of the homebuying market.

There is obviously competition - Zillow has essentially adopted Opendoor’s model despite initially being resistant - Zillow is a larger incumbent with more brand recognition and in theory valuation data on essentially all homes in the US. While this does position them well, they still have a few hurdles to overcome: 1) they lack the experience and data that Opendoor has in actually buying homes which is quite different from offering a simple valuation tool - your degree of specificity when actually transacting needs to be much higher. Also, Zillow may run into conflicts when trying to make bids that differ widely from the valuations they disclose on their site. Regardless, homebuying is a massive, fragmented market and it’s unlikely there will be just one winner - this is akin to how there are a number of large players in the U.S. exchange business, with some larger than others, but all of them are good businesses in and of themselves. Zillow copying the Opendoor model actually validates the model and ensures that it is more likely to become the dominant form of homebuying over time.

In terms of financials and valuation - it’s quite tricky to look at and value Opendoor using traditional metrics as 1) it’s a unique business model 2) the long-term profitability rests in selling high margin add-on services down the road. The company is targeting doing $50bn of revenues and a 5% EBITDA margin on those revenues. In terms of accounting, since Opendoor is operating as a principal in its transactions, the price of a home they buy is in COGS and revenue from the sale shows up as their revenue. So the margins appear much lower than they really are as Opendoor is really more of a marketplace with a put option they offer to sellers. If Opendoor successfully executes on the growth opportunities available to them in the markets they currently operate in, it should generate a 20+% IRR over the next 5-10 years.This assumes a target EBITDA multiple consistent with other marketplaces in the range of 10-20x and EBITDA of $2.5bn in the exit year.

Note: while the deal has not yet closed, the downside is somewhat protected to the $10 level as that is the cash redemption value in the SPAC transaction. 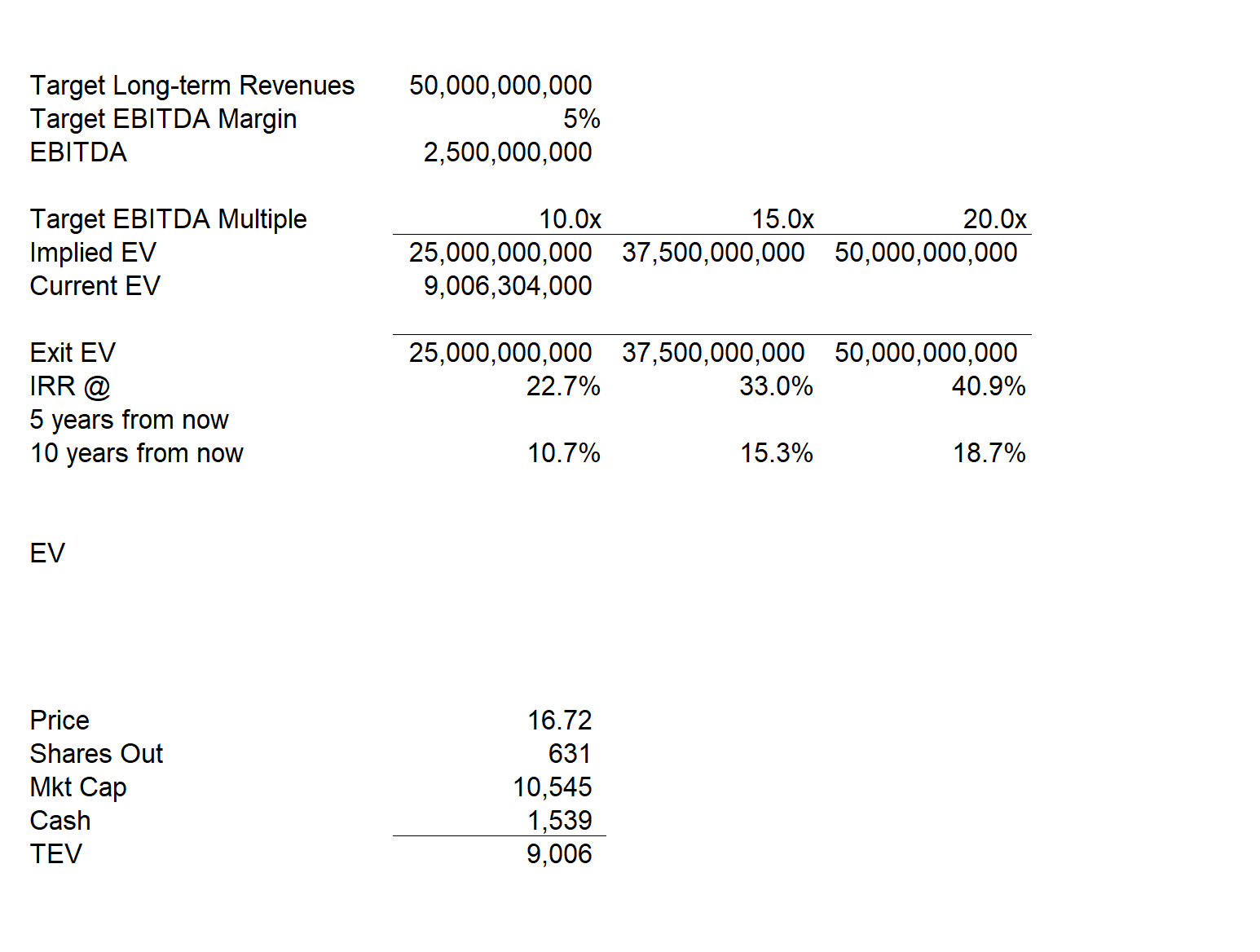 -investor discovery of the company and deeper understanding of the model

Are you sure you want to close this position Opendoor?

Are you sure you want to Flag this idea Opendoor for removal?