PolarityTE (COOL) is a $600 million market cap, low float stock promotion scam created by notorious Boca Raton stock promoters Barry Honig and Michael Brauser. COOL claims it is a “commercial stage” regenerative medicine company even though the company has no products that have ever been approved by the FDA, the company has never conducted a clinical trial, the company has never published research papers demonstrating its technology works, the company has no safety or efficacy data that proves its product is safe or works, and the company has de minimus revenues. COOL claims to have patented intellectual property but no patent has ever been awarded to COOL or its CEO Dr. Denver Lough. In fact any patent awarded to Dr. Lough would likely be rightfully owned by Southern Illinois and John Hopkins Universities, where Dr. Lough did the research that formed the basis for COOL’s patent applications prior to founding the entity that ultimately was reverse merged into COOL. With de minimus revenue, no proprietary intellectual property, and a roughly $10 million quarterly cash burn rate, we believe COOL shares have little intrinsic value beyond the company’s roughly $4.50/share in net cash. COOL shares are likely to be revalued down materially over the remainder of the year as over half of the company’s shares will exit lock-up agreements by October 9th. While COOL’s stock is relatively expensive to borrow, the stock does have a fairly liquid options market. We recommend buying put options.

On April 12, 2018 the company completed a public offering providing for the issuance and sale of 2,335,937 shares at an offering price of $16.00/share. Cantor Fitzgerald acted as the underwriter for this offering.

On June 7, 2018 the company completed an underwritten offering with Cantor Fitzgerald providing for the issuance and sale of 2,455,882 shares at an offering price of $23.65/share.Interestingly, Cantor’s research analyst cut his price target on the company from $70 to $65 five days after this offering was completed.

PolarityTE is a biotechnology and “regenerative biomaterials” company seeking to commercialize an alternative to traditional skin grafts called SkinTE. 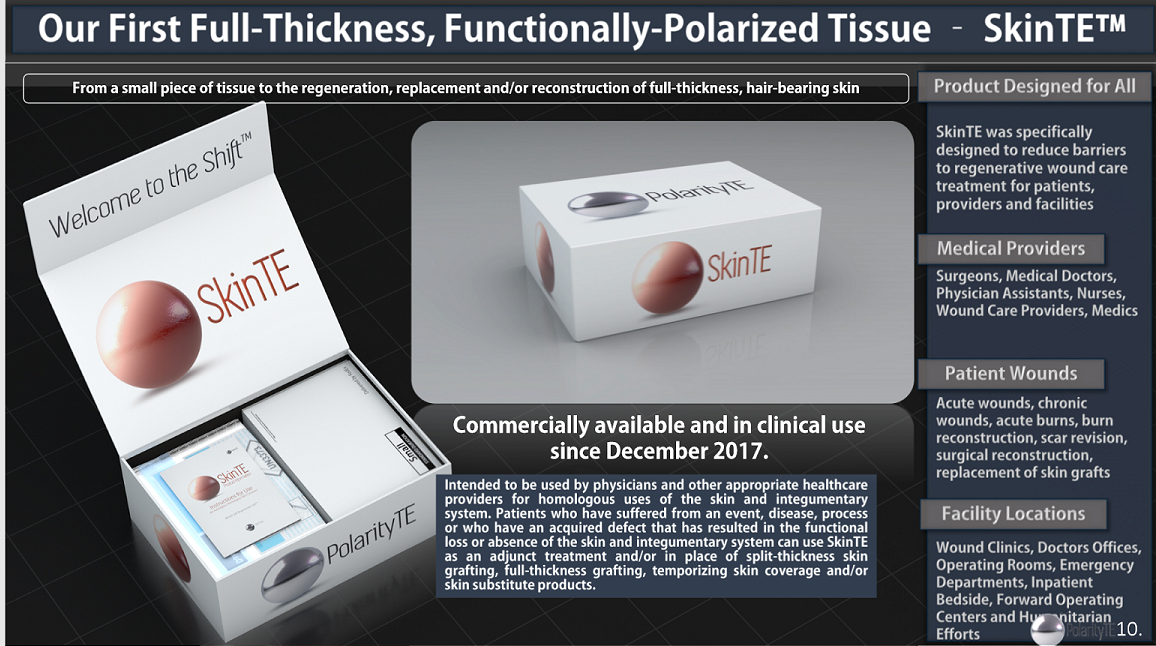 PolarityTE went public through a reverse merger of an entity called Polarity NV into Majesco, a publicly traded video game company controlled by Barry Honig. The reverse merger was announced in December 2016 and closed in April 2017. The gaming assets of Majesco were sold in June 2017. PolarityTE is headquartered in Salt Lake City, UT and has a small office in Hazlet, NJ.

In conjunction with the announcement of the reverse merger, COOL hired Dr. Denver Lough as its CEO and Dr. Edward “Ned” Swanson as its COO. Until their respective appointments, both doctors were associated with John Hopkins University as full time residents. According to the company on December 1, 2016, Dr. Lough assigned the patent application as well as all related intellectual property to PolarityTE Inc. On April 7th, 2017 the company issued preferred stock convertible into 7,050,000 shares of the company’s common stock to Dr. Lough for the purchase of Polarity NV’s assets. Dr. Lough’s shares were converted into common stock on March 6, 2018. Dr. Lough’s shares are under a lock-up that expires on October 9, 2018.

Conceptually, SkinTE begins with a small piece of the patient’s own healthy skin tissue. From this small piece of skin tissue, SkinTE tries to self propagate the sample in an effort to stimulate the patient’s own cells to regenerate the target tissues. The doctor takes the skin sample, sends it to PolarityTE and receives it back in a couple of days. The final product is a paste that is applied to wounds and burns.

You can watch a fancy Fox Business interview with Dr. Lough which explains the basics of the process here   https://www.youtube.com/watch?v=iPduIQ8gips

According to the company’s SEC filings, SkinTE is registered with the United States Food and Drug Administration (“FDA”) pursuant to the regulatory pathway for human cells, tissues, and cellular and tissue-based products (“HCT/Ps”) regulated solely under Section 361 of the Public Health Service Act (“361 HCT/Ps”), which permits qualifying products to be marketed without first obtaining FDA marketing authorization or approval, and is commercially available for the repair, reconstruction, replacement and regeneration of skin (i.e., homologous uses) for patients who have suffered from wounds, burns or injuries that require skin coverage over both small and large areas of their body.

It’s not abundantly clear that SkinTE qualifies for the Section 361 exemption. The SkinTE process outlined by COOL in its patent applications seems to be inconsistent with the FDA’s December 2017 guidance for the section 361 exemption (https://www.fda.gov/downloads/BiologicsBloodVaccines/GuidanceComplianceRegulatoryInformation/Guidances/CellularandGeneTherapy/UCM585403.pdf ). A series of seeking alpha posts by user “Research Noir” does a pretty good job outlining the reasons why SkinTE likely would not qualify for such an exemption.

The biggest bombshell from Research Noir’s articles is the disclosure of an FDA FOIA request that reveals that the FDA has never inspected or investigated PolarityTE.

According to the company’s SEC filings, the company began clinical trials of SkinTE in 2018 at “multiple centers” comparing the product to split-thickness skin grafts, the current standard of care. There is no evidence of such a clinical trial on clinicaltrials.gov.

In addition, COOL believes that its product has applications in the regrowth of skin, bone, cartilage, fat, muscle, blood vessels, neural elements, as well as solid and hollow organ composite tissue systems.

The company claims that it will be launching a new product called “OsteoTE” in late 2018. This product would in theory be able to regenerate bone. So far COOL has only completed preclinical validation studies for the product yet it claims that it will be commercializing the product later this year. Basically, the company has done some tests on some rabbits; this seems pretty far removed from having a product that is ready to be commercially sold to humans.

) of the rabbit x-rays included in slide 33 of the company’s current presentation ( https://d1io3yog0oux5.cloudfront.net/_df258990c899c5a921a08b47919775c3/polarityte/db/270/1647/pdf/PolarityTE_iDECK_7.13.18.pdf ) pointing out that they are almost certainly from different rabbits. Needless to say, x-rays from different rabbits would not be evidence that bone is being regenerated in one of the rabbits. 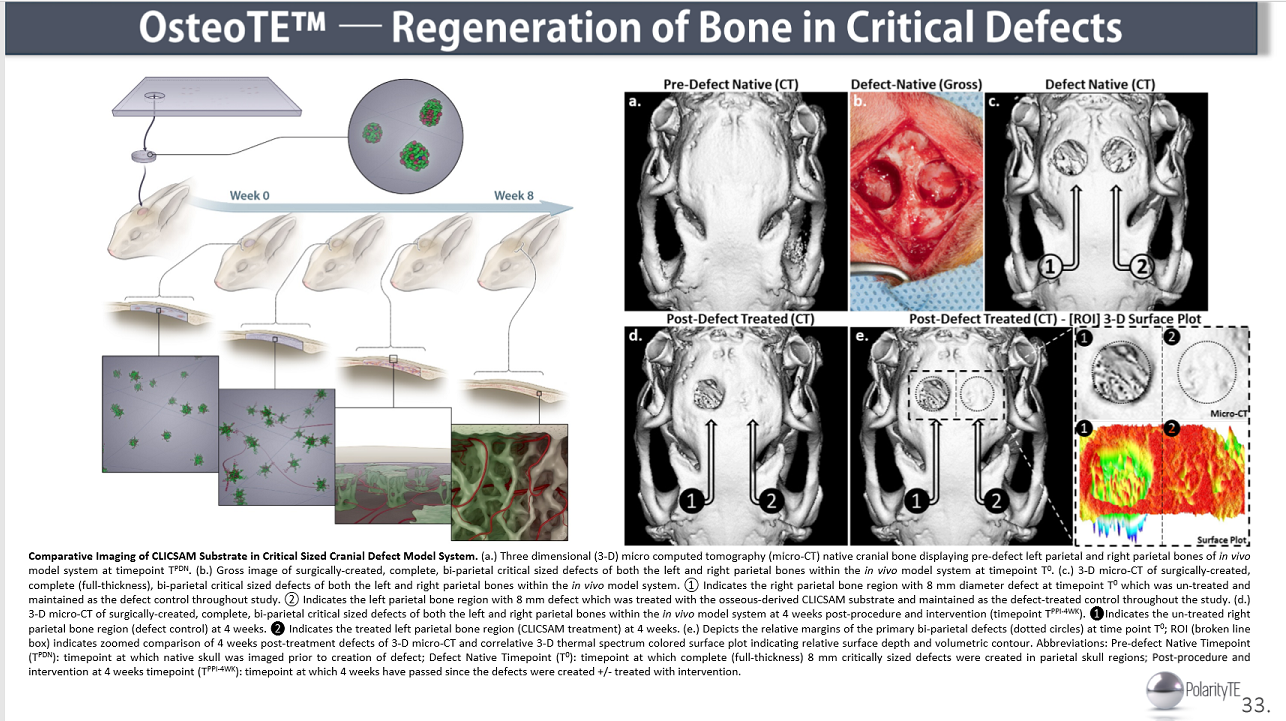 In 2018, PolarityTE applied for an HCPCS code for the SkinTE tissue product from CMS and according to the company’s recently filed 2017 annual report, it received a recommendation for a SkinTE specific product code to be initiated in January 2019.

On July 25th, the company issued a press release stating in part that SkinTE has “transitioned into Stage 2 of commercialization” and that “the company has begun generating revenues while improving the lives of patients.” The company indicated that “all hospitals, clinics, and practices that have completed their evaluations of the product have initiated purchase agreements with the company.” In addition, the company indicated that the company “continues to grow revenues and now expects to exceed both internal and Bloomberg consensus 3Q revenue estimates.” Given estimates for Q3 revenues were roughly $300k, this isn’t exactly a particularly meaningful disclosure as it would imply the company had roughly 40 patients in the July quarter (SkinTE is estimated to have a treatment cost of $7,300.)

On March 2nd 2018, PolarityTE acquired a Utah based pre-clinical GLP Contract Research Organization named Ibex Group LLC for $1.6 million in cash which has been renamed PolarityRD. PolarityRD, a service-based research and development arm seeks to improve, enhance, support, and drive forward promising research with customers, industry partners and academic institutions by leveraging the extraordinary human capital and equipment that PolarityTE has acquired since its inception. COOL has a subsidiary PolarityIS, a corporate development arm, which aims to seek out new and novel growth strategies involving M&A, licensure and partnerships related to PolarityTE technologies, products and services.

On June 20th, COOL hired Paul Mann as its CFO replacing John Stetson who was reassigned to become the company’s Chief Investment Officer and President of the company’s strategic development office. One wonders why a clinical stage “regenerative medicine” company needs a chief investment officer. Mr. Mann was a healthcare portfolio manager at Highbridge for about a year and a half after a 2.5 year stint as an analyst at Soros Fund Management, and a several year stint as a portfolio manager for Lodestone Natural Resources. Before Lodestone, Mr. Mann was a sell-side equity research analyst focusing on the chemicals sector for Morgan Stanley.  Note: Lodestone Natural Resources was shut down after two of its senior executives were arrested and charged with insider trading. (https://www.barrons.com/articles/BL-FUNDSB-12069 )

On June 25th, COOL hosted a key opinion leaders summit. In addition on that same day COOL was added to the Russell 2000 and Citron posted a short report on the company. The Citron report can be found here https://citronresearch.com/wp-content/uploads/2018/06/Citron-Exposes-History-of-FRAUD-Behind-PolarityTE.pdf

In the July 25th press release, the company included the following statement: “Despite the success observed with the initial roll out of SkinTE, there have been unsubstantiated rumors regarding the company and its lead product, SkinTE, by short sellers and competitors. While the company does not ordinarily comment on rumors and speculation, when these rumors start to affect SkinTE patients, their families, and their caregivers, we feel obligated to correct such misinformation. Individuals and/or groups on certain social media websites have recently engaged in deplorable attacks directed towards SkinTE patients and caregivers, and the Company condemns such disgusting and unacceptable bullying.

The Company is not a “fraud,” as known short sellers have claimed recently, and will not let these misrepresentations affect patients whose lives are at risk. There are many examples of patients whose lives have been positively affected by SkinTE, several of which were presented during the June 25, 2018 KOL summit in New York City.“

When companies feel the need to state that they are not a fraud, that usually is a pretty good sign that the company is not completely on the up and up.

Since the completion of the reverse merger into Majesco in April 2017 through the end of April 2018, PolarityTE has spent $19.3 million cumulatively on research and development. In that same time period the company spent roughly $30 million on general and administrative expenses.

While COOL has filed three patent applications to protect its intellectual property, to date none of these patents have been issued.

In the company’s 2017 annual report in the section on IP, the company states the following:

You can find links to each of these patent applications here:

Likewise, in a February 2017 correspondence with the SEC, COOL writes: “On December 1, 2016 we hired Dr. Denver Lough as Chief Executive Officer, Chief Scientific Officer and Chairman of our Board of Directors and Dr. Ned Swanson as Chief Operating Officer of the Company. Until their hiring both doctors were associated with Johns Hopkins University, Baltimore, Maryland, as full time residents.

The doctors lead the Company’s current efforts focused on scientific research and development and in this regard on December 1, 2016, the Company leased laboratory space and purchased laboratory equipment in Salt Lake City, Utah. Subsequent expenditures during January 2017 include $1.25 million for the purchase of microscopes for high end real-time imaging of cells and tissues required for tissue engineering and regenerative medicine research. The Company has added additional facilities, and established university and scientific relationships and collaborations in order to pursue its business. None of these activities were performed by Dr. Lough or Swanson prior to December 1, 2016 in connection with their university positions or privately.”

What makes this disclosure quite interesting is each of these patent applications were started in December 2014. Since Dr. Lough was an employee of John Hopkins at the time, if these patents were ever granted, the patent would likely end up being owned not by COOL but by John Hopkins.