Quorum Health Corporation (“NYSE: QHC”), which was recently spun out from parent Community Health Systems (“NYSE: CYH”) on April 29th, is a hospital management company comprised of 38 community hospitals located in non-urban areas in the US. QHC shares have sold off significantly post-spin with shares currently trading at $9.91 (down 33% from the spin-off price of $15) with a market cap of $295 million, net debt of $1.2 billion ($40 per share) and an EV of $1.5 billion ($50 per share).

The market has a negative perception of QHC given its portfolio of low margin, non-urban hospitals in areas bogged down by lagging economic growth and high leverage at around 4.5x 2016E EBITDA post spin after the incurrence of $1.3 billion of debt to pay a $1.2 billion special dividend to CYH. As a result, there was strong selling by CYH shareholders who didn’t want to own shares in <$300 million market cap company with a portfolio of hospitals that CYH was seemingly trying to get rid of. QHC is trading at around 5-6x 2016E EBITDA of $265 million (low end of management’s 2016E guidance of $265-275 million) with comps trading at a median EV/EBITDA multiple of around 7-8x.

Under the helm of a new management team and renewed focus on the portfolio, QHC is shaping up to be a classical spinoff opportunity with leveraged upside to a successful turnaround. QHC aims to follow the blueprint of other successful spinoffs of hospital portfolios in small cities/rural markets notably LifePoint Hospitals and Triad Hospitals which were both spun out of HCA and have performed well post-spin off in 1999. The sources of upside (not reflected in the current valuation) will come from (i) divestment of negative EBITDA hospitals, (ii) reinvestment in core hospitals to improve staffing and services, and (iii) deleveraging from free cash flows.

On August 3, 2015, CYH announced plans to spin off 38 hospitals and its hospital management advisory business into QHC. The spinoff was completed on April 29, 2016 through the distribution of 100% of QHC’s shares to CYH shareholders. CYH shareholders received one share of QHC for every 4 CYH shares resulting in a company with a much smaller market cap than CYH. QHC entered into a 5-year transitional services agreement with CYH to provide IT and administrative services of $5 million annually and QHC expects to incur an additional $3 million of costs annually as a standalone public company.

In connection with the spin-off, QHC issued $400 million in 11.625% senior notes due 2023 and entered signed a new $880 million senior secured term loan facility due 2022 in order to pay a $1.2 billion special dividend to CYH shareholders and fund working capital. QHC also has access to a $100 million senior secured revolving credit facility and a $125 million ABL facility which are currently undrawn and available for acquisitions.

Quorum Health Corporation (“QHC”) is an operator and manager of general acute care hospitals and outpatient services in the US. QHC has a portfolio of 38 hospitals (32 owned) with an aggregate of 3,582 licensed beds across 16 states. Its owned and leased hospitals generate revenues by providing generalized and specialized hospital healthcare services and other outpatient services to patients in local communities.

QHC’s portfolio is focused on rural areas (cities and counties with populations of 50,000 or less) and 84% of its hospitals are sole providers of care. 9 of the 16 states in which QHC operates have opted to expand Medicaid coverage with these states accounting for 73% of QHC’s revenues as shown below. 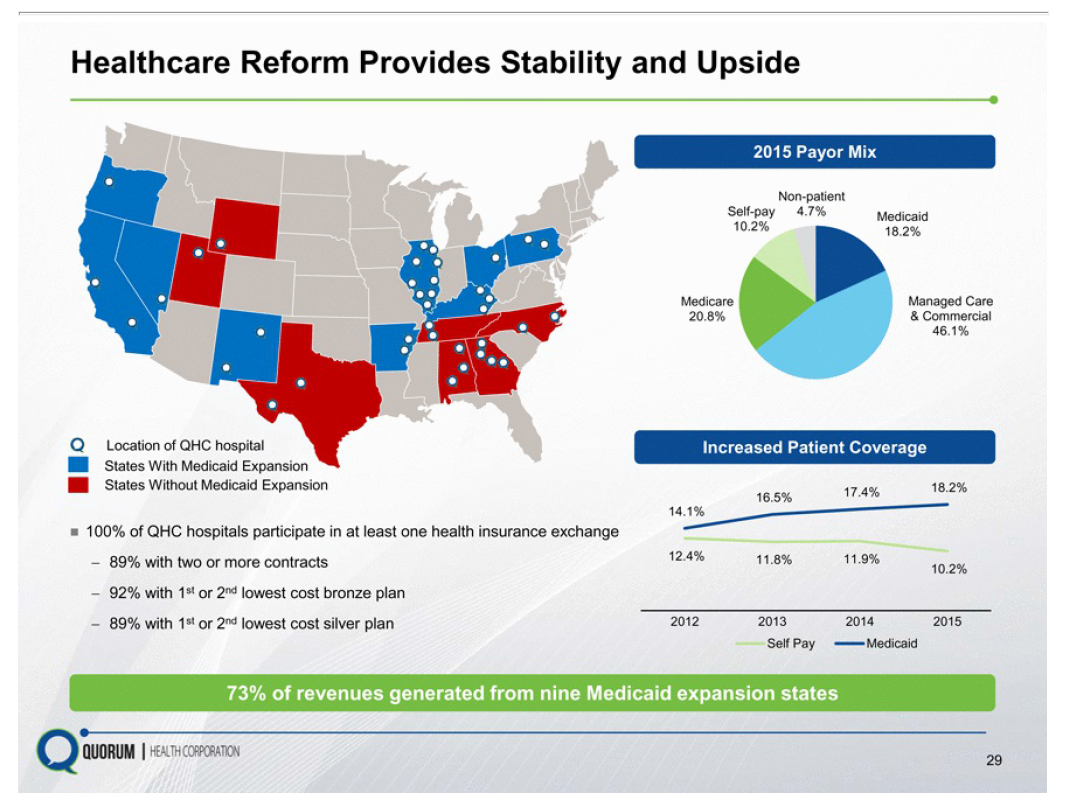 QHC was an underinvested, orphaned business under CYH ownership

With a focus on smaller hospitals in non-urban areas, most of which are sole providers, QHC was an orphaned business within CYH which operates 194 hospitals in 28 states and is strategically focused on larger hospitals and regional networks. QHC hospitals generated EBITDA of $264 million in 2015 against CYH’s EBITDA of $2,670 million or roughly 10% of the total combined CYH/QHC. It also took CYH around 6 months to finalise the spinoff of QHC during which all QHC-related capex was stopped and recruitment was stalled at QHC’s hospitals.

The strategies for driving better operational performance at large vs. small community anchored hospitals differ significantly and the spin-off will allow QHC’s management to focus on levers that will improve the operational and financial performance of its hospitals. Specifically, QHC plans to increase physician engagement and recruiting efforts and to expand the breadth of its services beyond primary care which is expected to drive further volumes to its hospitals – currently QHC is experiencing outmigration in its emergency rooms due to lack of staff and resources so there is underlying demand.

QHC management is following the playbook for similar spinoffs

Other hospital spinoffs (LifePoint, Triad) have successfully turned around their rural/small cities hospital portfolios through divestments and focus on their core assets. LifePoint and Triad were able to take EBITDA margins to 19% and 14%, respectively in the year following the spin-off in 1999. Comparatively, QHC delivered adjusted EBITDA margins of 12% in 2015 with healthy EBITDA margins for the profitable hospitals.

The current CFO, Michael Culotta brings 30+ years of industry experience having previously served as CFO of LifePoint Hospitals from 2001-2003 and 2007-2013 which provides some comfort in the new management’s ability to execute a similar playbook.