A value unlocking event is likely coming up that should result in between 80%-270% gains in 12-24 months. Royalty income should get disclosed allowing for 50%+ upside within next month. Scully Royalty identifies as a merchant bank but used to be best described as a nano-cap conglomerate value trap.

The company’s name has been changed to reflect its most important asset and the business lines segmented in three distinct categories. The CEO has historically used spin-offs and spin-outs to unlock value and expressed a desire to decrease the gap between book value and market value. The company trades at 0.36x book value. This leads me to expect a spin-off or spin-out somewhere in 2020-2022.

I’m going to make this investment thesis very simple by focusing only on the re-opening of the Tacora Resources Scully iron ore mine in the Labrador Trough in Western Labrador. Scully Royalty a 7% royalty on that mine but this is currently not reflected on its income statement because the company has not yet received its first royalty payment since the mine has been running.

In this write-up I’ll disregard all other assets by the company. In the last few years the other assets have been loss making and a turnaround within the merchant bank is underway. If not for another round of credit writedowns the merchant bank would have been profitable. But in this extremely conservative write-up I’m ascribing zero value to the other values including real estate, power plants and Canadian oil and gas assets.

Last year I wrote this company up too but there’s a key difference in that today the mine is now up-and-running and the share price has almost round tripped back to the same low level.

Scully Royalty is in a much better fundamental position with most of the uncertainty removed. I’m going to show a few charts because these illustrate why and how it is still mispriced. Here’s how this stock traded over the last five years. 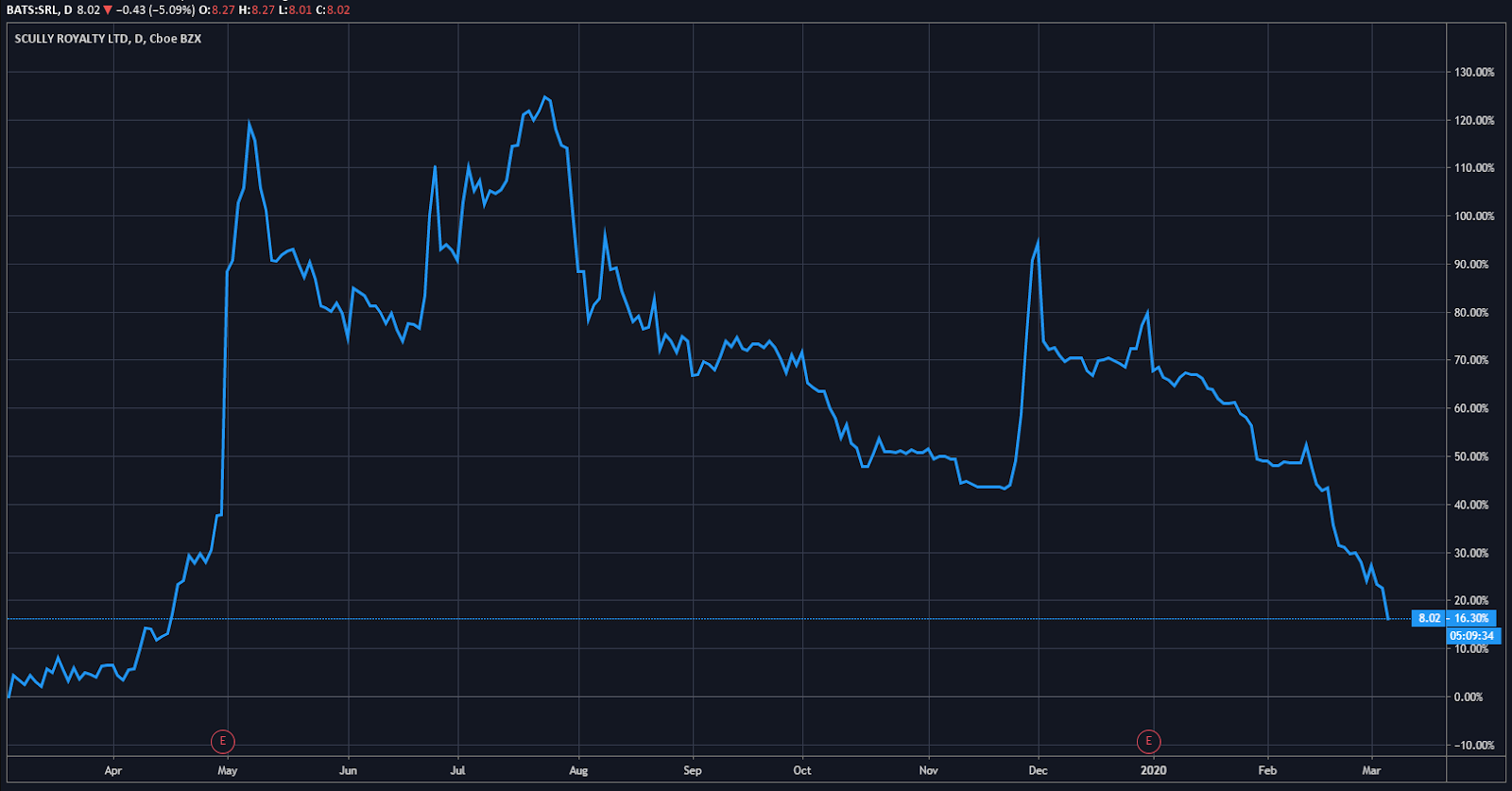 Zero value was attributed to the Scully Royalty at the time of my write-up last year but when the company revalued the royalty in May and announced a potential name change from MFC Bancorp to Scully Royalty the market instantly re-rated it.

Interestingly is that ever since that announcement the stock started trading like an iron ore miner.

The chart below shows the share price over the past five years and doesn’t show high correlation with iron ore in orange: 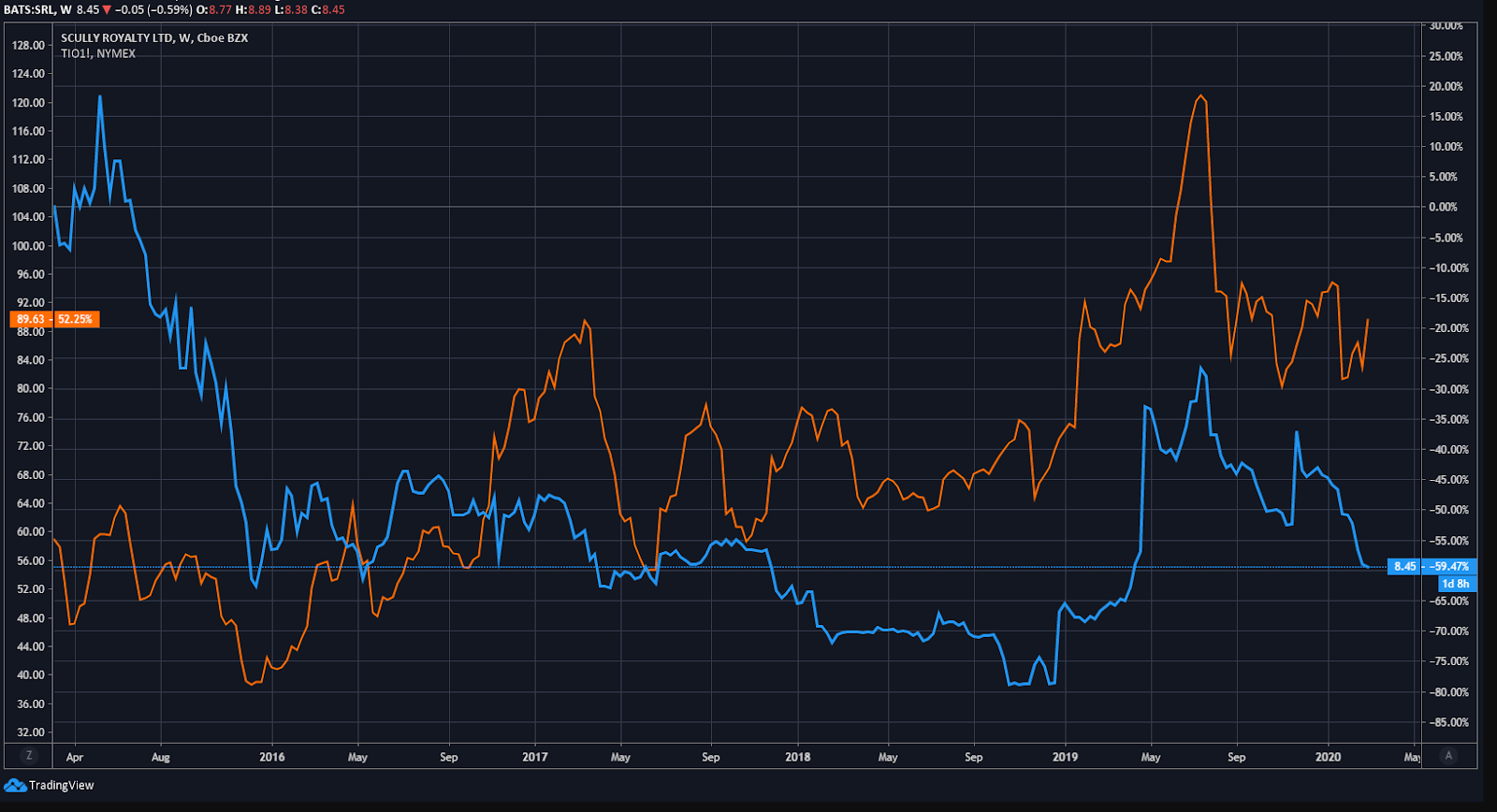 But after May that changed and it shows a high correlation with the iron ore price in orange: 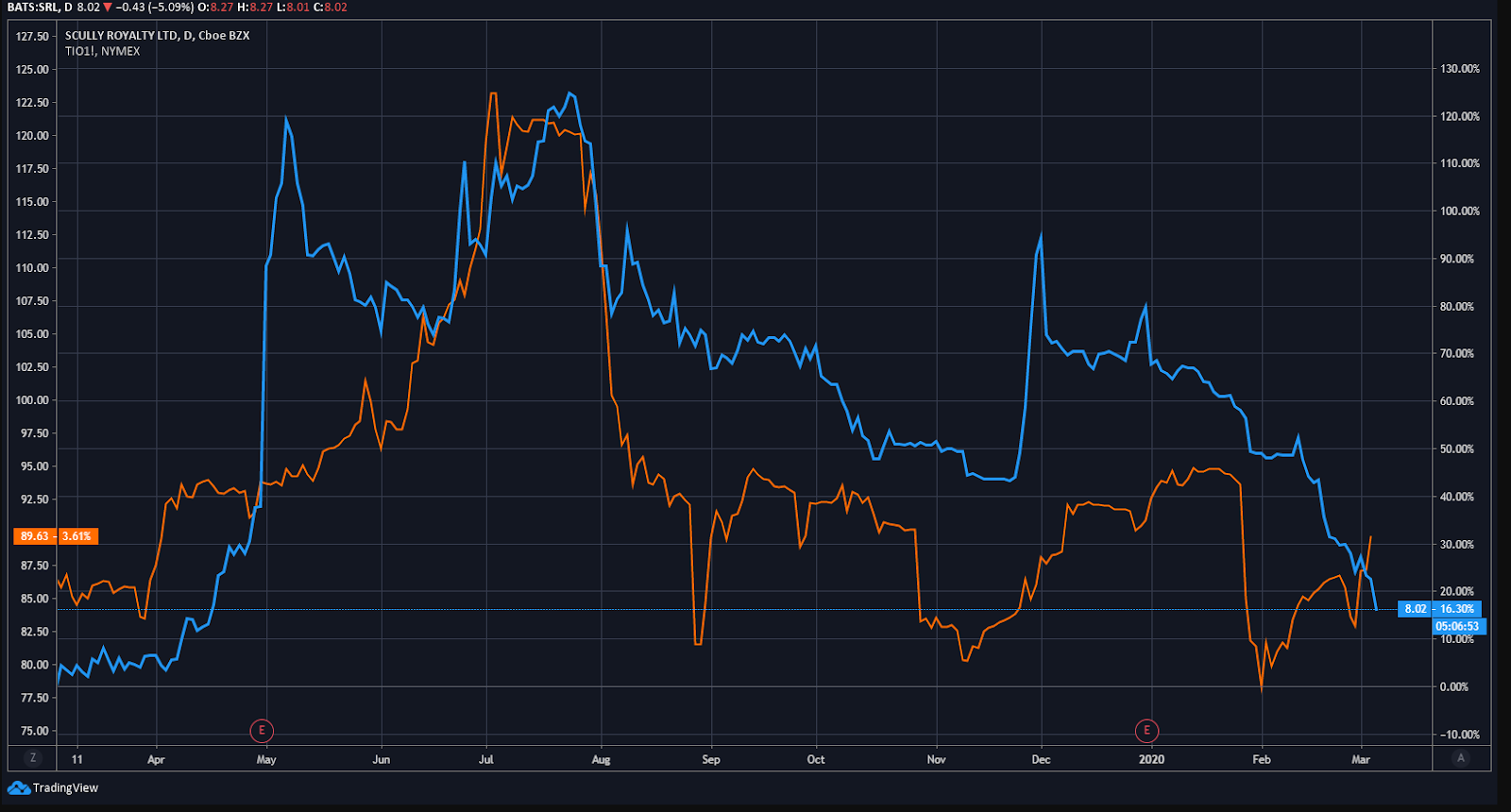 Iron Ore companies I looked at trade highly correlated. An exception is Vale but that’s a company that went through a period of company specific problems. 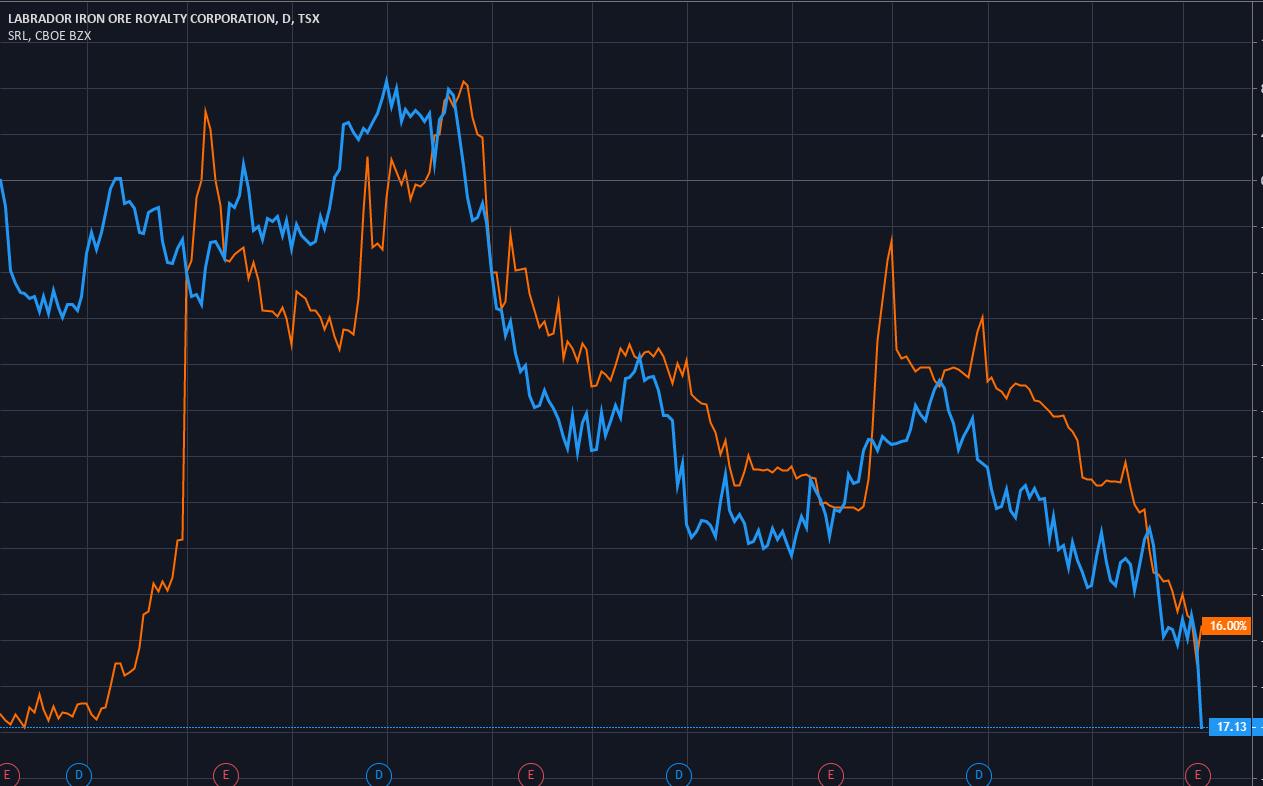 It is almost as if the company has been reclassified by quants into the right category and is now traded like a regular iron ore miner. That's a big improvement but there's no attention being paid to what earnings are actually going to look like on a look through basis. After all, the current income statement does not reflect future iron ore royalties at all.

The most important thing here is the forward value of a royalty on a mine that is potentially producing up to 6.5 million tons of iron per annum iron ore grade of 65.9%. It is a very high-quality product that commands a premium in the market. The premium is variable. It's currently around 10%. It is driven by environmental concerns which puts a secular tailwind at its back.

Here is a peer group of base metal royalty companies and you’ll see that a 8x EV/EBITDA multiple is a reasonable way to value an asset like this. In my opinion many of the companies below are currently undervalued although not to the same degree:

Scully Royalty trades at a $100 million market cap. At a minimum there is 85% upside here and a 271% gain upside scenario is not hard to imagine. But that’s counting only the isolated value of the royalty stream. The net cash on the balance sheet disregarded or that the company was valued at around $60 million without the royalty.

China is a key player in iron ore demand. I can see reduced demand hurting the price in the near term even with some Brazilian capacity shut down. Because it is a royalty price changes are not amplified to the extent they are for operators. As long as prices remain high enough for the Scully mine to be operated the re-rate story should remain intact.

There is no debt on the balance that can bring the company down prematurely.

Before the Scully mine reopening the stock traded around $6 and for a brief period has traded down to $4. Even if Tacora resources fails because the iron market goes into a prolonged downturn Scully Royalty is likely to make $10 million+ in royalty fees. With the merchant bank more or less stabilized I think the $4 floor should hold in the long term even if the royalty is ultimately disregarded once more. If I only look at forward cash and subtract all liabilities and recognize no other assets there should still be around $2.6 in net value.

With value traps the problem is often that value is slowly eroding but the opposite is true here. Every quarter, from here, the company is getting richer whether iron ore is high or low, the balance sheet is getting filled up with cash. Because the balance sheet is very strong with a net cash position I think this is an ideal opportunity unlocked by the current market turmoil that is easy to hold throughout possible further market turmoil.

The company is likely reporting earnings again near the end of March. Royalty earnings become visible to the market and I expect a 50%+ gain over the next month. Perhaps there will be progress on the spin-off front as well. As the mine fully ramps up and financial reports continue to reflect the new economic reality the company should fully rerate.

Are you sure you want to close this position SCULLY ROYALTY LTD?

Are you sure you want to Flag this idea SCULLY ROYALTY LTD for removal?