Signature Group is an NOL shell that recently acquired the leading aluminum recycling business in the United States. The valuation is compelling at approximately 6.9 times LTM EBITDA, with additional upside to come from margin expansion as the company returns to more attractive price and utilization levels. Within a year, EBITDA should increase from $84mm LTM to between $100mm to $125mm, putting the EV/EBITDA multiple below 5. The company should generate $1.35 to $1.50 per share in net income at that EBITDA level, which means that the company can be purchased today for a PE of 5.

Thanks to its long duration NOLs — generated when Signature Group was the old subprime lender Fremont General — SGRH will not pay income taxes for many years, far beyond the holding period of almost any investor who purchases stock today. The NOLs will have additional value if the company uses their Real Alloy recycling business as a platform to consolidate the dozens of small, subscale players in the aluminum recycling business.

From Fremont to Signature

Fremont General was one of the worst abusers of the subprime era. The company succumbed earlier than most other banks, filing for Chapter 11 protection in June 2008. Emerging from bankruptcy in 2010, the company was renamed Signature Group and sought to build a business in mid market commercial lending. Soon after, the company became subject of a proxy fight led by Craig Bouchard, the founder of steel company Esmark. Bouchard, with minority backing from Sam Zell, took control of the company in 2013. He sought to acquire stable industrial companies whose long duration cash flows could fully use the $1 billion of NOLs owned by Signature. Bouchard made offers but was outbid on numerous occasions before purchasing the aluminum recycling business.

Finally, in late 2014, Bouchard got his prize — a signed deal to acquire the Global Recycling and Specialty Alloy (GRSA) division of aluminum company Aleris, a company owned by Oaktree, Apollo, and Sankaty. Aleris, created through a series of mergers from 2004 to 2007, is a leading downstream fabricator of aluminum. The company was acquired by TPG in 2006 for $3.3 billion and filed for bankruptcy under its debt load in 2009, transferring ownership to the creditor group headed by Oaktree. The GRSA division, despite being the largest steel recycling business in the world with over 50% market share, was a small part of Aleris, at just 35% of consolidated revenue in 2013. Selling this division to Signature Group was an attractive option for the investor group led by Oaktree, allowing them to book returns of capital and IRR for their limited duration funds before the rest of Aleris was ready to be IPOd or sold.

As a material, aluminum is growing due to a large aerospace order book and due to taking share from steel in the automobile industry, where weight reduction is the best way to meet ever tougher fuel economy standards. I will omit the details of the well-known aluminum substitution story here, here but you can read VIC reports on any other aluminum company for further background.

More importantly for Signature Group, recycled aluminum is taking share from primary aluminum production every year, in a process almost exactly parallel to the long shift in market share from primary blast furnace steel to recycled steel produced in an electric arc furnace. The process is slow — with about 10% of share shifting from primary to secondary over twenty years — but it is against a growing denominator and the shift is nearly inexorable, driven by the energy cost advantage enjoyed by recycled aluminum. In developed markets like North America and Europe, this process is further along than it is globally. 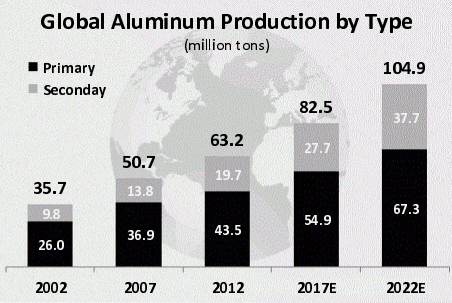 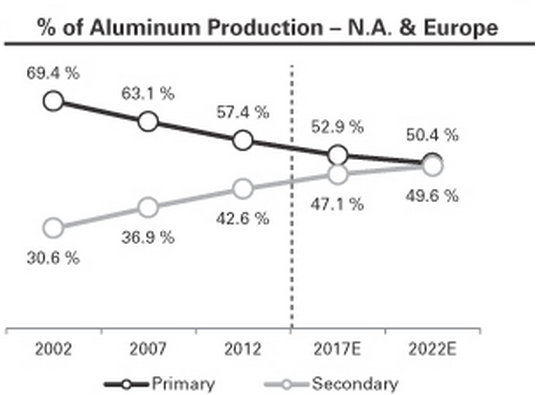 Signature Group announced its acquisition of the GRSA unit (henceforth, Real Alloy) of Aleris in October 2014. Total consideration was $525 million, or 6.25x TTM EBITDA. The company has funded this acquisition with the following sources:

With the rights offering completed, the company’s enterprise value consists of:

$25 million of Series B Preferred stock

LTM through 9/30/14, EBITDA was $84 million. EBITDA per ton in the American division was $75, down from a recent high of $90 in in 2011. In the European division, EBITDA per ton was just $58, off the 2011 high of $91. Capacity utilization at Real Alloy was 71% in 2013 according to disclosures in Aleris filings, implying total capacity of 1.728 million tons. Interestingly, Signature Group reports a higher number, 1.9 million tons, as the capacity of Real Alloy today. Either way, the company is operating around 70% of capacity utilization today, implying the opportunity for significant growth before expansion capex will be needed. 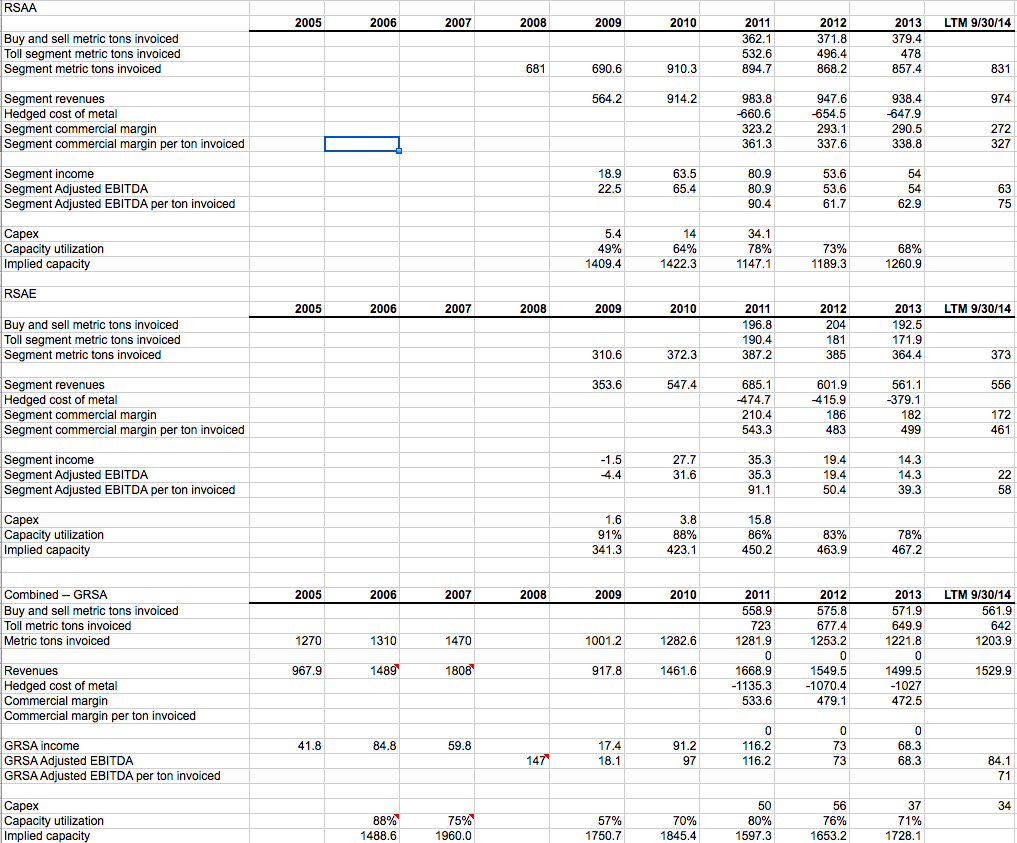 Increased demand from China for scrap aluminum drove down margins for Real Alloy from 2011 to 2013. The Chinese demand increased scrap prices without meaningfully affecting the price of the aluminum outputs from Real Alloy, compressing the company’s margins. Starting in 2013, as part of the country’s wonderfully named “Operation Green Fence,” China began restricting imports of solid waste material with certain contaminants. Real Alloy, as described below, is specifically equipped to process the kinds of materials now restricted by China, giving the company margin relief that’s additive to what the industry as whole has experienced from the new policy out of China.

Under Aleris, Real Alloy upgraded many of its facilities with modern shredders, dryers, and mills to enable the plants to process the widest variety of input materials possible. These pre-processing investments, similar to upgrades at an oil refinery to enable it to process heavy sour crude, should continue to drive margins higher over time. Real Alloy reports that it has increased its pre-processing capacity by 56% since 2011. Additionally, the company has invested $20 million since then in its melting facilities. Twelve of the company’s facilities have the capacity to deliver metal to customers in molten form, and 40% of the company’s total output is molten metal. Driving this share higher reduces costs for customers, incentivizes renewals, and increases margins.

It is possible that Operation Green Fence, the pre-processing investment, and the growing share of molten deliveries, could allow Real Alloy to generate higher per-ton margins than the company’s peak levels in 2011. However, our forecasts do not rely on that to happen.

The company’s customers are blue chip industrial companies. The largest customers are other aluminum fabricators like Alcoa, Kaiser, Aleris, and Novelis. Major automakers are the other important category. Real Alloy ships to Chrysler, GM, Honda, Daimler, and Volkswagen. The company should be able to take share starting in 2015 with other aluminum fabricators now that they are no longer associated with Aleris, which is a major competitor to companies like Novelis and Constellium.

Craig Bouchard founded Esmark in 2004. The company went public at $0.25 per share and grew through a series of acquisitions. Bouchard sold the company to Severstal for $19.25 per share, making the company the best-performing stock on the NASDAQ over that period. In 2010, he founded Shale-Inland, a distributor of oil country tubular goods and other products for the energy industry. Revenue at that company approaches $1 billion, though it’s privately held so we do not have full financials for it.

The senior management of Real Alloy, who maintained positive EBITDA throughout the recession and have led the plant modernization in recent years, will continue with the company as ownership transitions to Signature.

That said, there is a clear opportunity for further industry consolidation, led by Signature Group. Antitrust will not be a concern, because recycled aluminum competes directly against aluminum from primary production, and the giants of that world dwarf Real Alloy. The company also has the opportunity to consolidate its industry outside of its base in North America and Europe. 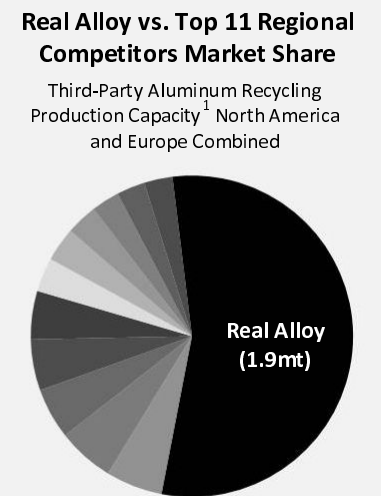 To value Signature Group today, we can make a simple model of the LTM financials of Real Alloy and apply them to the current capital structure, along with volume and margin forecasts.

The model assumes the following:

The company’s operations and capital structure are fairly simple, so the risk factors are what you would expect for a mature industrial company:

Are you sure you want to close this position SIGNATURE GROUP HOLDINGS INC?

Are you sure you want to Flag this idea SIGNATURE GROUP HOLDINGS INC for removal?