Established in 1980 and based out of Perth, Scotland, in the U.K., Stagecoach Group plc (LSE: SGC) owns a collection of public transport businesses. The Company operates a best-in-class transport franchise in the U.K. where it is the largest of five service providers that collectively control 80% of a mostly deregulated regional bus transportation network. SGC also operates buses in London (a regulated market) and has a substantial footprint in North America where the group owns Coach USA, Coach Canada and a budget intercity coach service called Megabus. Lastly, the group also operates a portfolio of UK rail franchises both directly and indirectly through a joint venture with the Virgin Group.

After Maggie Thatcher’s deregulation of the bus network in 1985, and subsequent rail privatization in 1996, the company has grown both organically and through acquisitions to become U.K.’s dominant regional bus player and its second largest rail operator. The Company’s Chairman, Sir Brian Souter, and co-founder/sibling, Ann Heron Gloag, still own more than 26% of the shares outstanding. SGC strives to maintain an entrepreneurial culture, reflecting its family heritage and operates through four separate business divisions (segments) each of which is led by a Managing Director. Using a decentralized structure, segments that operate in deregulated markets are afforded a lot of autonomy to make local business decisions (adjusting pricing, schedules, timetables etc.), but through short chains of command the center closely monitors all business activities. Philosophically, SGC is reputed to have taken Walmart’s approach to running a business to heart – “every-day low pricing” while striving to run a tight ship. Like Walmart, margins are thin and to succeed requires diligent blocking and tackling day in and day out.

It is worth noting that while the Company does publish financial results semi-annually, it does not hold any earnings teleconferences and/or publish analyst or earnings meeting transcripts. In addition to the semi-annual results, the company does publish two interim trading updates during the fiscal year which ends on April 30. A Jefferies sell-side analyst I spoke to indicated that management is old-school and, as such, if investors do not show up to results briefings that are held on-site, they stand to lose out on the additional color that management provides. I take this to mean that investors have to rely on the sell-side analysts a bit more than is usually the case.

In 2010, Deutsche Bahn acquired Arriva (another UK-based regional passenger transport provider and a competitor) at take-out multiple of 7.4X EBITDA. See table below:

Arguably, SGC, which is considered to be one of the best run transport franchises in the U.K., ought to garner a higher transaction multiple. In my view, the take-out multiple for Arriva PLC should serve as a floor on the value of this franchise.

2. The reported pension deficit at 10/28/17 was £57.8m. This Pro Forma figure assumes a market correction of ~ 25% which causes the net pension liability to increase.

3. Although the nature of the business is such that it normally operates with negative working capital, to be conservative, in the calculation above, the W/C deficit reported as of 10/28/17 is included in liabilities.

Stagecoach operates through four reporting segments. The chart below provides a high level summary of revenue and operating profits by segment for FY2016 (ending in April 2017):

The asset intensity of the four operating segments vary. The U.K. Regional Bus and North America segments are the most asset intensive. The U.K. London Bus segment and the U.K. Rail business, on the other hand, are asset light.

The UK Bus (regional operations) Division connects communities in more than 100 towns and cities across the UK on bus networks stretching from the Highlands of Scotland to south west England. These include major city bus operations in Liverpool, Newcastle, Hull, Manchester, Oxford, Sheffield, Cambridge and Exeter.

The regional market in Great Britain (outside London) was deregulated in 1985. Anyone who holds a Public Service Vehicle (PSV) operators’ license may operate a commercial bus service upon registering and obtaining approval from the relevant traffic commissioner’s office. However, over time, the industry has consolidated and five companies control 80% of the regional market in the UK. Four of these are publicly listed on the London stock exchange (Stagecoach Group, FirstGroup, National Express Group, Go-Ahead Group) and the fifth, Arriva, which used to be publicly listed, is now owned by Deutsche Bahn (German Government). Stagecoach is the largest regional operator in the UK and enjoys a 23% market share. This segment is a steady driver of Group profits.

With the UK Economy under stress, in recent years, financial support from the Government has come under pressure. This flows through as curtailments in Bus Service Operator’s Grant (BSOG) – essentially a rebate of fuel tax; cut-back on subsidies for senior citizens or those with disabilities; lastly, local governments have also reduced funding for tendered services. In light of these developments, both industry and SGC’s revenue mix is expected to increasingly shift towards paying passengers.

In 2012, SGC acquired a subset of Coach USA’s business and at the time, paid $134.2m to acquire $164.4m in revenues and $24.6m in EBITDA. The transaction multiples work out to 0.82x sales and 5.45x EBITDA. The rationale for the acquisition was to expand scale and geographical diversification while supporting a controlled expansion of the megabus.com brand within the North American division. For those on a tight budget, Megabus.com offers compelling value for inter-city travel within North America. Some fares can be as low as $1. 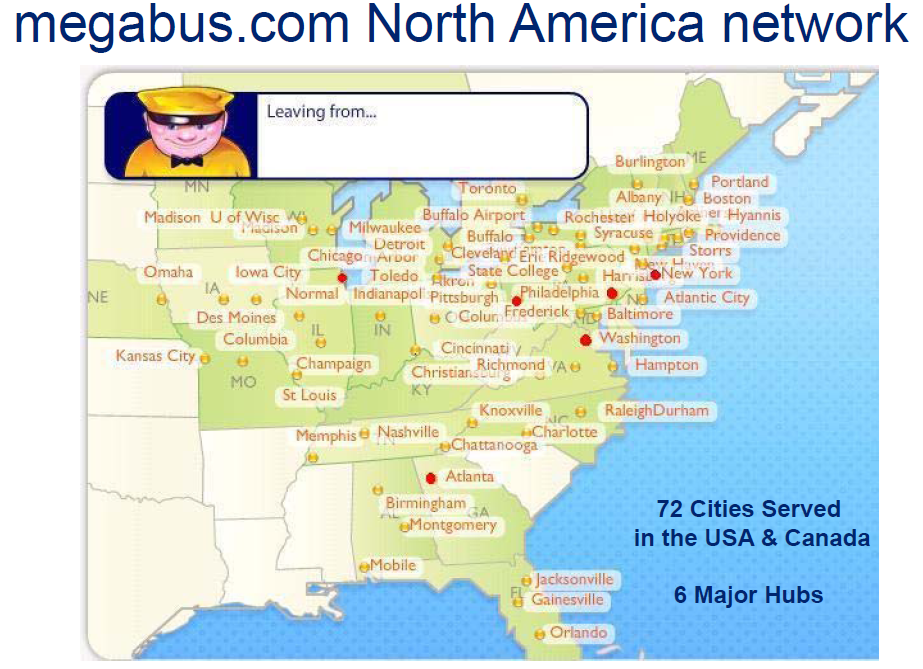 In US dollar terms, over the past decade, like-for-like sales have grown at a 3.3% CAGR. On a reported basis (in £’s), sales have grown at a 7.3% CAGR and EBITDA has grown at a 6.5% CAGR. Until recently, Megabus.com was a fast growing business that generated above average margins for the segment. Lately, with the drop in oil prices, an increasing number of customers are opting for private car or air travel which in turn is pressuring revenues and business mix. Note that segment EBIT contribution is down -25% since 2014.

In October 2010, SGC entered the London bus market through the acquisition of the bus business formerly owned by East London Bus Group Limited which was in receivership at the time. Today, the Company is the fourth largest operator in the London bus market, with an estimated 15% share of this market. SGC operates from nine depots and has a fleet of 1,300 buses serving routes in east and south-east London. Transport for London (TfL) – a Government agency – awards contracts to bus operators and each contract is typically for a five-year period with potential for a two year extension. In this regulated market, SGC has over eighty separate contracts to provide bus transport services on behalf of TfL. The staggered expiration on contracts reduces financial risk for the segment. However, these service contracts are operated on a fixed-fee basis (subject to annual inflation adjustment) and the Company bears risk on costs and capital deployed. To be successful, SGC focuses on tightly managing costs and being disciplined when bidding on new contracts. Key competitors include Go-Ahead Group, Arriva, Metroline, RATP, Transit Systems and Abellio.

The long-term outlook is quite positive with continuing population growth and the city’s plan to expand the network of bus services in London. In the near term, a weak economy and resultant drop off in shopping visits to the London High Streets has impacted revenues. Of course there is also the threat of Brexit and what that might do to the London financial district and the tourism industry.

The Company is a major player in the UK rail market. Through its principal rail subsidiary, the Company currently operates two rail franchises; SGC is currently short-listed to bid on a third franchise – the South Eastern franchise and is also jointly (with the Virgin Group and SNCF) bidding on a West Coast Partnership franchise:

I. South West Trains (47% of segment sales) – runs services in south west England out of London Waterloo railway station and operates Island Line services on the Isle of Wight. This contract expired in August 2017.

II. Virgin Trains East Coast (35% of segment sales) – SGC has a 90% share in the Virgin Trains East Coast business with the Virgin Group of Companies holding the other 10% share. The contract for this franchise went into effect in March 2015 and is planned to run through March 2023, with the option for a one-year extension at the discretion of the DfT. The business provides inter-city train services between London and a number of locations including Edinburgh, Newcastle, Leeds and York.

III. East Midlands Trains (18% of segment sales) – SGC has operated the franchise since November 2007. The business comprises of main line train services to London St. Pancras, regional rail services in the East Midlands area and inter-regional services between Norwich and Liverpool. The contract was to expire in March 2018 but the DfT has extended it through at least March 2019, with plans for a further direct award.

In addition to these three franchises, the Company also operates Supertram – a 28km light rail network incorporating three routes in the city of Sheffield, on a concession that runs through 2024.

SGC has a 49% interest in a Joint Venture (Virgin Rail Group holds a 51% interest) which operates the West Coast Trains rail franchise that runs through March 2018. The Company expects a direct award extension through at least March 2019.

While earnings from JV’s flow through and are reported below the EBIT line, in its disclosures, SGC does provide some additional insights into the operating earnings of the West Coast Trains rail JV:

The near-term outlook for the rail segment remains clouded as several high profile rail franchises are expiring soon and being rebid.

The following table brings together segment results and after accounting for corporate overhead, presents the consolidated financial performance of the Stagecoach Group.

SGC’s EBIT margin is below its 5 and 10-YR median. Looking at just the English comps (those that trade on the London stock exchange), SGC’s margin is also below the peer group median EBIT margin 4.41%.

In light of the binary nature of rail contract wins and losses, it is almost impossible to construct a DCF model. Based on my conversation with the Jefferies analyst, it appears the sell-side focuses on an aggregate EBITA figure (see page 12) and uses a multiples-based approach to value these types of business. However, in my opinion, there are some businesses that should be worth more than others, and hence, deserve higher multiples than others and/or the current aggregate multiple that the sell-side is using.

I have opted to use a SOTP approach to value the entire company based on what I think an informed buyer should be willing to pay for individual slices.