All amounts in Canadian dollars unless otherwise specified

TeraGo Inc. (“TGO”) is a differentiated and idiosyncratic bet on the value of wireless spectrum licenses in Canada. Unlike many other wireless spectrum investments which are very path dependent and require lobbying or petitioning the FCC or Canadian CRTC/Industry Canada for changes in the regulatory regime to repurpose spectrum in order to unlock value, TGO’s spectrum is already deployed for fixed wireless use, and Industry Canada’s  (now called ISED) recent decision on the 38 GHz band has already been announced (June 2019) with TeraGo’s holdings being preserved with new flexible use licenses.

Investors need to underwrite the value of the spectrum assets (with a high margin of safety mind you), taking comfort that Canada has a strong tendency to follow what the U.S. does from a technology perspective, particularly when it comes to wireless spectrum (with a delay of a few years).

The company has two main divisions (It is worth noting that TGO’s revenues from both divisions are recurring in nature, and if that’s your cup of tea, these businesses would most certainly qualify for that kind of treatment):

Provides a variety of cloud services, acting as a value-added reseller of AWS, VMware, Microsoft, and Mitel products. On the colocation side, provides hosting and managed hosting solutions with data centres in five facilities across Canada (Mississauga ON, Vaughan ON, Kelowna BC, and Vancouver BC).

This is the relatively newer business, with TGO pushing into this space in 2013 thinking they could cross-sell cloud & colo services to their connectivity customers (see below).

TGO delivers its connectivity service using fixed mobile (see picture above). This business requires direct line-of-sight to an access point, which if present, offers TGO the ability to connect a customer at a fraction of the cost of a traditional cableco or telco. Historically, this was a compelling proposition as TGO could connect customers/buildings which otherwise did not have broadband access. However, this segment been slowly declining over the last number of years, cabelcos and telcos have slowly rolled out fiber.

TGO delivers its fixed wireless service over spectrum licenses that they acquired at auction from the Canadian government in 1999. Specifically, they purchased 24 GHz and 38 GHz spectrum in  an open auction and paid a little over $3 million for a ton of licenses covering most of Canada’s largest cities (see auction details here: https://www.ic.gc.ca/eic/site/smt-gst.nsf/eng/sf01982.html#Number2).

As such, TGO is the single largest holder of mmWave spectrum in Canada, with 8.5 billion MHz-POPs:

mmWave Spectrum is the Future

Fast forward 20 years later, everyone is glued to their mobile screens and wireless data consumption is growing exponentially. Wireless remote access networks have basically built out coverage through populated areas, and the issue is now capacity. Therefore, wireless operators are shifting their focus from traditional low- and mid-band spectrum to so called “mm Wave” spectrum.

For a couple primers on the importance of mm Wave spectrum and how it is critical to 5G wireless networks, refer to the below sources:

In its acquisition of 600 MHz spectrum in April 2019 for $1.7 billion, Rogers Communications stated: “This spectrum will be combined with future 3500 MHZ and millimetre wave spectrum to create a global best-in-class 5G network across Canada.” I think this statement highlights the fact that the incumbents are already making plans for 5G with mm Wave spectrum as part of those plans.

At this point, it is worthwhile revisiting a very memorable company (whose path was anything but straight), and a very memorable VIC comment thread, Straight Path Communications (“STRP”): https://valueinvestorsclub.com/idea/STRAIGHT_PATH_COMMUNICATIONS/2721907799#description

For those who are less familiar, STRP was a company that held a ton of mmWave wireless spectrum licenses but was in all sorts of trouble with the FCC for failing to meet build-out requirements and was financially distressed (and was  actually the target of a Kerrisdale Capital short report see here: https://www.kerrisdalecap.com/investments/straight-path-communications-inc-strp-2/).

In January 2017, Straight Path settled with the FCC’s enforcement bureau and agreed to sell its licenses and remit 20% of the overall proceeds to the U.S. Treasury. What then followed was jaw dropping game of one-upmanship as AT&T and Verizon launched into a bidding war for the company.

STRP was trading at US$35/share in March 2017 on an unaffected basis. The initial deal was with AT&T at a price ofUS$95/share. VZ then entered the fray, and engaged in a multiple round contest with AT&T. STRP ultimately sold for US$184/share to Verizon, representing a +400% premium to its unaffected price.

STRP owned spectrum licenses located at 28 GHz and 39 GHz, very similar in frequency to TGO’s assets, and Verizon’s purchase price for equated to $0.016 per MHz per population (MHz-POP).

Recent U.S. Spectrum Auctions Illustrates that Demand for mm Wave Was Not a One-Off

The FCC recently completed two spectrum auctions (Auction 101 and Auction 102) where they sold 28 GHz and 24 GHz spectrum respectively. Notably, Auction 102’s sale of 24 GHz spectrum should be viewed as being a direct comparable for TeraGo. The entire Auction 102 fetched US$2 billion of proceeds, equivalent to US$0.009/MHz-POP. More importantly, licenses in the top 10 markets sold for US$919 million, equivalent to US$0.018/MHz-POP. I think that looking at the top 10 markets is a much better comparison as the U.S. FCC auction included 500 MHz of spectrum for every Partial Economic Area in the country including fabulous places such as Moberly, MO, and Juneau, Alaska (the sheer quantity of spectrum in these tertiary markets drives down overall averages).

Wireless Spectrum in Canada Trades at a Premium to the U.S.

Readers might question whether one can extrapolate the STRP transaction to Canada. It is useful to take a look at historical spectrum transaction values at major auctions (see table below). As you can see, spectrum in Canada has sold at a premium to the same assets in the U.S ranging from +8% to +153%.

This “Canadian Premium” phenomenon has held true for decades, and the reason for it is simple. The Canadian wireless industry operates as a very beautiful and textbook case study of an oligopoly. Their monthly pricing plans, hardware offers, and promotions are nearly identical across Rogers, BCE, and TELUS (referred to as the “incumbents”). The typical market “reaction” when one incumbent releases a new promotion is for the other two incumbents to match the offer literally the next day (see this in action this year here: https://www.kelownanow.com/watercooler/tech/news/Technology/Bell_and_Telus_quickly_counter_Rogers_new_unlimited_data_plan/) . As such, true competition is nearly non-existent, and all members of the oligopoly benefit from disciplined pricing behaviour (at the detriment to the consumer). See below for this in graphical form:

The incumbents want nothing more in the world than for their oligopoly to continue. As a result, they have employed a “defend the fortress” mentality when it comes to purchasing strategic assets and keeping them out the hands of a potential new entrant. Their stock prices tend to crater at the whiff of a foreign competitor potentially setting up shop in Canada (see here: https://www.thestar.com/business/personal_finance/investing/2013/06/26/canadian_telco_stocks_drop_after_report_verizon_has_offer_on_table_for_wind_mobile.html)

It is worth highlighting a couple transactions in Canada that further illustrate this.

AlarmForce provided home security systems in Canada. It was a small business and sub-scale in an industry which requires a large subscriber base in order to leverage economies of scale (in operations, tech support, customer service, purchasing, etc).

For context as to where home security companies transact for, ADT is the largest player in the space and sold to Apollo Global Management in February 2016 for US$7 billion, or 6.5x EBITDA. Apollo then merged ADT with Protection 1 Security Solutions to create a US$15 billion behemoth which was then brought back to the public markets a short time later.

On November 6, 2017, BCE announced the acquisition of AlarmForce for $184mm, or 19.6x EBITDA, representing a 71% premium to the previous day’s unaffected stock price… 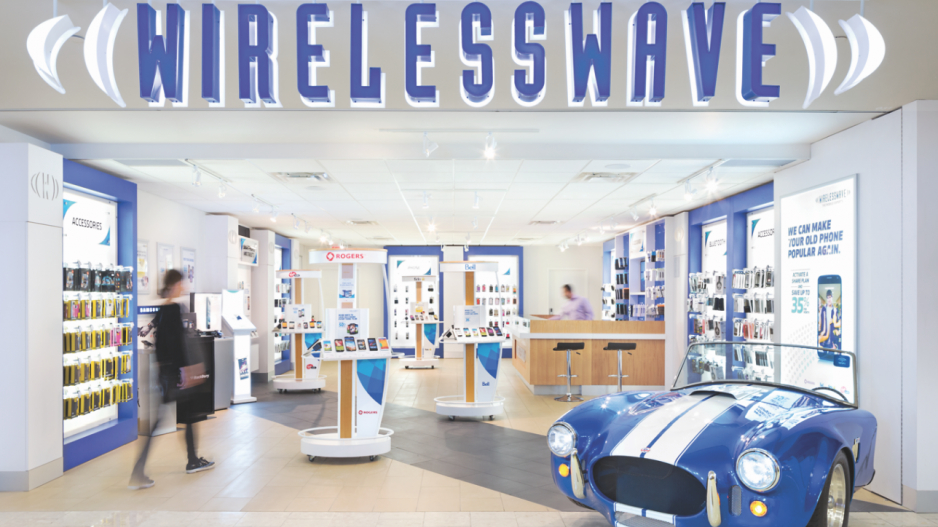 Glentel was a multi-carrier mobile phone retailer operating in Canada, U.S., Australia & Philippines. The company had 494 retail locations in Canada. Non-exclusive point of sale retailers have historically not been regarded as strategic, as evidenced by some of the multiples that Glentel itself paid for assets:

On November 28, 2014, BCE announced the acquisition of Glentel for $670mm, representing an EV/EBITDA multiple of 11.2x and a 109% premium to the previous day’s trading price.

To further illustrate the value of “strategic” assets in Canada, Rogers filed an injunction with the Ontario Superior Court of Justice in an attempt to block the sale of Glentel to BCE (see here: https://mobilesyrup.com/2014/12/17/rogers-files-an-injunction-with-the-ontario-superior-court-to-block-sale-of-glentel-to-bell/).  Ultimately and in true Canadian oligopolistic fashion, BCE and Rogers agreed to share the Glentel asset 50/50 and the injunction was dropped.

Recent Events & A Stumble (or opportunity..)

On June 6, 2019, ISED (formerly Industry Canada, the Canadian federal ministry responsible for radiocommunications) announced important details clarifying the timing for the release of certain spectrum bands. Specifically, 38 GHz spectrum has a target timeframe for auction in 2022.

While ISED has not made any clarifications with regards to TGO’s 24 GHz spectrum, I think it is simply a matter of time given that the FCC just auctioned off 24 GHz spectrum in Auction 102 earlier this year.

On the back of the positive development, TGO announced a bought deal offering of 700k shares with a shoe of 105k. The UOP is to fund technical and customer trials related to 5G technology. In conversation with the company, management has explained that while they did not necessarily need the cash imminently (they are free cash flow positive, and the 5G trials should only cost a few hundred thousand dollars), but opted to improve their balance sheet such that they are in a position of financial strength. To me, this makes sense given my theory that this company will eventually get acquired by an incumbent. The bought deal took the share price down from near $13 to under $9 today… hence the investment opportunity.

TeraGo is the largest holder of mm Wave spectrum in Canada. Similar assets in the U.S. have generated significant strategic interest both in terms of corporate M&A as well as bidder participation in FCC spectrum auctions. I believe an investment in TGO is a unique and idiosyncratic bet that the Canadian markets will behave in a similar manner, as they have every other instance in the past.

The “defend the fortress” effect on strategic asset pricing in Canada has been well documented in academia and by consultants, and I think that a strategic prize such as TeraGo with its 8.5 billion MHz-POPs will be regarded as critically important by the incumbents.

After deducting for the company’s small amount of net debt, we get to target prices of $15.41 on the low end, and nearly $23 on the high end. Although the premium to the current share price seems large, keep in mind that we are talking about less than $400 million in total enterprise value which is less than what Glentel the multi-carrier retailer traded for, and would be a drop in the bucket for any of the incumbents.

Note that while the stock may appear illiquid, it trades in blocks by appointment. TD Securities has the box on trading and knows where all the holders. One can likely buy a few hundred thousand shares without too much difficulty.

Are you sure you want to close this position TERAGO INC?

Are you sure you want to Flag this idea TERAGO INC for removal?